The Italian company Extrema Ratio is famous for their specifically designed knives which are extremely popular among special forces and SWAT teams worldwide. At first used only by the Italian commandos in Iraq and Afghanistan, these fine blades drew attention of professionals from other NATO armies. Today, a few European armies issue Extrema Ratio knives to their elite fighting units. As civilian knife enthusiasts often draw inspiration from the military sources, these knives became popular among collectors, despite their high price. Their quality is indisputable, while the beauty and the personal preference is always shaped by the marketing experts. The usefulness of these knives on daily basis is still disputed by the classic design fans and defended by the followers of the industrial design “new wave”. Both groups have strong proofs for their cases. The company is aware of this problem, so it is constantly trying to respond to the users’ objections and complaints, while sticking to the original, aggressive design which made Extrema Ratio knives popular at the first place. Besides supermodern knives and daggers, the people at Extrema Ratio know how to implement proven solutions enhancing them in the process and these days you can find decades old designs, built using modern materials and technology. This policy gave birth to Cn-1, Adra, 39-09, MK2.1, Primo Corso, etc. 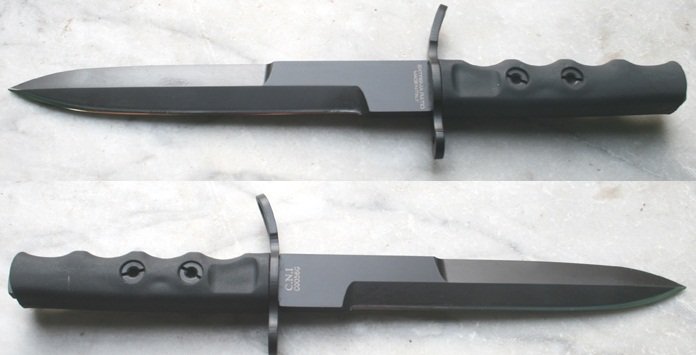 The formidable diving knife named DICOK (DIving COmpact Knife) was developed with experience of army and civilian diving experts. The aim was to design an essential and crafty tool, with the stress on multiple carrying and deploying positions, which in some scenarios might be a lifesaving advantage. Being a utility knife rather than combat knife, the DICOK has a chisel-style tip, as the most useful for diving purposes. The special tempering process and the surface plasma treatment provide good saltwater resistance, but also increase blade flexibility, preventing the breaking under stress. The handle and the guard remind of a Suppressor combat dagger. The pommel has a built-in slit for a bright yellow nylon band which secures the knife in all positions, but its friction clasp enables quick deployment. The knife can be used as an improvised wrench for the first stage of the oxygen tank regulator. The knife is carried in a sheath with the Kydex core and strong cordura with neoprene cover, which can be attached almost everywhere from the forearm to the assault pack with molle attachments. All these features make it one of the best diving knives around. 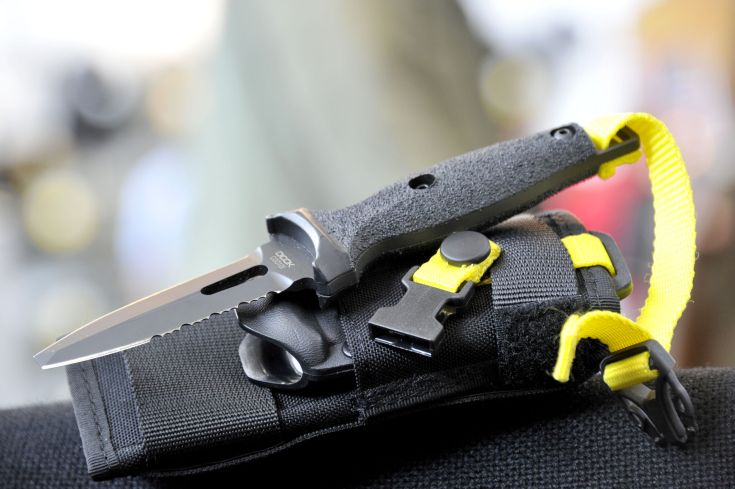 Since the first legendary model K-1 from the 1997, four series of Dobermann combat and utility knives saw active duty. The Dobermann IV is a strong built and ubiquitous knife, which would excel in camping or hunting as well as in brutal survival conditions, self-defense and a combat situation. Despite its thickness, the 185 mm long and 43 mm broad blade has an excellent geometry which combined with flat grind makes cutting efficient as it gets. Slight recurve improves the balance in swing cutting, while the long swedge makes it a dangerous stabbing weapon. Due to the weight of 360 g, the Dobermann IV can be used in a light hatchet mode. The extended ricasso and the bared tang feature two holes for a lanyard or any kind of rope attachment, with a number of useful options. Besides the combat version with black protective finish and Kydex sheath, the Dobermann IV comes in a satin variant with quality leather sheath. All in all it’s a powerful and well designed blade with many applications but the price of $540 will hold many potential buyers at bay. 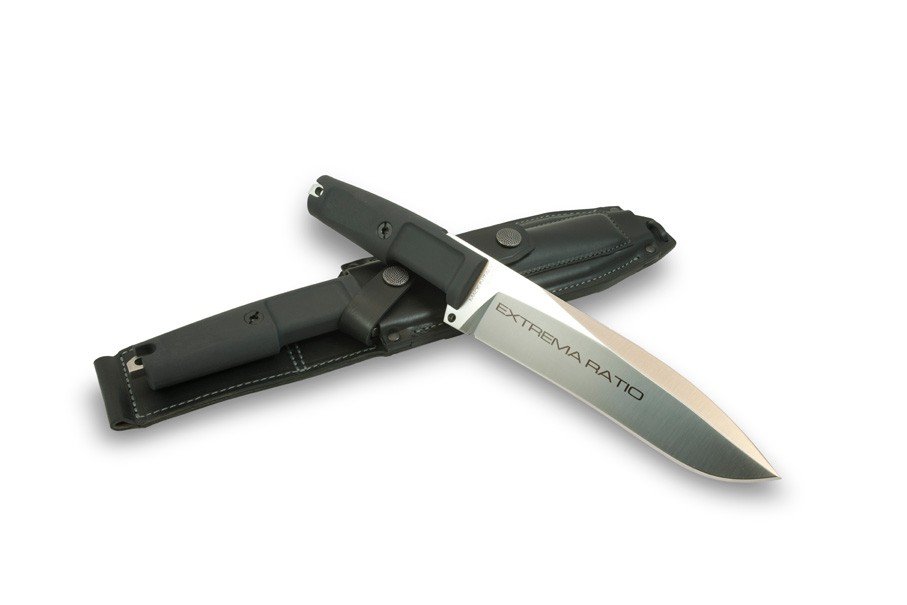 The last but not the least is the deadly E.R. Commando which comes in two versions, with satin and black (Testudo) finish. It is based on the legendary British Commando WW2 dagger, which is even today used as a symbol of special forces in all Commonwealth states and beyond. The shape and dimensions remained the same, but the 165 mm blade steel is not the Lee-Enfield bayonet surplus anymore. Now it is 6.5 mm thick Boehler N690 Cobalt Stainless. The handle, which used to be annular shaped brass, now is made of grippy cold forged aluminum alloy. The transition from brass to aluminum significantly reduced the weight, so that the 290 mm dagger weighs only 165 g.  The sheath also follows the original, but the high quality leather is thicker and resistant to the elements. The knife can be field striped for maintenance without any tools, just by unscrewing the pommel . 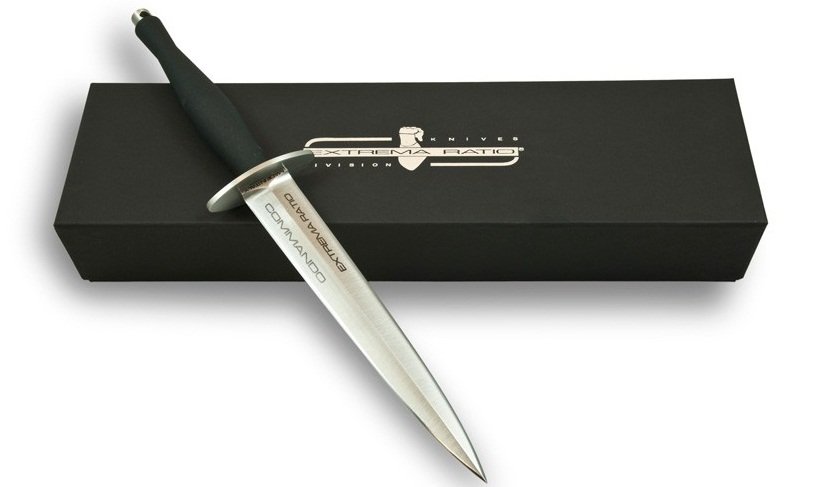 In 1981, the U.S. Army colonel James “Nick” Rowe developed a course called SERE (Survival, Evasion, Resistance, and Escape), aimed at training Special Forces commandos to use their individual skills to evade capture or escape from a POW situation. An important part of the SERE kit is the knife. Many legendary knife designers came with their vision of the perfect SERE knife, so we had the Loveless Chute Knife , Randall Mod. 15 and Al-Mar SERE Folder.

The Extrema Ratio response is a unique one, developed with special forces instructors and martial arts experts, as well as masters of survival. The Extrema Ratio SERE 1 is a combination of the push dagger and the multitool, capable of cutting, piercing, and many other things. Originally made as a concealed blade capable of a sudden lethal thrust, the first glance tells us that this is an unusual concept. Its short blade is positioned between the middle and the index finger of a clenched fist, it’s easy to perform a precise slash or stab, and the grip transfers all the force behind it to the tip. Besides, disarming a fighter with a push dagger is close to impossible. What is more, the medical records confirm that a knife like this can be held and used even in an injured hand, which is a likely SERE scenario, and the main reason behind the push dagger design of the new survival knife. With its weight of 305 g and 115 mm blade, the SERE 1 is unexpectedly big for a push dagger. The straight lines and triangular tip make sharpening easy even for an inexperienced user, who may have to use a stone from a nearby creek, a piece of sandpaper or a shard of a ceramic plate. The slit in the blade is useful for unscrewing or tightening  wing nuts, while the very sharp hook is handy for cutting paracord or rappelling gear. The massive super-grip handle is comfortable as it can be, with a tungsten carbide spike for breaking the safety glass. With its tactical Kydex sheath, the SERE 1 is an extremely useful piece of equipment, but for a limited number of users who may have to deal with unpredictable and dangerous circumstances on daily basis. In Europe they sell for around $360.