In 1847, Captain Walker wrote to “Colt” saying, “Nine out of ten men in our parts know nothing about your weapons, and, although I tried to explain all the superiorities of your revolver when compared to Ethan Allen revolvers, they keep ignoring your guns.” Ethan Allen was born on September 2nd, 1808 in Massachusetts. From an early age, he worked in a local factory, only to move out to Grafton in 1832 where he opened a small workshop making knives and hand tools.

His first taste of gunsmithing was single-shot shooting sticks. Sportsmen and hikers loved these canes so together with his brother-in-law Charles Thurber, he founded “Allen & Thurber” company in Norwich. Slowly, they expanded their program to mechanisms, barrels and stocks, when they moved their business to Worcester in 1834. They involved their cousin T.P. Wheelock, so the company bore the name “Allen, Thurber & Co” until 1857. When Thurber stepped out, the company was run under the name “Allen &Wheelock” until Wheelock died in 1864. After that, Allen introduced his in-laws into the business named “Ethan Allen & Co.”

In Allen’s time, the nation was expanding rapidly. The frontier was pushed to the West and new territories were settled. This was the golden age of capable gunsmiths. Between 1845 and 1862, Allen protected whole nine patents, when the first double-action pepperboxes earned him great popularity. In the mid-19th century, a metal casing concept was still in its infancy, but Allen patented the first machine for making metal casings that put the whole world on attention. Despite the merciless competition, he managed to expand his business and his wealth. His houses were like royal manors, and he died in one of them in 1871. His stepson and a family friend said at his burial, “All of his creations are genuinely simple, which is the signature of a truly great inventor.” And the press articles highlighted Allen’s contribution in making Worcester a modern industrial town. 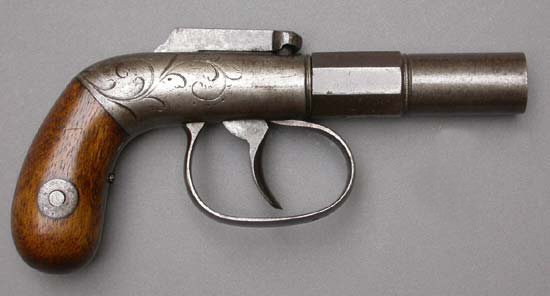 The most interesting chapter in Allen’s life was the making of pepperboxes. The concept was known for more than a hundred years, but in the era of complicated flintlocks, it wasn’t really effective, nor popular. With the advent of the percussion cap system, they saw much more popular as many gunsmiths started to make them. A percussion pepperbox is made of a group of barrels that rotate around a single axis, moving one after the other in the firing position. Every barrel was muzzle-loaded with gunpowder and the lead shot, while the primer was set on the piston caps at the breech of every barrel. Once fully loaded, a pepperbox can fire as many times as the number of its barrels, which was a huge advantage to single-shot pistols.

Ethan made his first pepperbox in 1834 and in 1837 he patented a revolutionary self-cocking trigger action (DAO). The hammer is shaped like a bar without the spur. In no time, Allen’s pepperboxes became a hit in the States, as he manufactured more of these revolvers than all the other gunsmiths combined. They were handy, well-made guns. The barrel block was drilled in a single cast iron piece, the frame was engraved and the handles, designed for pocket or purse carry, were made of lacquered walnut. The customers were offered versions with four or six 63 or 152 mm long barrels, chambered in calibers from .28 to .36. All metal parts were blued. A metal bracelet-shaped shield fits snugly over the piston area, preventing the caps from falling off, but also preventing sparks from jumping from one piston to the next.

Although these were not true Allen revolvers, pepperboxes were simple and cheap guns, ideal for close ranges and the possibility of firing several follow-up shots at one loading kept the muggers at bay. Still, they were hopelessly inaccurate, virtually useless at longer ranges, including the larger Dragoon models. As the time passed, revolvers with a single fixed barrel and reduced weight pushed pepperboxes out of the fray.

In 1845, Allen patented a percussion revolver, based on his pepperbox mechanics. Except for the DAO firing mechanism, the revolver inherited the banhammer system, trigger shape and handle designed for pocket or purse carry. The octagonal barrels were 56 or 99 mm long with calibers .28 or 34. The cylinder was smooth on the outside, often nicely engraved, with deeply cut holes for pistons. In order to be cleaned and loaded the cylinder must be taken out of the frame. These guns are also called transitional revolvers, a phase between pepperboxes and the true revolvers. Intended for personal protection, they never reached the popularity of pepperboxes.

Allen was also manufacturing other firearms, using his proprietary technology. Some 30 years ago, a wreck of USS Cairo, a Union Navy ironclad gunboat was salvaged from the bottom of the Yazoo River, where it sunk upon hitting a Confederate mine in December 1862. In officers’ cabin, they found a well-preserved Allen single-shot percussion pistol. After the transitional models, between 1857 and ‘58, Allen began manufacturing true percussion revolvers that were recognizably by the outer hammer located on the right side of the frame. These single-action revolvers had a simple construction with the closed frame, octagonal barrel, smooth walnut handle scales and simple set of sights. The base pin is inserted from the back, through the back part of the frame through the cylinder, and it was locked into place or released by a button on its end. The base pin had to be pulled out for cleaning or loading, so the cylinder can be released. The trigger guard was separated from the frame and by pushing it forward actuated a bar hidden in the frame which acted as a ramrod. The metal parts were blued, except the trigger and the guard that were polished white. These guns were mass-produced in countless versions in calibers from .28 to .36 and the barrel length from 70 to 203 mm. They were largely sold to civilians.

Responding to the Union Government call for bids, Allen designed a robust, well-balanced and reliable percussion army revolver. Following the tradition, the .44 caliber models were called Army, and those in the .36 Navy Model. Both were characterized by centered hammer, SA operation, closed frame with the base pin that is inserted at the front and lack of engraving. After a series of trials, the company delivered the first 500 units. As the war ended shortly after, all further deliveries were canceled, focusing Allen once more on the civilian markets.

The introduction of the metal casing and integrated cartridge revolutionized the development of firearms. The single legal user of the Rollin White patent was Smith & Wesson. As the patent included the cylinder with chambers along the whole length that could be accessed on both sides, the other companies were virtually disabled from making revolvers with new ammunition. On September 25th, 1860, in order to circumvent the restrictive patent, Ethan Allen patented an original integral cartridge that was, in fact, a variant of the rimfire cartridge, with the modification that the fulminate was not arranged along the whole length of the rim but concentrated in one jut (lip-fire system). For every lip to be set in properly, every chamber has to have a fitting indent at the back end which facilitates the contact of the hammer and the lip. Between 1860 and 1863, “Allen & Wheelock” launched a few interesting .32 models named No. 52 Allen Lipfire.

These revolvers inherited the mechanics, dimensions, outer finish and handle shape of the previous models. The loading gate was located on the left side, while the ejector rod was integrated into the frame. Along with the smaller models, the company launched a smaller series of larger models with the centered hammers. These robust, well-balanced and accurate models were based on earlier army revolvers. They were offered as Navy Model in .36 (No. 56 Allen Lipfire) and Army Model in .44 (No. 58 Allen Lipfire). However, the following Smith & Wesson lawsuit outlawed the further production of Allen Lipfire revolvers in 1863. 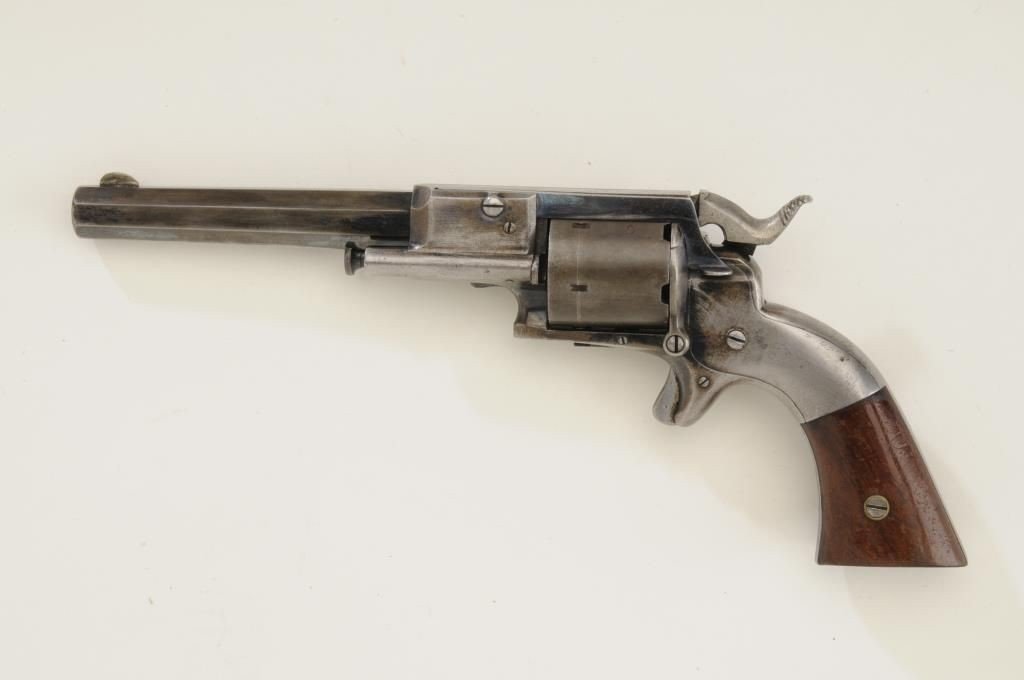 With no options left, Allen made a bargain with the patent proprietor and reestablished the mass production of revolvers, adapted to regular rimfire ammunition. Once more, he focused on small-size revolvers chambered in .22 or .32 with SA operation, side hammer, octagonal barrels and the trigger with two side plates acting as the trigger guard. It retained the recognizable handle shape, outer finish, sights and inscriptions. It was surprising that the cylinder still had to be removed from the frame for cleaning and loading, a feature that slowed the handling but made it simple and cheap to produce.

Luxury models were extremely rare, with one finding its way into President Lincoln’s inheritance. Allen’s companies also mass-produced various single-shot pistols, double-barrel shotguns and revolving rifles using their proprietary patents. This is the reason why all their models were simple to produce and competitive. Their guns were worth the money they were paid for. Unlike other gun-making companies that experienced ups and downs, Ethan Allen used his vast array of models to adapt to the current situation and his business was growing constantly.