Putting signs saying something in the lines of ‘Guns are welcome’ seems to be a favorite pastime of many a local business owner. Recently, a Maryville restaurant went viral with their sign, and now a printing company from East Tennessee claims to be swamped with sign printing of the same kind.

Sharma Floyd of the Shiloh Brew and Chew was the one who put up the paper signs some months earlier, even though she does not carry a gun. The business is booming since then, she says. They had to hire seven extra hands, and chose to upgrade to colored, permanent signs, by Red Eye Printing.

The small business is run by Phillip Davis, who says: “We’re not going to retire off of these signs. But the good thing about it is it gets awareness out there for the Second Amendment rights.” The gun-friendly signs go for anything between $5 and $20.

One of the people interested in putting out a sign encouraged by Sharma’s story is Richard Clear, who runs Clear’s Silat, Kung Fu and Tai Chi. “It’s great that she posted the signs. She’s really encouraging the law abiding citizens to do that, which is our right in this country,” he says. “I should have my sign in the next couple of days.” 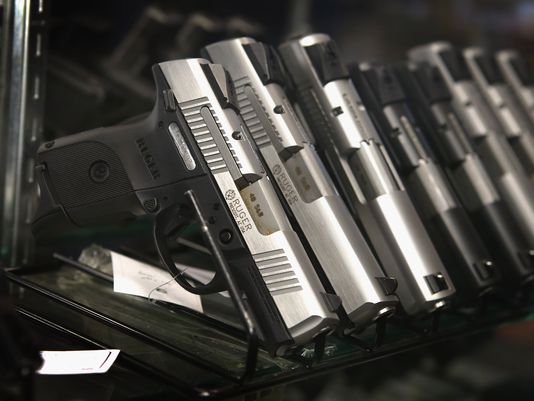 Sharma’s family friendly restaurant had to start creating their own merchandize since people have been asking about it. A lot of people came to show their support, as far as Kansas. Sharma is practically in tears when talking about it all.

“People come in here hugging me and shaking my hand, thanking me for supporting our Second Amendment. And it’s creating new jobs here in Tennessee, and I hope other business owners from across the country order the signs from Sevierville.”