It is yet to be seen whether concealed carry will see the light of day on campus, as a recent poll found that more South Texas College students are against concealed handguns on campus that support the concept. For the last two sessions, Texas lawmakers have drawn the bills that would allow packing heat on college or university campuses.The two bills pending are Senate Bill 182 and House Bill 972.

The college’s Student Government Association conducted the survey in response to House Bill 972, which has shown that 65 per cent of students oppose having concealed weapons on campus. The survey included 558 of the 30,000 college’s students.

Denisse Carreon, president of college’s student government at the Mid-Valley campus, said that “The general consensus is that students would feel unsafe, and many worry that it would affect their everyday life on campus. Of course, there are those that are for concealed handguns on campus, but they are in the minority.”

Paul Varville, the college’s director of safety and security, reminded that the college was the site of a fatal shooting in 1998, when two people attacked the cashiers as they accepted the tuition money. The gunmen shot and killed an armed security guard after he drew his weapon. The suspects fled to Mexico
and have not been caught. 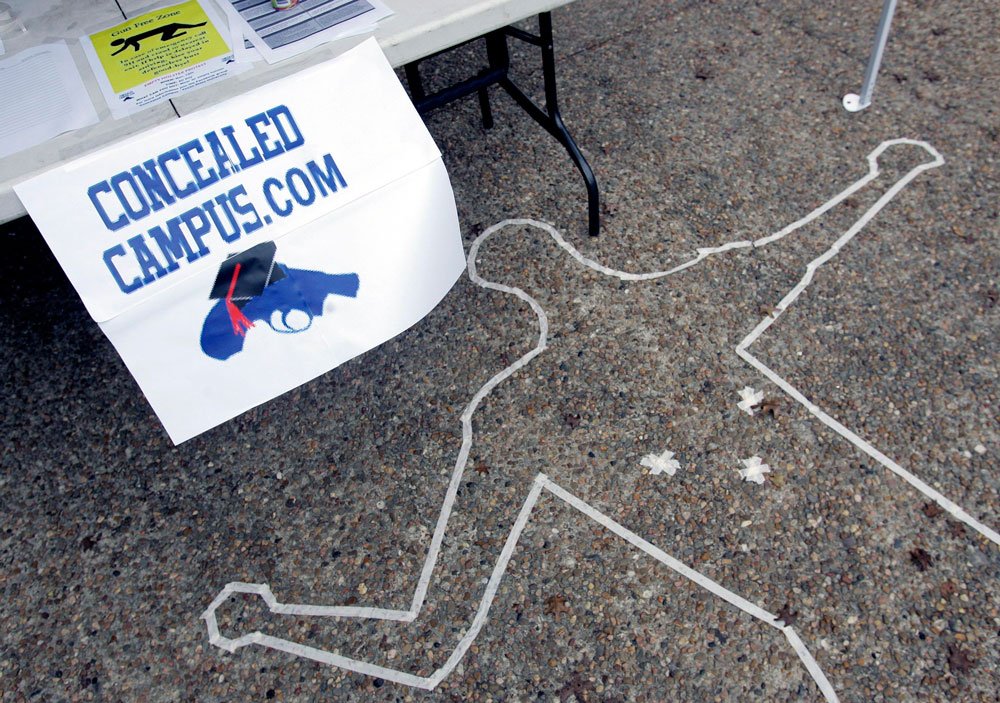 The college sent a position paper to state lawmakers on the issue, as Varville and officials at the University of Texas-Pan American confirmed that campuses have expressed their stand against concealed carry.“What we said to them was we believe it would not increase safety on campus and it would be more likely to increase violence or collateral harm and could create potential liability and administrative costs for higher education institutions in Texas,” said Varville.

University president Robert Nelsen said that he is also opposed to guns on campus. He is backed by university faculty senate, staff senate and student government, which all passed resolutions this year expressing the same sentiment.

Nelson supported his claim by citing the kidnapping of a student last year. “If somebody had pulled a gun at that point and tried to do it, there would’ve been carnage throughout the whole parking lot,” he said. “I have professional police on my campus. They do carry guns. I don’t need faculty to carry guns.”

On the other hand, the McAllen/Hidalgo County Tea Party Association hosted the Texas school superintendent this week, who filed the “Guardian Plan” – a policy that has allowed some teachers to carry weapons at the rural Harrold school district since 2007.

Superintendent David Thweatt spoke to about 20 people at Church of the King about his district’s Guardian Plan. Commenting the federal Gun-Free School Zones Act, which has been enforced since 1990, he said that “In 1990, we basically hung a sign on all of our schools that said: ‘Here are our most precious possessions in the world and they are not going to be protected.”

The small rural district about 180 miles northwest of Dallas adopted the policy in October 2007, which allows teachers approved by the school board to obtain concealed handgun licenses at the district’s expense, as well as extra training and ammunition. While on campus, the select group of teachers must have possession of their guns at all times and must use a certain type of ammunition designed to prevent collateral damage.

“Schools are easy, because basically we have a sign that says: ‘This is a safe place — for you to come and kill,’” he said.

Thweatt added that advantages of the Guardian Plan are numerous as they include backup for security guards, the anonymity of a concealed handgun, protection for all entrances and cost savings. Thweatt said the salary of one security guard for a year is the same amount the district spent on training more than 20 “guardians.”

He said that as America moved from a predominately rural nation to becoming more urbanized, the country is changing views on guns to the effect that the culture became less “do it yourself.”
Images with courtesy of crimeblog.dallasnews.com, www.valleymorningstar.com and www.fitsnews.com.