The Kel-Tec company made its name by making innovative, avanguarde weapons, such as KSG shotgun, RFB rifle, and SU carbine series. It has recently developed their latest products, the RDB and M43 rifles. The first model, the RDB looks very modern while the M43 has a more “old-timey” feel and still has all the modern and innovative characteristics of the RDB.

Some weapon designers point to the Kel-Tec RFB rifle as a way forward with weapons that use heavier ammunition such as 7.62×51 and want to reach greater range than other rifles. According to Kel-Tec, the secret is in the bullpup configuration which can have longer barrels while maintaining the same bulk. Longer barrels allow for more efficient use of gunpowder gases, especially when slower and more aerodynamic ammunition is being fired. The RFB rifle makes the standard 7.62×51 ammunition perform like .300 Winchester Magnum, a significant improvement. 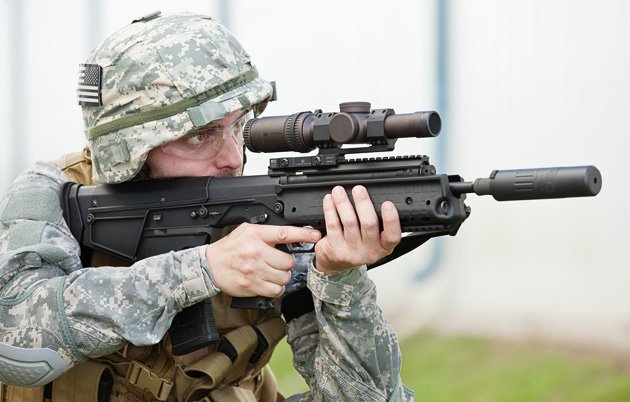 Due to the success of the RFB, it was only a matter of time for Kel-Tec to release a bullpup rifle using 5.52×45 caliber. The latest weapons developed by Kel-Tec are the RDB semiautomatic rifle and its retro variant M43.

RDB stands for Rifle Downward-ejecting Bullpup. At first glance, this rifle looks a lot like a shrunken RFB. However, the mechanism differs in a few significant ways. Both rifles use short stroke piston system which prevents gases from penetrating the hull. This reduces tarnishing and heating of the interior of the hull and mechanical components. While RFB uses oscillating extractor and ejection above the main barrel of the weapon, RDB uses a rotary bolt with a spring-loaded ejector and an extractor. The spent case is pulled backward along the top of the magazine and then ejected downwards. While RDB system is more conventional and case ejection is faster and simpler but the whole mechanism is somewhat larger. Fortunately, that does not affect the rifle much, it is still a compact and light weapon. 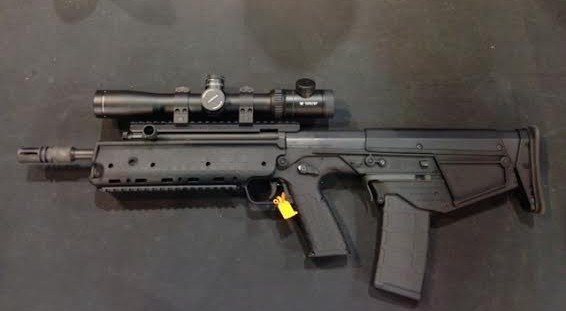 RDB has two Picatinny rails, on the top and bottom sides of the barrel, allowing for mounting of all kinds of sights or other addons.

The barrel is 442 mm long (17.4 inches) while the total length of the rifle is 696 mm (27.4 inches). If automatic fire was to be added to this weapon, it could become an excellent compact alternative military rifle. It weighs only 3.2 kg (7 pounds).

The rifle uses standard AR-15/M16 magazines. They typically hold 30 rounds but there are some alternatives, such as SureFire quad-stack magazine that can hold up to 60 rounds. It is marginally longer than the standard 30 round magazine but its lower part is divided into two sections, each of them being double stack. The higher capacity definitely seems worth the cost in terms of added length and weight. There is also a 100 round variant but it is much longer and might not be suitable for all firing positions.

M43 rifle was the last thing anyone was expecting from a weapons manufacturer like Kel-Tec. The retro looking rifle just doesn’t fit in the catalog of modern and almost futuristic weapons made by the company. The M43 looks like a Soviet weapon made during the cold war. Its mechanism is identical to the one used by the RDB and all parts are interchangeable between the two rifles. However, instead of cast polymer, M43 is made from rough and stamped steel sheet metal. Its rough finish and wooden parts make it look almost like it has been made from scrap metal. Instead of Picatinny rails like RDB, M43 uses classic folding sights.

Both rifles have identical length barrels but differ slightly in total lenght. M43 is around one inch shorter while being heavier (due to the use of classic materials); it weighs 3.6 kg or almost 8 pounds. They also have different muzzles, RDB has a classical flash suppressor with radial slits on the top side that also serves as a recoil compensator while M43 has a gas break that direct gunpowder gas to the side like the AK-74.

While RDB definitely seems oriented towards people who want the modern, sleek, military look the M43 is meant for collectors who want something unique and exclusive. At the costs of $2,000 and $2,300 respectively, they should find their niche with people who don’t mind paying extra for great performance (or stylized retro look in the case of M43).