Kimber Raptor 2 Review – unlike the other Colt M.1911 clones, the new Kimber Raptor II stands out with its unique individual look. When it was completed, the designer team gave it the nickname Crocodile Dundee Gun. And not without a reason. Instead of checkering, the handle is scaled, Instead of typical ribbed grip surfaces, the slide has a reptilian skin pattern. All these features combined are reminiscent of a prehistoric reptile, so people in “Kimber” decided to name this model Raptor, which is shortened for Velociraptor, a fast and voracious predator.

Although “Kimber” is the biggest supplier of M.1911 pistols, Raptor II is not a part of the standard production program. It was developed by Kimber Custom Shop. This is not the first reptilian model from this company. In late 2004, “Kimber” presented Raptor II and Pro Raptor II, M.1011 models with 4 and 5-inch barrels. May 2005 saw Grand Raptor II with a two-tone finish and 5-inch barrel and Ultra Raptor II, a compact version with a 3-inch barrel. 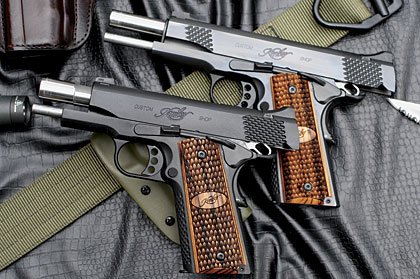 Once again, “Kimber” designers showed that an ancient M.1911 design can still be retouched for an outstanding effect. Under the hub, everything remained the same. As with every company that makes legendary Colt M11 reproductions, “Kimber” sticks to the tried and tested construction that has endured for more than 100 years, being constantly improved over time. When it comes to the 5-inch barrel .45s, you either love them or hate them. “Kimber” owner claims that Raptor II is a perfect general-purpose pistol, with a classic look. This company is known for its high-quality production standards, which grant high accuracy and reliability. 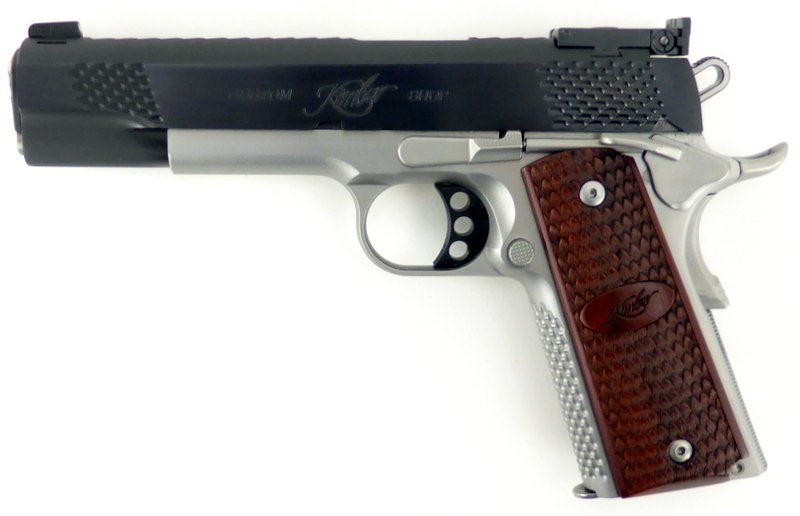 There is still room for improvement

Still, Raptor II is not fitted like a Swiss watch. There is a bit of play on the slide sides, while the barrel has some tolerance in the breech section. These however are not the lack of final quality control, but the desire to make a pistol that will work in all conditions. On the other hand, there is a relation between accuracy and reliability.

All service pistols, including Colt M.1911, have tolerances that are unacceptable for sport shooters. However, these models are made for use in situations and harsh conditions when proper maintenance is not always possible. For sport shooters, on the other hand, the most important feature is accuracy. That is why sports models are manufactured with minimal tolerances between the bolt assembly, barrel and receiver, which are crucial for accuracy.

The rest of Raptor II features also reflect the general-purpose philosophy. Its aluminum trigger features the trigger stop, 1800 g force of pull and very clean travel. The gun has an ambidextrous safety which is necessary for service pistols, with clear markings. The iron sights can be adjusted for windage only and are equipped with fluorescent inserts for aiming in low light conditions.

In the end, we can all agree that the biggest selling point of Kimber Raptor II is its outlandish look, which will attract a number of reptilian fans. In a way, it can be compared to a car with a ton of extra features. It won’t be faster, it won’t be more comfortable but it gives more pleasure in driving it. And it will draw attention wherever it shows up.