A new Pew Research Center poll has shown that almost 75 per cent of Americans believe Congress should pass a  revised Senate bill to expand background checks on gun buyers. Despite their enthusiasm, nearly 60 per cent of the US residents say they doubt that Congress will pass any significant gun laws this year – which was the actual goal of President Obama following the mass shooting at Sandy Hook Elementary School in Newtown, Conn. 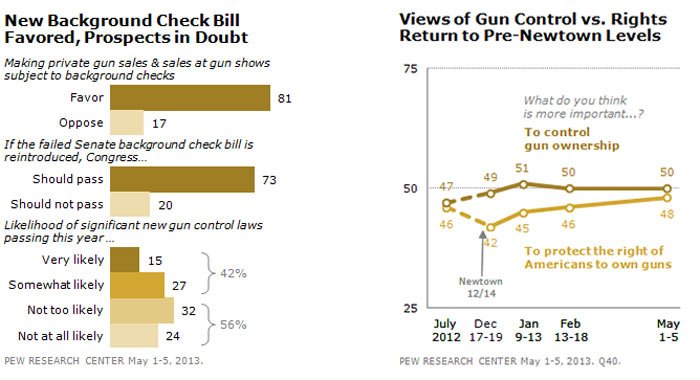 In April, the Senate turned down a plan proposed by Senators Joe Manchin, D-W.Va., and Pat Toomey, R-Pa. (known as bipartisan plan), that would bring two opposing sides to terms, and regulate  firearms sales at gun shows and on the Internet. The measure ground to a halt because of the universal background checks Obama proposed after 20 children and six adults were killed Dec. 14 in Connecticut. The National Rifle Association had opposed the background checks bill as “misguided.” 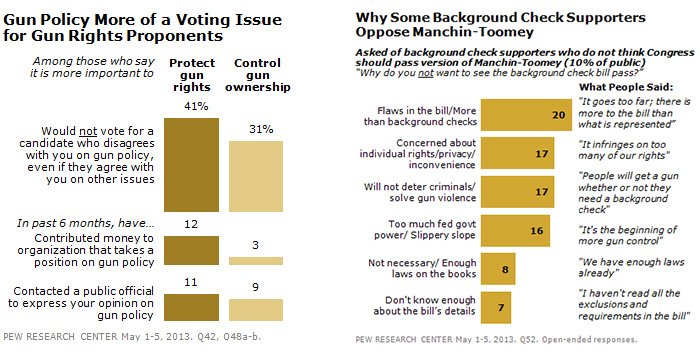 Senate Majority Leader Harry Reid has frozen the gun-control measures this year, as advocates try to gain more support. Sen. Manchin told CBS News earlier this month that advocates will need  “make some adjustments” to the bill and find out where the comfort zone is.

The Pew poll of 1, 504 adults was taken May 1-5. The margin of error is +/-2.9 percentage points. On the partisan breakdown on the Senate bill, the margin of error among Republicans is +/- 5.7 points and about 5 points for Democrats and independents.
Graphs with courtesy of people-press.org. Images by norcalblogs.com and cbsnews.com.