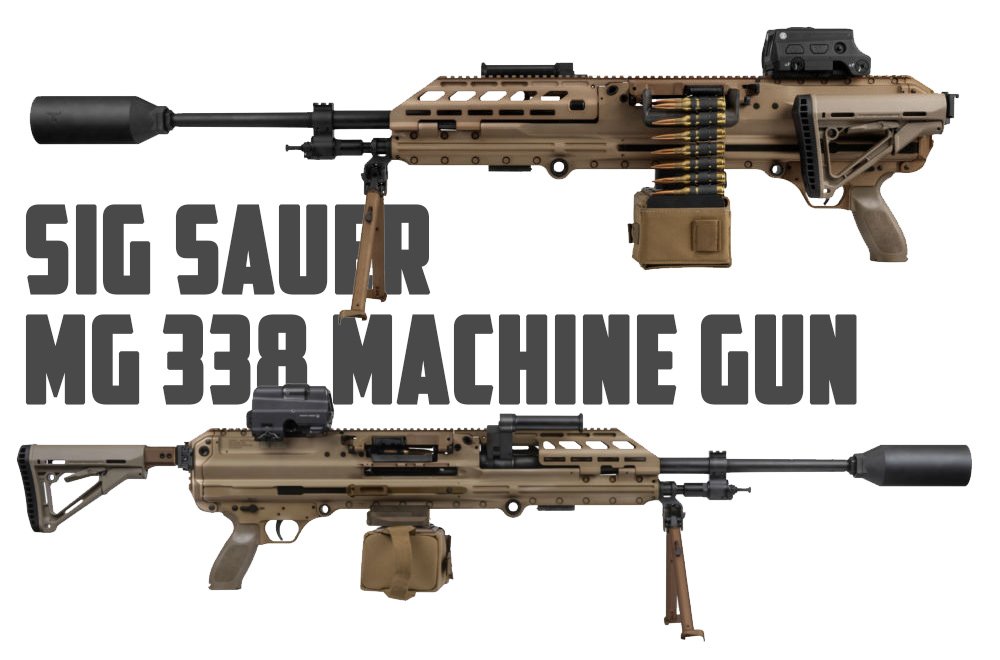 In January 2020, the Special Operations Command officially certified and purchased the latest SIG Sauer machine gun, the MG 338. This impressive weapon combines the weight of a general-purpose machine gun with the range of a heavy one.

Hybrid “brass + steel” case increases energy output by 50-60% and reducing the weight of the ammunition for at least 20%.
Ron Cohen – CEO – Sig Sauer

Armed conflicts as proving grounds for

Combining relatively low mass with high firepower and range is the ultimate goal of all firearm designers. This principle is used for all types of firearms, but it’s machine guns tend to be the type where it’s most difficult to strike the right balance. Weight is one of the big problems: they usually weigh around 20 lbs., which, when a sufficient ammo supply is factored in, is the upper limit a soldier can carry for an extended period of time. Another problem is the need for the aforementioned “sufficient” supply of ammunition. The feeding system is the biggest hurdle that needs to be cleared here. The absolutely best solution is the belt system with drums coming in second; magazine-fed systems are “practical” only when it comes to machine guns derived from assault rifles. In addition, there’s a tendency within infantry squads to use the same type of ammunition for both assault rifles and machine guns, which makes logistics much simpler.

All of these challenges gave birth to a multitude of solutions, and the best indicator of success seems to be practical use in many local armed conflicts. While lower caliber machine guns by far the lightest, their performances leave a lot to be desired – they just don’t offer sufficiently longer range and increased penetration over assault rifles. As for the feeding, nothing really compares to belts, drums and magazines just aren’t a good enough replacement. That’s why most armed forces around the world continue to use 7.62×51 or 7.62x54R for their general-purpose machine guns, despite the smaller combat kit, different ammunition and significantly greater weight. Despite doom and gloom, there are still some successful machine guns that manage to straddle the line between weight and ballistics.

One of these machine guns is mk48, which is based on M249, and it’s interesting because it was developed for the needs of SOCOM and meant to replace Mk43, a variant of the well-known M60. The Mk48 Mod2 was made with 6.5 mm Creedmoor caliber in mind – thanks to lower caliber, similar mass and greater initial velocity, it has superior ballistics and effective range than 7.62×51. As a result of experiences in Afghanistan, there is a clear tendency to improve the effective range of machine guns. Even though the effective range was greater than 7.62×51, it still wasn’t enough. That’s why SOCOM decided to try a new machine gun that would fulfill their requirements, using a different caliber, .388 Norma Magnum.

In 2012, General Dynamics showcased a new machine gun designated LWMMG (Lightweight Medium Machine Gun) that also used .338 Norma Magnum rounds. The latest SIG Sauer machine gun, the MG 338, seems to share some traits with it, namely the caliber and the firing mechanism, that is based on a gas-operated piston with a rotating bolt (although MG 338 uses a short-stroke piston, as opposed to LWMMGs long-stroke one). The barrel is the core of most firearms, being one of the crucial factors that affect accuracy. SIG spared no expense here: the barrel is high-quality, cold-forged and can be quickly replaced. The recoil mitigation system is proprietary and there’s not much information about it but it’s likely it uses something similar to LWMMG where shots are timed to occur when a significant part of the gun’s mechanism, including the barrel and gas system, moves forward and thus reciprocates during firing – this forces the recoil to overcome the momentum of the forward-moving components, after that it is transferred to the massive recoil compensator in the receiver. In addition, the muzzle is equipped with a large suppressor that reduces recoil even more. The suppressor is pretty heavy and made from heat resistant Inconel alloy. According to some data, the recoil is similar to weapons firing 5.56 mm rounds, but that seems highly unlikely.

The stock is foldable and the machine gun comes equipped with standard Picatinny rails, meant for mounting additional devices, alternative scopes and other quality of life improvements. Although it’s not as flexible as an assault rifle, it doesn’t really need to be. This is a highly specialized fire support weapon that doesn’t need an assault grip or an under-barrel grenade launcher. One crucial advantage over LWMMG is it’s even lower weight. MG 338 weighs under 20lbs! SIG achieved this by using lighter materials to make key elements of the weapon, like the receiver. Of course, it is belt-fed but uses a disintegrating belt, which makes it much more practical and less cumbersome than non-disintegrating alternatives.

These rounds are similar to .338 Lapua Magnum, but they have shorter and wider casings, which makes them suitable for use in shorter and lighter receivers. Even though the propellant chamber is smaller than in Lapua, Norma Magnum’s bullet is longer and has better ballistics thanks to a narrower rear part. The effective range is supposed to be 1910 yards, which is almost twice the range of 7.62×51 and 6.5 mm Creedmoor. These numbers are similar to (or even better than) 12.699 rounds, with greater accuracy. In addition to great aerodynamics, the accuracy was achieved with a lower neck angle of the casing, which improves propellant effectiveness. Thanks to its high accuracy, this weapon can be used as both a machine gun and a heavy sniper rifle, making it additionally attractive to SOCOM.

However, the biggest flaw is the relatively large round weight – almost twice the weight of 7.62×51. That’s why SOCOM initiated the development of composite material ammunition, which significantly reduced the weight from 45 to 35 g. While this still isn’t as light as 7.62×51 rounds, it’s still a significant improvement which allows soldiers to carry much more ammunition.

Another “flaw” of the weapon could be its price.
However, if any military can afford it, it’s the US Armed Forces. In addition, logistical support shouldn’t present too much of a problem for SOCOM, as they are definitely capable of supplying sufficient amounts of non-standard ammunition to special forces. What the response from the competition and even strategic opponents will be, remains to be seen, but it’s certain that SIG Sauer threw down the gauntlet with MG 338 by providing a top-quality firearm.

How to be a responsible gun owner?
10 Best Air Rifles by Safe Gun Owners team