Home » T/C Dimension: One Carbine to Rule Them All

T/C Dimension: One Carbine to Rule Them All

We can’t believe there’s a one-shot hunter who hasn’t heard of “Thompson/Center Arms Company”. Their single-shot break-action pistols and rifles Contender and Encore have become synonymous with a single-shot kill, especially because of their muzzle loader line. During the WW2, Warren Center was a specialist for several types of firearms in the US Army. After the war, he worked in Dallas, TX as a gunsmith. Disillusioned, he returned to his native Massachusetts and opened a gunsmith’s workshop.

A gifted firearms constructor, in 1954 he was offered a post in “Iver Johnson” factory. He constructed several very successful, simple and cheap revolvers. He left the company in 1959 and together with Elton Whiting started his own single-shot pistol business. His enterprise wasn’t a model for success, and since 1963, he worked as a head of construction bureau of “Harrington & Richardson”.  It was there that he perfected his single-shot pistol design, by introducing interchangeable barrels. The management of H&R did not find the whole concept much feasible, though. Like J.M. Browning, who left “Winchester” when they declined his Auto 5 design, he leaves H&R. If only they knew what the name Contender would eventually stand for, they would’ve gladly abandoned all of their products and stuck to Contender series only. In 1964, Warren Center makes first contacts with Kenneth William Thompson, and in 1965 they establish “Thompson/Center Arms Company”. The first product was a single-shot break-action pistol Contender.

It wasn’t until 1985, when they offered nine different barrels and nine calibers that Contender became widely known. It has become a deal of the decade, as now they offered a removable rifle stock, so that for a little cash, one could get an accurate single-shot carbine in nine calibers and nine interchangeable barrels. The success was yet unheard of. All possible barrel options were introduced, ranging from small bore .22 LR, over high powered rifle and shotgun calibers to black powder barrels. Those pistols used a single Center’s patented striker for both centerfire and rimfire cartridges. The success of Thompson/Center design was complete when model Encore was introduced in 1997. Basically, it was an overbuilt Contender, able to withstand the most powerful rifle calibers. The words Contender and Encore  could be used as a description of their maker’s life, Warren Center: after many trials and errors, he won his place in the world of guns, and eventually found himself among the most profound names in gunmaking business. 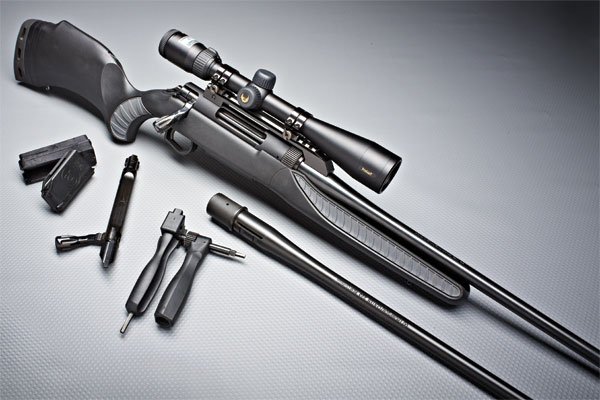 What makes a modern bolt action rifle? First, it’s the quick and simple barrel and caliber changing operation. Second, it’s the small angle of the handle when the breech is open. Third, it’s the manual cocking and de-cocking option. The adjustable trigger action would be the fourth. The modern and precise bedding between the stock and the mechanism/barrel would make the fifth condition. The T/C model Dimension meets four of these five requirements. It lacks the manual cocker/decocker.  T/C Dimension is offered in ten popular calibers, arranged into four groups marked A, B, C and D.

The stock, receiver, trigger and the scope remain the same, so once you get used to it, that’s about it. The barrel length depends on the caliber; 506 mm barrels go with .204 Rem, .223 Rem, .22-250 Rem, .243 Win, 7 mm-08 Rem, and .308 Win, while .270 Win, .30-06 S, 7 mm RM and .300 WM go with 610 mm barrels. Every barrel has a nut which connects it with the receiver. The nut has tiny vertical ribs on all over the outer side, and this is not an aesthetic detail only. The barrel changing tool has a gear with the same set of cogs like the ribs on the nut. When the tool is attached, the two gears are aligned and by turning the handle the barrel can be screwed firmly onto the receiver or easily unscrewed.

The bolt head has four locking lugs that lock directly into the barrel, arranged at 120 degrees. This enables 60 degree of bolt handle travel. The barrel centering and mounting done correctly with the same torque every time guarantees the 1 MOA accuracy for every mounted o dismounted barrel (three shots in one inch group at 100 yards every time). This is far beyond hunting requirements to say the least. The wine extractor claw is located in one of the lugs. The round spring ejector is set near the extractor claw. The bolt head has an indent so the bottom of the cartridge sits firmly protected from all sides with three steel rings. The bolt handle is long and comfortable, with vertical grooves, making the grip easy, whether for bare hand or winter gloves. The trigger action is fully adjustable, with the force of pull between 1.6 to 2.27 daN, perfectly fine for a hunting rifle.

The internal barrel profile is patented by “Thompson/Center” by the name 5R Rifling. This pattern has five grooves and lands with smooth rounded transition between those. More specifically, the middle of a land is always facing middle of the groove. The tests have shown that such barrel profile causes less bullet deformation. 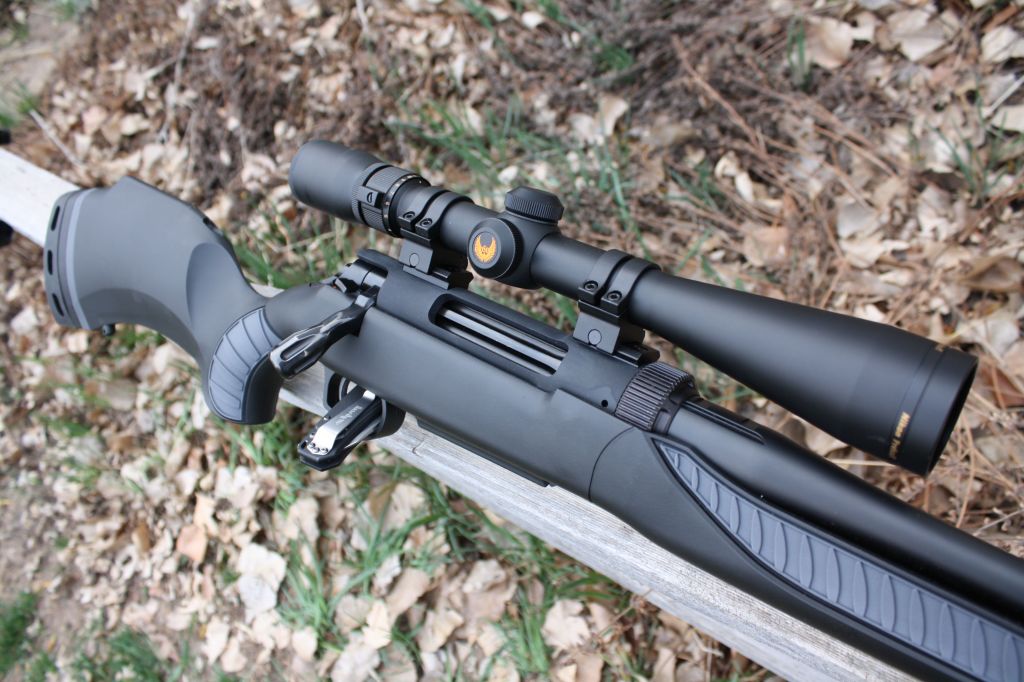 The stock has a recognizable rounded shape with the prominent cheek rest. The butt consists of an efficient shock absorber and two spacers for length adjustment. The length from the trigger can be regulated between 317 and 343 mm. The receiver is attached to the stock via rear pillar bedding, consisting of a wide aluminum shell molded into the polymer stock. The massive forward metal block houses the forward part of the receiver. The modern stock lines are not separated from ergonomic requirements. The wide ribbed rubber surfaces on both sides bear witness to that. The middle of the receiver is reserved for the magazine well, which adapts to all calibers mentioned before. The magazine capacity is always three rounds.

These rifles weigh 3.18 kg, with the overall length of 1,060 or 1,111 mm. The receiver houses two Weaver mounts, but a rail mount which attaches to the barrel is also provided. This comes handy if a hunter wants for each barrel to have its own scope setting. And every time, the manufacturer guarantees 1 MOA precision.

In the abundance of hunting rifles in the market, the model Dimension is surely an interesting purchase, especially considering its price range. T/C Dimension completes the circle started by Contender and Encore, the brainchildren of Warren Center and Kenneth William Thompson.

Mother Facing Prosecution For Her Son’s Actions
Smart Guns: Future For The police?