The raging gun control debate is primarily focused on what type of guns people should be able to legally own, and how strict the procedure for getting them should be. 3D printing technology threatens to throw another spanner in the works. With it, you could make a gun from the comfort of your own home, flouting any and all regulations you choose to.

Cody Wilson, a 25-year-old University of Texas law student, has championed the concept of printed weaponry. He founded the Defense Distributed (http://defensedistributed.com/) organization with the aim of creating a fully printable firearm.

He also created a website DEFCAD (http://defcad.org/) that hosts free, open source designs for printable gun parts. The site itself was created as a makeshift response to Makerbot Industries’ (http://www.makerbot.com/) decision to take down firearms related files uploaded at Thingiverse.

No matter what you think about gun control, whether you’re a staunch anti-gun advocate or believe that everyone should have access to as many types of weapons as they please, it difficult to argue with the notion that 3D printing will soon make gun control laws staggeringly ineffective, if not outright impossible to enforce. Wilson himself insists that “gun control for us is a fantasy,” citing the use of new technologies as the deciding factor.

With cheap or even free software you can design pretty much anything, and with good printer… you can build pretty much anything. While the low end printers are limited to plastic and have a resolution of 0.1 mm, high end, professional ones can use ceramic and even metals and can have much better resolution. Hell, Michael Guslick (aka Have Blue) has printed a “receiver” (http://en.wikipedia.org/wiki/Receiver_(firearms)) for an AR-15 (http://en.wikipedia.org/wiki/AR_15) last year, and he did it for $30 worth of materials (http://haveblue.org). The rest of the gun still had to be made from standard materials. 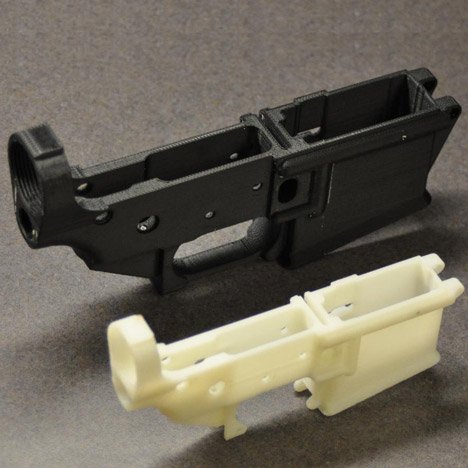 Wilson and his organization have brought to attention a relatively obscure Undetectable Firearms Act of 1988 (http://www.govtrack.us/congress/bills/100/hr4445). The law itself states that it is illegal to manufacture, import, sell, ship, deliver, possess, transfer or receive any firearm that is not detectable by walk-through metal detectors or can fool the airport x-ray machines. In effect, it bans the manufacturing or possession of a firearm that has less of an x-ray or metal detector signature than a plastic test gun containing 3.7 oz. stainless steel.

However, with functional ready to use printers costing as little as $500 and prices of high end ones dropping… with most households having at least one… just what can be done about it?  While the material requirement might threaten to put a stop to any homemade forearm printing projects you had in mind, how enforceable is it really? How will 3D printers or files themselves be regulated? Will there be firmware locks for 3D printers, will it be illegal to even share files that can be used to create firearms or their parts? If so, how will they prevent people from making their own designs and using them? It seems that any effort to prevent 3D printing of firearms is doomed to failure, even with draconian invasion of privacy and content control measures.
Images with courtesy of trending.b3dge.com, newplateaus.areavoices.com, www.dezeen.com and www.highsnobiety.com.