Sphinx of the Modern Warriors

In 2011, prototype of the new Sphinx SDP model was presented, where SDP stands for Special Duty Pistol. This year, we had an opportunity to handle Sphinx SDP Compact that is already being mass produced. During our visit to the “Enforce Tac” Exhibit we paid attention to the stand of the “Kriss Arms” company, whom Sphinx now belongs to. Besides the automatics we have already written about, we have tackled then new gun in detail.

This pistol combines the best features of CZ, combines them with some high quality solutions taken from SIG, adds some new polymer elements for good measure and joins them into, what many experts consider, the ultimate model of modern weaponry.

Real Choice for a Pro

In essence, Sphinx SDP Compact is a significantly modernized and improved Czech pistol ČZ-75, made from highest quality materials available and to high standards of Swiss military industry. The most interesting model of this gun had a “Tactical” prefix and except for 13 mm longer barrel with a threading for suppressor attachment, there are some other differences from the standard version. Slide that moves within the light alloy tipstock has guides throughout its length and it fits well in 95 mm long barrel. It is an excellent platform for an accurate shot. The magazine has a capacity of fifteen 9 mm Para bullets that, along with the length of 188 mm, height of 140 mm and mass of 780 g make this model equally suitable for equipping a uniformed unit and concealed carrying in civilian clothing. Prismatic slide has a small surface that pokes out of the frame, which maintains the grip during the cocking. This is why it has big, deep, slanted grooves that prevent slipping even when hands are wet or when wearing thick gloves. On the front part of the frame there is, already standard, Picatinny rail with four grooves, which is sufficient for even the largest models of tactical lights and laser pointers that can be found on the market. 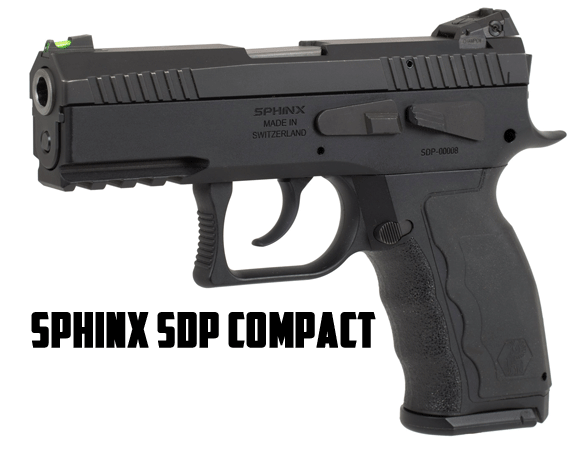 A Worthwhile Addition to the Arsenal

Two-part structure has been a characteristic of Sphinx guns ever since the 300 series, that structure allows for combining steel, titanium an aluminum alloys. SDP model’s lower part of the frame – the grip, has been made from polymers, and instead of standard two-part grips, you can choose from three sizes of grip covers, with very comfortable, adherent surface texture. That creates a supremely comfortable grip that can be adjusted for most users. On the front side of the grip there are shallow, barely noticeable finger molds (on newer models of Glock pistols those molds are much more prominent), while the rear part of the grip has a “beaver tail” that is supposed to protect the hand from injury caused by movement of the cover or the hammer. Some may not be concerned by this, but a number of users with a habit to take a “deep” grip or due to the shape of their hands, often suffer light injures made by the pinch of the hammer. For them, that addition is truly worthwhile. The grip is shaped very nicely, with a spindle-like profile, so the greatest width of 33 mm lies comfortably in the middle of the palm, while fingers, regardless of their length, nicely fit around the grip with the index finger ideally positioned on the trigger. I’m not sure how they do it, but other manufacturers could learn a thing or two from them.

The interior of the tipstock hides a soft polymer insert called shock absorber, whose role is to absorb the blow from the barrel set into the frame, and alleviate the recoil and jump of the pistol, and so help in returning back on target. Also, Teflon contact surfaces are emphasized, they eliminate the need for oiling and prevent excessive wear and tear, while all outer parts are finished with titanium-aluminum-nitride (TiAlN). It is unclear to which extent, if at all, is this method of protection better than various melonite/Teflon/cerakote or plasma/nitride finish, but it is obvious that anything with titanium or nitride in its name does extremely well on the market. The truly impressive thing however, is the firing system.

Model of the gun that was difficult to let go of, had a classic DA/SA firing and shortened hammer tail, this reduces the risk of it being tangled up in clothes when worn or being fired, but it leaves the option of manual pulling if needed. Excellent firing is not rare in the SA regime, many handguns reach the buyers from assembly lines, so the 1,300 g of force of the Sphinx was good, but not impressive. However, DA with its 3.5 kg (measured with dynamometer) provides what is probably the best double action in handguns of today. With ideally curved short step trigger and comfortable grip, it seems impossible to miss your target. Excellent mechanical sights definitely help.

All in one place

Profiled on the basis of slanted Novak ramp, rear sights has two tritium dots with white outline, while front sight, with visible optic fiber, provides excellent image on the target. The manufacturer is “Defiance”, the company whose name is also on the suppressor attached to the muzzle of the barrel. Low mass, acceptable length, with diameter that allows for use of standard sights, look like a winning combination. Simple mounting and high reliability guaranteed by the Nielsen device, that increases the recoil impulse, thus providing sufficient energy for completion of the firing cycle to the suppressor encumbered set of cover and barrel. Suppressor itself is pretty simply constructed, where the basic part consists of a set of compartments for slowing down and cooling of gunpowder gases, it is made in one piece from an alloy of aluminum. This somewhat reduces the effectiveness of the suppressor, because the internal volume is reduced, but it guarantees the alignment of all elements of the system and allows for the impact point of the suppressed gun to be adjusted by simple rotation of the suppressor. It is a very practical solution, for the direct user who does not have to fire dozens of bullets to adjust the sights, and then do it again after the suppressor is removed. Safety system is multi-layered and encompasses the block of inertial firing pin, hammer block, ambidextrous manual block and a bullet indicator, connected to the extractor so it can be both seen and felt; useful when visibility is low.

Seen as a whole, new Sphinx SDP Compact Tactical is pretty much everything you can expect from a gun, all in one place. This makes the price of 1,500 USD sound reasonable. It is more expensive than Glock but in quality it is more of than a match for SIG, and even performs better than it. Still, every pistol is as efficient as the one pulling the trigger, and the Sphinx is meant for the best.
Images by kriss-usa.com and www.sphinxarms.com.