Everything you may expect from a gun named Taurus was shown at the shooting alley. The pistol operates smoothly and as soon as you load it, you are assured that you are holding a reliable sidearm, ready for the toughest action

Taurus’ new model PT24/7G2 in 9×19 PARA presents a new, modernized and improved version of their excellent albeit over a decade old PT24/7, which was their Trojan horse to the fourth generation combat pistol market. When it appeared in 2004, the model PT24/7 was just one more “plastic shooter”, which had already begun conquering the market by then. Over time, it has proven itself as a formidable, convenient and reliable weapon, with its own character and style. That is the reason why we chose to compare the PT24/7G2 (a second generation of this concept) with the basic model, from which it was derived. This way, we should present its truly individualistic and rounded-up character.

The very first glance shows that PT24/7G2 is a really smartly designed and well-made combat pistol. All its aspects reflects the experience of the manufacturer in production of the last generation weapons. The model is carefully redesigned, with a lot of new features. The best existing solutions were kept, and some new details added. The pistol comes in a super exclusive plastic case, together with a warranty, a detailed manual and numerous warnings. The pistol itself is conceited as the basic model from which it evolved – a modern firearm with a steel slide embedded into a polymer frame, internal striker instead of the external hammer, and double stack, high capacity magazines holding up to seventeen 9×19 PARA rounds. The gun, naturally, comes with a number of safety features, which are always welcome with a weapon intended for service and use in high-risk situations. The dimensions have not been changed from the previous generation, so the full length of the PT24/7G2 is 188 mm, the maximum width is only 32.3 mm (37 with the brake lever), the height is 148 mm, and it weighs 780 g with an empty magazine. The barrel is 107 mm long, with six 1:250 left turn grooves, which is very precisely fitted into the slide, with minimal tolerance. The pistol is made in several variants, including the models with stainless steel slide, but also the one made of titanium alloy, and in three most popular combat calibers: 9mm PARA, .40S&W and .45 ACP. The version with a longer barrel and elongated slide followed shortly and was called OSS. However, what really makes this model interesting and different from the forefather of this Brazilian line is a number of changes in general design, ergonomics, and the operation itself.

The new G2, when compared with the older PT24/7, has significantly sharper and slightly more roughly designed contours. The deeply textured and straight cut slide grips foretell its sheer power and deadliness. The upper part of the slide is wide and flat, with all transitions sharply cut. This contributes to the pistol’s serious combat looks and significantly improves the control while taking aim, and loading. The transition between the barrel and the slide is almost unseen and all the surfaces are carefully and superbly finished. The slide itself is made of first grade, machined (not cast) steel, protected with a black coating known as tanifer.

Both versions of this model are based on today’s most advanced and most popular modified Browning short blowback operation, which is also known as the Sig lock (locking the rear part of the barrel into the ejection port via a block). With this, already legendary solution, the Taurus pistols have inherited reliable mechanics, despite significantly reduced overall dimensions. Both variants have ergonomically well designed and maximally reduced silhouettes, which contribute to better grip on the weapon, general control and reduced kick during the firing. Besides all that, the new G2 version is yet one step ahead.

First of all, the biggest changes are visible on the frame, cast out of polymer. No one can overlook this model’s outstanding and likeable design, with well aligned, flat and rounded contours and surfaces. The great ergonomics of the 24/7 model is additionally improved with the G2, with an almost ideal angle between the barrel and handle axes, giving it unmatched balance. In addition, the design is characterized by a number of new aesthetic details, clean lines with enlarged and aggressive handle checkering (characteristic for all models from Taurus), together with recognizable and truly original looks. The handle itself has been slightly redesigned, now featuring side indents for the thumbs, which improves the control. The improvements also include the changeable and adjustable rear part of the handle, with three different sized pads. In this way, the user can adjust the handle width to match their hand size, which is an unavoidable feature for the fourth generation pistols. 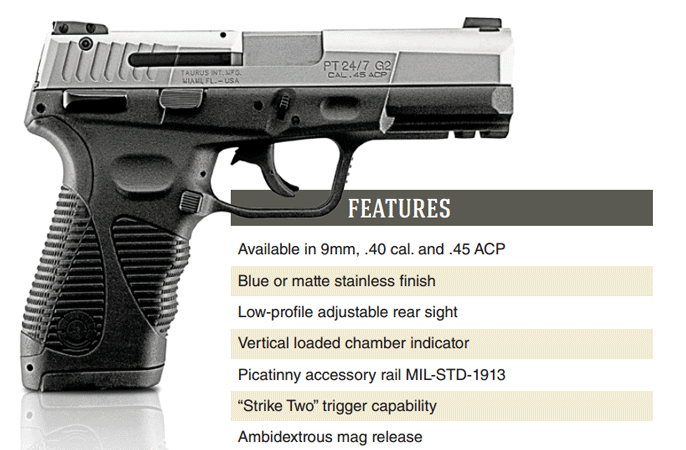 However, the most important novelties are visible on mechanical commands of the weapon. All good solutions from 24/7 and 800 line models were kept, while some of the systems were borrowed from other manufacturers (which isn’t unusual nowadays, and yet it contributes to the overall quality).

The magazine button is ambidextrous and easily accessible, but it is almost impossible to actuate it by chance. The slide stop is also ambidextrous and convenient, which is of great importance for left-handed users. There are several safety mechanisms. The primary safety is internal, automatic – a safety block laid over the firing pin, which is raised by a separate lever only when the trigger is fully actuated. There is also the trigger, which is cut through the middle to accommodate a safety lever which prevents from accidental actuation (a solution borrowed from Glock).

This pistol has also got a proven, external, manual, Colt-type safety, which has several functions. The same lever, lowered to the end serves as the decocker, which releases the cocked striker. Fully raised, it serves as a manual safety, blocking the sear. In the middle, neutral position, the gun is ready to fire. This solution covers a wide range of users, who can use the same model depending on their gun safety habits. The other details include the cocking indicator, which is basically a red-pointed stud which protrudes from the rear surface of the slide when the gun is cocked. There is also the loaded chamber indicator – a small plate on the upper side of the slide, adjacent to the chamber, also highlighted in red. There is also an integral lock, for locking the weapon, embedded into right side of the slide, which is a trademark of this manufacturer.

Although it fires by striker, the G2 has an excellent, classic, DA/SA firing mode, with the force of about 2.600 daN in SA mode, and about 6.800 daN in DA mode. The trigger pull travel is only 10 mm, very uniform and smooth, one of the best in this category of pistols.

This model, as well as the previous one, has a Picatinny rail on the lower side which is meant for various light sources, laserpoints and other attachments. The iron sights are outstanding, low, combat ready. Novak-type with glowing white tritium inserts. The rear sight is triangle-shaped, with deeply cleft aiming channel. They are mounted via dovetail and fixed with a screw. They are fully adjustable for windage. We tested the model PT 24/ G2 at the shooting alley. This is where all the effort and rich experience of Taurus has shown its real face. This full- blooded fourth generation pistol operates smoothly and with almost unmatched reliability. As it perfectly sits in the shooter’s hand, it breathes self-confidence and familiarity, which is not always the case with other models. Simply, once you have loaded it, you become assured that you are well armed and ready for whatever comes by. The magazines of the G2 have two rows of cuts in the back, with indicators for every round to the bottom (as in Glock), which is the best solution possible and at the same time another novelty in this manufacturer’s designs. Loading magazines and changing comes smooth and fast, as it should be in the top-class pistol. Loading the bullet into the chamber  is equally smooth, and the slide operates perfectly during the firing.

The accuracy is within the expectations, with usual groups of 45 to 65 mm at 25 m. Some other ammunition types may produce much smaller groups, so the gun should be regarded as a respectable combat and self-defense weapon, designed by the highest tactical standards of today. We emptied the magazine as quickly as possible, using the two following shots technique and got a 10 cm scatter at 15 m, which proves that the weapon operates smoothly, precisely, accurately and fast, just as we wanted. Having in mind the reputation of Taurus, not a single objection can be attributed to this pistol regarding its operation and control. Despite the testing conditions, its reliability is proven, as it is with almost every previous model.

All of its features – well known and proven firing, big capacity, almost ideal handle and perfect balance, outstanding aiming scheme, rugged steel magazines with plastic lid on the bottom (profiled into the handle shape), combined with the remarkable control, make this pistol a weapon of choice. The only possible objection might be that it is stuffed with, for some users unnecessary, details such are the three safety mechanisms and various colorful indicators, which are there to satisfy even the most demanding users. This is, above all, a great and powerful combat pistol, among the top of the line. The overall quality is top notch. There are almost no tolerances between the slide and the frame, and the operation is flawless.

All these characteristics we have mentioned make the PT 24/7 G2 a serious counterpart to all combat models out there, and secure it a bright future. For those who want a less costly model, there is also the basic PT 24/7, which is a great choice nonetheless.
Images with courtesy of voices-of-iowa.blogspot.com, tecmagex.com, www.austriaarms.com and www.wholesalehunter.com.