Home » FN SCAR: This is my Rifle this is my Gun…

FN SCAR: This is my Rifle this is my Gun…

For the last two decades the US Army has been rearming its special forces units and some of those new weapons even made it into the infantry corps. Although some blamed the Army command for being weapon-chauvinistic, the fact that our troops use Belgian FN machine guns in Iraq and Afghanistan is enough to dismiss those accusations. Even the legendary and patriotic AR-15 concept is being replaced with a variety of German G36. What is more, no one was surprised when some fighting units started equipping themselves with H&K 416 and FN SCAR assault rifles.

Unlike its predecessor the FN 2000  which was reminiscent of a Bosch powertool, the FN SCAR looks like a rifle at first glance. It may sound irrelevant but the centuries of small arms warfare have shown that a soldier puts more trust in a badass looking weapon than in an awkward one. That aside, the SCAR is a well made rifle, featuring state of the art materials and matching the requirements of a true combat rifle.

The engineers have smartly calculated which parts of the rifle can be made of aluminum and which of the synthetic materials. All the operating parts are made of quality and resilient steel. The two basic  variants are the lightweight SCAR-L chambered for 5.56 mm NATO and the more rugged SCAR-H in 7.62×51 mm NATO. The important feature is that both rifles have about 90% interchangeable parts, which has more than one benefit: the troops are used to one set of ergonomic features, the repair is easier, and the subvariety of these two basic platforms can be deployed as designated marksman rifles (DMR) or squad automatic weapons (SAW). There are several variants of both L and H platforms with different barrel lengths and weights and a plethora of accessories. 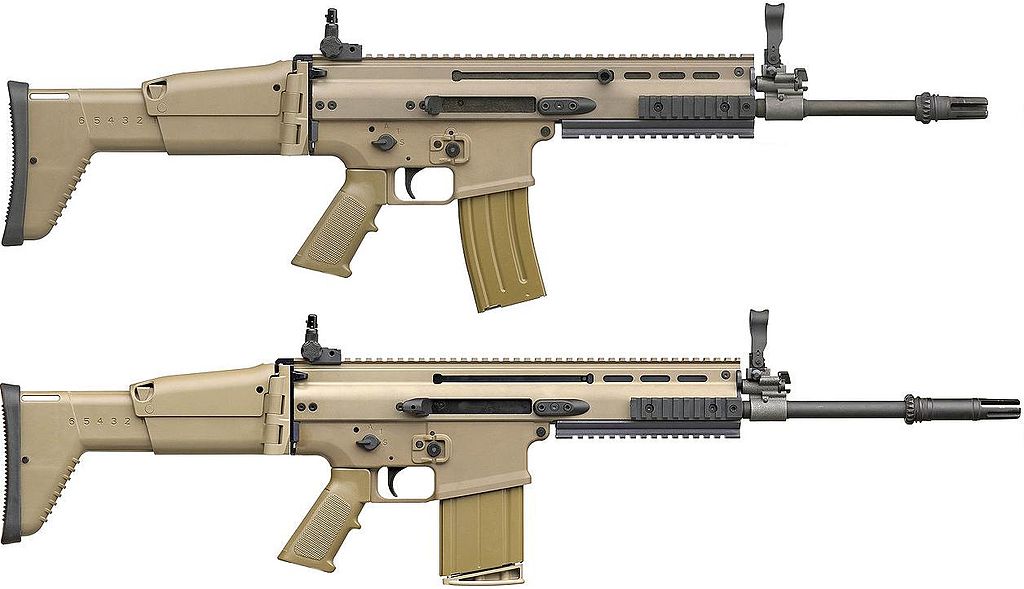 The 5.56 mm SCAR feels much lighter than 3.5 kg, what it says on the box. Thanks to the excellent balance and centers of mass, even an exhausted combatant could easily and quickly manipulate the rifle – a feature much praised on AR-15. The field stripping brings more pleasant surprises. Although it looks unnecessarily big and unwieldy, the stock is one of the best there is. It’s fully adjustable for the height and length, the rubber buttplate is outstanding, and the cheek rest can be adjusted to fit the aiming accessory attached.

The FN SCAR pistol grip is identical to the one on M16, which is slowly becoming a standard even for weapons outside the assault rifle family. The lower part of the receiver is made of polymer while the upper part is Dural. There are no small bits and pieces that can be lost or jammed. The magazine well on the both rifles can be adapted to either 5.56 or 7.62 STANAG magazines. The constructors have foreseen that a variant of the SCAR could be adapted for the 7.62×39 M43 ammunition and AK47 magazines. In that case, by changing the barrel, adjusting the magazine well and the amount of gases operating the bolt, these modular rifles could use “captured” ammunition in the remote regions out of the reach of supply lines and logistic bases. 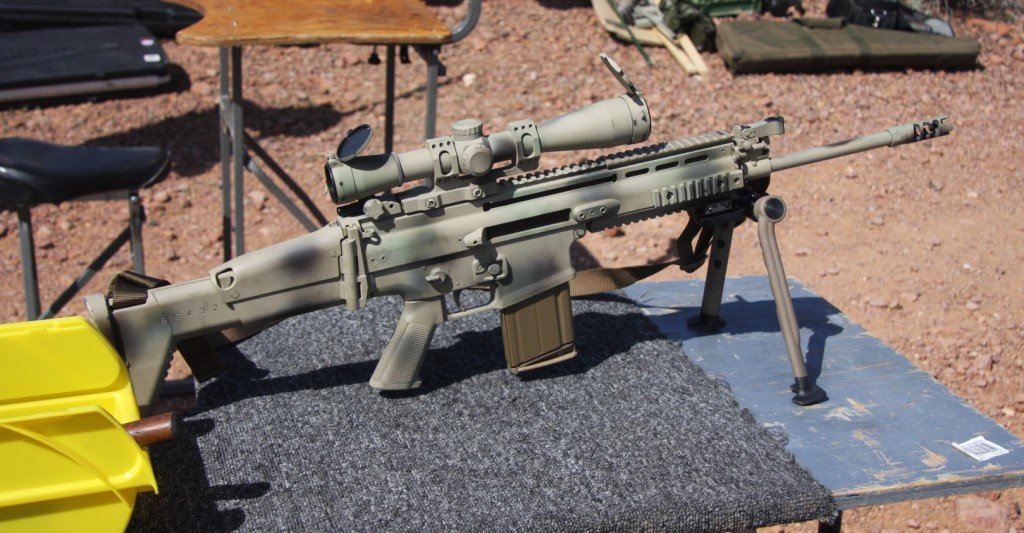 The rifle uses short-stroke gas piston principle. This enables for the straight line weapon configuration but also the higher accuracy. The FN SCAR features the best possible sighting system. The long Picatinny rail extending over the whole top surface of the rifle points to the wide range of accessories and aiming devices. By analyzing numerous experiences of soldiers who survived serious firefights during the last decade it was concluded that a reflex sight is the ultimate option at ranges within 200 meters. As the majority of infantry skirmishes take place at lesser ranges, for all engagements over 200 m it is more advisable to use some of the support weapons. However, a serious combat rifle needs to have iron sights as well, because those fancy specs may break or even detach in the heat of battle. The guys in Fabrique National have chosen one of the best peep sights we’ve ever seen. The rear sight unit is tall, almost FG42-tall. It’s fully adjustable and features two size apertures for different light conditions. The front sight is a standard post protected with a round hood. It doesn’t  get any better than that. 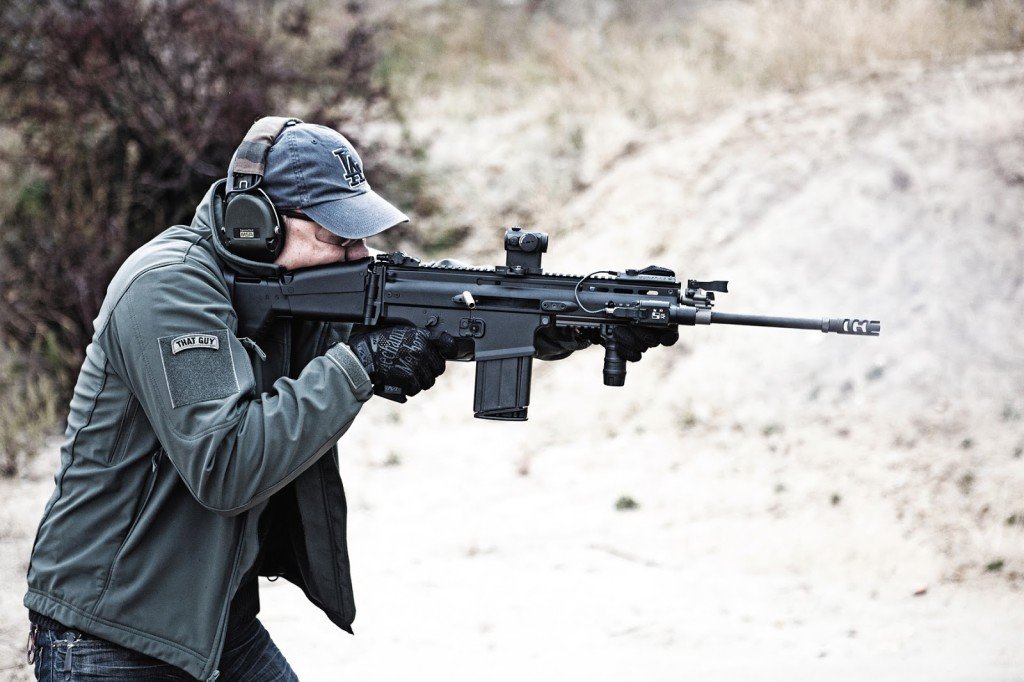 The only possible drawback of this exceptional assault rifle are the bottom and side Picatinny rails. Although useful for attaching a range of tactical flashlights, visible laser sights, IR illuminators, grenade launchers and bipods, those rails are not comfortable at all when firing for a longer period. Still the factory offers the vertical forward grips and sets of polymer plates for easier and more comfortable grip.

The FN SCAR is a modern weapon with a smart design, more useful and better made than its predecessors, FN2000 and FN FNC. With a number of modifications and varieties its combat potential is great, and it made it a weapon of choice for several special forces units worldwide. It would be pointless to compare it to M16 and AK47 rifle families as this is not a mass produced army issue weapon. This is a tool for professionals, elite units with special training and tactics. The basic platform could also be simplified and adapted for the mass production and used for rearming the complete fighting force.