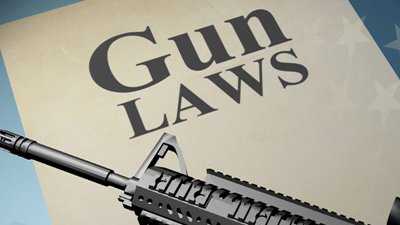 AB 1014 will allow family members to obtain a restraining order temporarily barring gun ownership for a relative they believe to be at risk of committing an act of violence.

SB 199 will expand existing law to require realistic looking airsoft guns to have special features to distinguish them as toys.

SB 707 will prohibit guns on campus, expanding the existing Gun Free School Zone Act of 1995 to include conceal and carry permit holders.

A local gun store and shooting range owner said while these new laws won’t affect the average gun owner much.

Chris Gillespie of Markley’s Gun Store and Shooting Range said: “What we can and cannot buy is shrinking every month. “Our approved roster of handguns used to be over 1,400 different models. Now we’re down to less than 800 models. A lot of the new models and manufacturers are coming out with newer guns, more advanced tech, safer guns in a lot of cases, but the way our laws are written in this state we can’t have them.”

Despite what he said, there are more customers in a recent few months.

“As lawmakers and politicians talk about proposed regulations or their thoughts on different regulations, the public reacts,” Gillespie told.

Each of the three new gun laws was spurred by deadly incidents in California and the gun control debate is sure to continue. Lt. Governor Gavin Newsom also proposed a 2016 gun control ballot initiative, which includes background checks for ammunition purchases as well as a ban on high-capacity magazines.

FAMARS Shotguns: Style of the Old Country
The Importance of Gun Care and Maintenance