The legendary BAR hunting rifle was made by a son of a famous constructor John Moses Browning. Many years later, the same company reversed the process and made a unique tactical sniper weapon, based on the old design.

In 2008, the American branch of the famous Belgian arms company FN Herstal S.A. Belgium, known within the States as FNH USA, came up with an excellent, albeit unusual, tactical sniper rifle called FNAR .308.  For decades, this company has been one of the largest small arms suppliers for US Army and civilian market alike. Their last model, although designed especially for the needs of law enforcement units and SWAT teams, originated from a well known and prized hunting rifle, which has been one of the best selling and most reliable rifles ever – the BAR.

Over the years, it was common that the military industry offers demilitarized versions of the successful combat models. The new FNAR was designed by a reversed process – from the legendary Browning BAR hunting rifle, which was born in 1967 and has remained one of the most popular hunting weapons ever. Designed by Val Browning (a son of the famous John Moses Browning), the FNAR is a simple, gas-operated, semi-automatic weapon. Short-stroke piston is set within the handguard. This rifle which houses the seven-lugged rotating bolt has nothing in common with the Browning BAR M1918, which was deployed by the US troops in both world wars and in Korea. The new tactical rifle, as well as the original hunting model is fed by double stack box magazines. The capacity of the hunting rifle magazines is three or five rounds, depending on the caliber. In accordance with the high production quality of these rifles, the loading and fixing the magazine runs easy and smoothly.

The basic Browning BAR hunting model has seen numerous modifications and adaptations, including several attempts of the private companies to make it a standard issue sniper rifle. The latest modification, designated FNAR, is different from the earlier attempts by the fact that it was done by its actual manufacturer. They have kept almost all the parts of the original design and upgraded it with the state of the art components, which contributed to its greater accuracy, but also improved the all-around reliability. The latter was necessary in order to satisfy the requirements of a sniper role.

The FNAR exists in several versions, with different barrel lengths and different stock types. Regardless of the different configurations and equipment, all FNARs have one thing in common – the manufacturer guaranteed 1 MOA accuracy, the top quality of the parts, smooth and reliable operation, and the staggering 1850 dollars price.

The basic version, marked “H” is the full size model (“H” stands for heavy barrel) in 7.62×51 NATO/.308 Winchester. It has the longest barrel and comes with the most equipment. The model “H” is intended for the sniper role in urban environments at the distances up to 600 m, where besides the accuracy, the time needed for the second shot is also of great importance. The semi-automatic operation enables for the quick second hit or taking down several possible threats. Having that in mind, the designers paid the special attention to the barrel. The barrel is thick, cold forged, match grade and free-floating, with no iron sights installed. The barrel is fluted for reduction of total mass and the interior is chrome plated. The barrel is gauged for 7.62×51 NATO/.308 Winchester and is 508 mm long, with four 1:12 grooves, and specially designed muzzle which is recessed in order to prevent damage during rough handling. The bolt locks directly into the breach, which allows for aircraft-grade aluminum alloy receiver,  without risk of reduced durability. A one-piece MIL-STD 1913 Picatinny rail for the telescopic sight is installed on the top of the receiver. The additional three rails are installed on the handguard and are intended for other tactical attachments. The gas operation on this model is just an improved one, copied from the last hunting model known as Long Track. The forward end of the handguard is slightly different and slanted.

The other modifications include the safety commands, variety of magazines and fully adjustable stock with the separate pistol grip. Although the “cross bolt” safety on the trigger guard has remained the same, its button is enlarged and raised, for the ease of access. The lever for releasing the bolt from the rear position is also enlarged, while the magazine release is located behind the hefty magazine well. The mag release can be reached with a right hand forefinger, without changing the grip (similar to the M-16). It is truly the best possible solution, which enables fast and natural response. These modifications, combined with top class manufacture, reliable operation and unique militarized look make the FNAR a ubiquitous sniper weapon for short to medium distances. The rifle easily adapts to every tactical situation  and the development costs were close to non-existing.

The rifle is equipped with an excellent, fully adjustable, fiberglass reinforced stock. The cheek rest is vertically adjustable, and the stock length is regulated by using three different attachments with recoil pads. The surface of the stock, pistol grip and the handguard are checkered in order to improve the weapon handling. 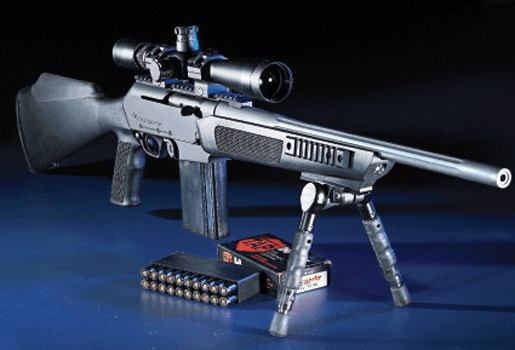 The FNAR comes with steel box magazines holding 5, 10 or 20 rounds. They are made of stamped sheets, with finely polished and profiled followers, which reduce the friction and contribute to the general reliability. Many other characteristics show that, despite the old design, the FNAR is a modern sniper rifle. Besides the full adjustability, perfect reliability and superb final control, this rifle has a great balance, set a bit forward, which is important for steady aiming and allows for quick target change. The trigger action is single stage, with a short trigger travel and the weight of around 1,800 daN. This solution is by no means the best there is, but quite decent, once you get used to it. The reason may be found in the European users, which are not used to the American safety standards.

As a conclusion, this outstanding, fast and well made classic rifle, with an archaic design and somewhat “ friendly” look can perform as well as the top notch  “badass looking” military tactical weapons of the same class. The beauty is in the eye of the beholder.
Images with courtesy of www.gunbroker.com, thegunhouse.com and www.tactical-life.com.