SW99C: The Snake in the Grass

No tremor is an isolated incident. One tremor provokes the next one, and so on, like the domino effect. And they usually affect the biggest most. Tremors in the weapons industry are evident. The laws are getting stricter, with the shadow of global terrorism helping them along the way. The manufacturers of handguns are fighting for every customer. Until recently the civilian market was overtly neglected. And why shouldn’t it be when thousands of units were being sold to armies and law enforcement agencies. That trend is changed and now the game has new rules.

This was a cheerless but realistic introduction for the story of how two legendary gun companies joined together and fought the competition. The American Smith & Wesson and the German Walther have more than a century long participation in all conflicts up to date. But that tradition was not putting the meat on the table.

Smith & Wesson  holds fiercely their share of the revolver market. And despite all of the competition, most of us when looking for a revolver turn to a Smith. Now, when it comes to pistols, there are some new kids on on the block. Glocks, SIGs, Vectors, IMIs. The older boys can only try to slow them down together, since they can’t stop them. 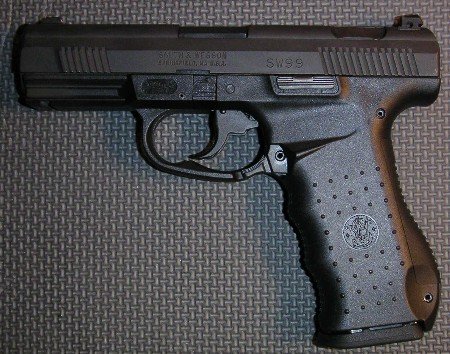 The S&W and Walther have been cooperating for some time. The  SW99, a modern polymer frame pistol was presented in 1999 as the brainchild of Smith and Walther. The natural turn of events was the birth of the compact model SW99C. This is a story about that gun.

Its polymer frame and the firing mechanism is Walther’s work, while the barrel and the slide are made by Smith & Wesson in Springfield, MS. The SW99C was planned for two calibers, the 9×19 and .40 S&W, just like the basic SW99.

The 89 mm barrel is threaded in the traditional fashion, i.e. it has grooves and lands, as opposed to the modern polygonal rifling of Glock. The key people in S&W and Walther imagined this pistol as a direct counterpart to the Glock models 26 and 27. The SW99C is 168 mm long, which is 8 mm longer than the Glock, while its weight is 652 g. The Glock 26 weighs 560 g. The both guns chambered for 9×19 have 10 rounds magazine capacity, but the SW99C lacks the magazine extension capability, which would add two more rounds. Of course it can accommodate standard high capacity SW99 magazines, which in this case protrude from the handle. The .40 S&W model has the capacity of 8+1.

The dark polymer frame has a grippy surface with grooves for two fingers holding the handle. The pinkie rests on the magazine extension which emulates the previous two curves. The spare magazine which comes with the gun doesn’t have the extension, just the flat polymer bottom. The handle shape and angle meet most shooters’ preferences so that although it’s classified as a subcompact it is very comfortable to hold.

The back part of the handle has an interchangeable palm swell attached to the frame with an elastic plastic pin. Out of the box the gun has the curved palm swell attached, and the flat one is the spare one. This system will fit all hand sizes and shapes. A part of the kit is the pin extractor, a tool necessary for changing these inserts. Nowadays, ergonomics is a big deal breaker.

The forged steel slide glides on four strong guide rails, which are molded into the polymer frame. The slide and the barrel are made of stainless steel protected with dark matte Melonite finish. The slide is curved on the upper side and it has two sets of grooves.

Both SW99 and SW99C have the same firing mechanism with an internal striker  This mechanism is the same one used on Walther P99 and has the SA/DA capabilities. The decocker is located in front of the rear sight on the left side of the slide.

With pulling the slide backwards, the round is loaded in the chamber and the internal striker is cocked. The gun is ready for the SA firing. By pressing the decocker plate, the mechanism is relaxed again. The round is in the chamber and the gun is ready for DA firing. When the striker is cocked a red pin protrudes from the back side of the slide, indicating the SA mode. This indicator can also be felt in the dark. 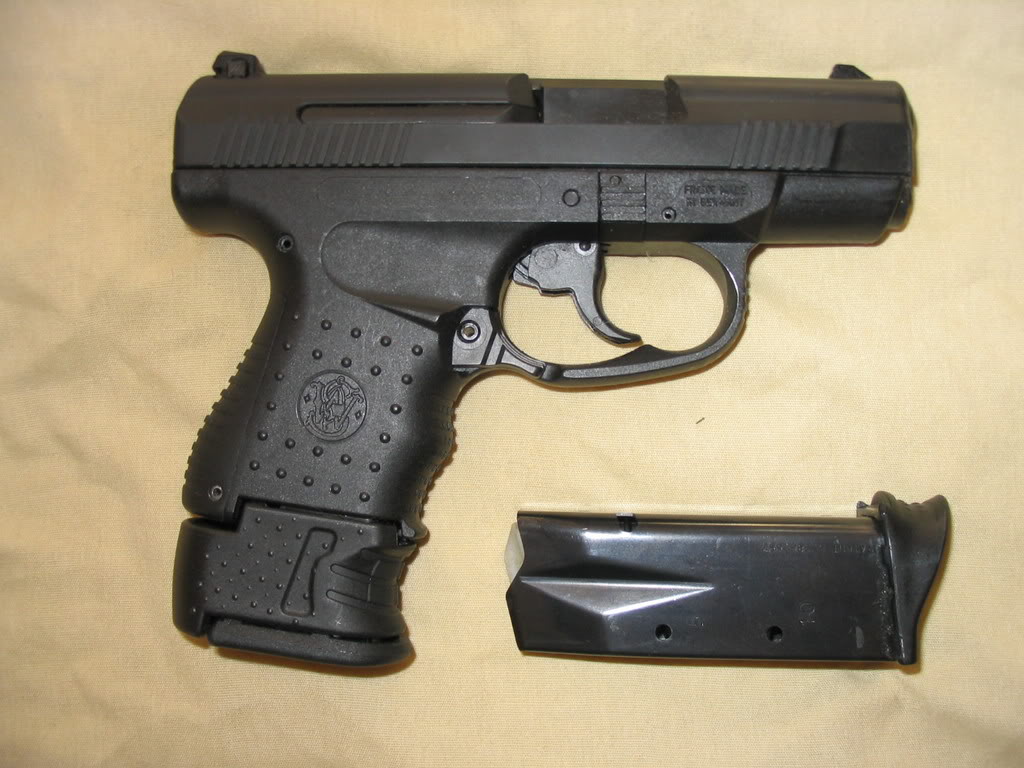 The wide ejection port and the square back part of the barrel are the locking mechanism. This lock, so called SIG-lock is the strongest pistol lock there is. The broad and long extractor is located on the right side of the slide. Such a massive extractor is rarely seen even on bigger pistols than this one. 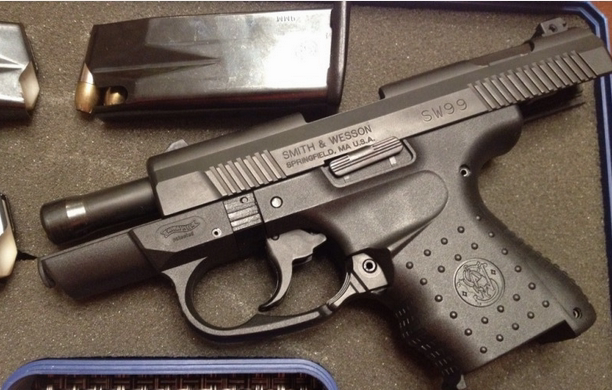 This gun doesn’t have the magazine release button. The magazine is released by actuating the ambidextrous lever on the trigger guard, just like on Walther P99. A useful tip: for a gun of this size, it’s easiest to release the magazine when the index finger is extended along the slide and the lever is pressed downwards with the middle finger. The magazines holding 10 (9×19) and 8 (.40 S&W) rounds are made of blued steel sheets with a polymer bottom.

When disassembling this gun, first the magazine is removed and slide pulled backwards. Then the trigger is pulled for control. Caution! A recent study on accidental discharge has shown that accidents involving Glocks, SW99 and the Walther P99 usually take place when inexperienced users remove the magazine and pull the trigger, not remembering to check the chamber. Bear in mind.

Once the chamber has been checked, the slide is pulled 3-4 mm backward and the ambidextrous jimped button in front of the trigger is pressed. This enables removing the slide to the front. The return spring guide is removed from the slide and then the barrel is removed. A really simple procedure.

Many authors recommend carrying these subcompacts strapped to the ankle. There is a number of ankle holsters for the SW99C. One way or another, for professionals and civilians who might be carrying the SW99 as their main weapon, we recommend getting a SW99C as the snake in the grass when the life of the innocents is at stake. 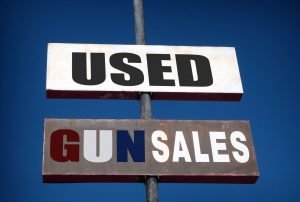