Home » Guns seized in Iowa get resold to the public

Guns seized in Iowa get resold to the public

State of Iowa has been holding on to the practice of auctioning off the weapons that the state police had seized. While this practice provides a boost to the budget of certain departments of the state, it is becoming less and less popular with some of the state’s residents, due to the fact that it makes weapons more accessible to people who might abuse them.

In 2012, this has brought $83,000 to the state. Once a weapon is no longer considered evidence it is transferred to the Iowa Division of Criminal Investigation. Some of the weapons are then given to police departments in Iowa or in other states, and remain in use by the force, handguns which don’t get distributed to police officers are destroyed, while rifles, and other weapons which could be used for hunting, are auctioned off.

The weapons that can be auctioned off are then transferred to the Iowa Department of Natural Resources, who are in charge of auctioning them off. This year, the auction will hold 20 bows and more than 500 rifles. The proceeds from the last year’s auction mostly went to the Fish and Wildlife Trust Fund, which is a part of DNR, while the remainder found its way to the general fund of the state. 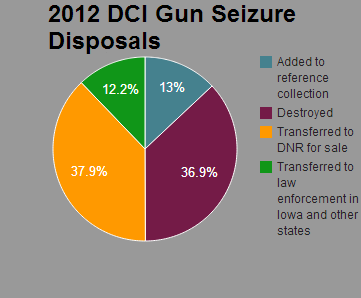 However, despite the fact that the auctions are bringing money to the state, some citizens are quite vocal with their complaints about this method of handling seized weapons. They claim that a hunting weapon is just as dangerous in the hands of a criminal as a handgun might be, and that the benefits of this kind of arrangement are heavily outweighed by its faults.

But even though the risk does exist, the auctions are carefully regulated, and the weapons are only being sold to people with proper permits, who wouldn’t have trouble buying weapons elsewhere. So far the weapons sold in this way usually didn’t find their way to the auction again, which is to say, they haven’t been used in criminal activities and seized, at least the DCI are not aware of such weapons.