Although this gun is made in Europe, the complete this year’s batch has already been reserved for the American market, where it should be available in July. According to our source from Zbrojovka, the oncoming legislation which would restrict obtaining so called “assault weapons”, has encouraged many gun enthusiasts to turn to high caliber, high capacity service pistols. This model is a part of that story.

Zbrojovka P-09 Duty is the full size version of the well-known P-07 Duty. Nowadays, all manufacturers are giving their best to offer as compact versions of their standard models as possible, while Zbrojovka has taken another path. The boosted a relatively compact pistol, making it a respectable weapon, with the looks that are spelling formidable capabilities and the ambition to take its place not only on the civilian market, but as a service weapon as well. The Kydex holster fulfills the expectations to the top. It’s designed for open carry, with the surface that imitates carbon fiber. It’s intended for safe carrying, with the backstrap, which prevents unauthorized pulling out, but enables the owner to draw in one swift pull, pressing the safety lever with the thumb. This feature makes the whole system great for patrolling officers. 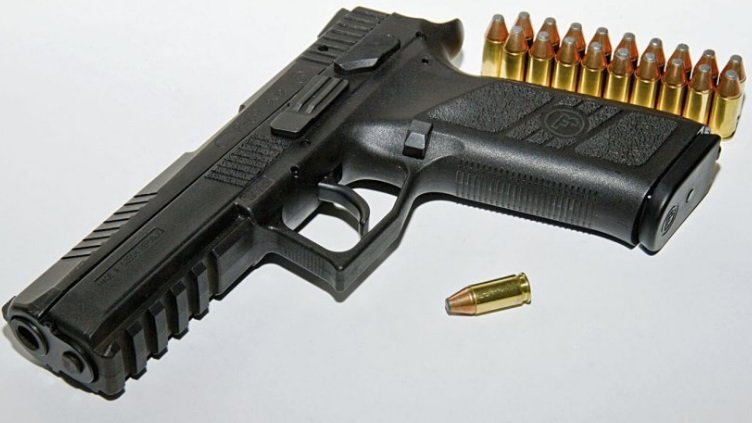 The concept of Zbrojovka P-09 Duty line is closest to the CZ-75B series, with additional firing pin blocking, which acts a s a passive safety feature. The new P-09 Duty is one step forward in the evolution of service pistols, which relay heavily on the tested and proven solutions. With that on mind, the slide is moving within the polymer frame, which extends alon the whole length of the slide (so called long dust cover). The lower part of the frame is molded as a Picatinny rail, with five ridges for  attaching a tactical flashlight and/or laser dot sight. They also took advantage of the new Omega DA/SA trigger mechanism. Although simplified, the new mechanism has an excellent feature – the force of pull is the same along the whole trigger travel. The subjective estimate goes between 5.5 kg in DA mode and about 2.5 kg in SA mode. The whole construction is very successful one, as the strict reliability and safety tests have shown – the gun performed flawlessly, without a single jam.

Its capacity of 19 rounds of 9 mm PARA increases the firepower, but also the weight. The cold forged barrel is 21 mm longer than the one used in P-07 Duty, which required a longer slide, an at the same time the sighting line. The broad and low profile combat sights are a common feature for this type of gun, and the green tritium inserts come handy in low visibility conditions. The decocker handles are set on both sides of the frame, while the magazine release button in originally on the left, but can be changed to the right.

When you take the P-09 Duty in your hand, the first impression is that the gun sits very low and comfortably and that because of that the barrel axis is set significantly lower than the wrist, giving it much more control during firing. The raised trigger guard, extended beaver tail which protects the hand from the striker, great balance and the handle with a lot of real estate, make for the secure grip and incredible feel. The frame features ribbed surfaces which act as a thumb rest. With each pistol, besides a spare magazine, the manufacturer delivers three interchangeable inserts which are attached on the back side of the handle. This solution helps users find a perfect combination and comfort. The manufacturer suggests, however, shooting several magazines with each of the inserts, and then to decide.

All these exceptional features make the P-09 Duty a prospective handgun for many purposes. Besides the service use, this is a great home defender, sports gun, even a hunting piece for small game. For the concealed carry, our choice is still P-07 Duty. Yet, a price of around $510 is not much for such a versatile weapon.