Polish arms industry has developed some interesting models during the last decade. This Sniper rifle, made by the Polish corporation “Bumar”, or rather, its subsidiary, Tarnów Mechanical Works.

Like any country in the Warsaw Block during mid-90s, Poland used the semiautomatic Dragunov as its mainstay sniper rifle. After joining NATO and getting involved in international missions, Polish military needed a different kind of accurate sniper rifle, compatible with the NATO standards. AleksanderLeżucha was the chief designer of this weapon. He decided to eschew the standard method of adapting existing models. Instead he started designing top-tier sniper rifle practically from scratch. He had his own vision, but he adapted to the needs of real marksmen. According to Leżucha, suggestions from Polish special forces unit GROM (Thunder) were invaluable. They had opportunities to test weapon performance in their many tours as a part of international armed forces, from hot sands of Iraqi desert to snowy mountains in Afghanistan. This new model was shown to be one of the most accurate sniper rifles in the world. During the 2000-2004 period, a sniper rifle Wilk (Wolf) was tested, it used 12.7×99 Browning rounds. In 2005, it entered use in the armed forces with primary purpose of destroying detected and potential IEDs. During its first run, 100 rifles, equipped with Schmidt & Bender 3-12×56 PMII optics, were delivered. These rifles were designated Tor (after the element Thorium). It was quickly shown that this model also excelled at counter-sniping role at long and medium distances.

In 2008, the army received its first Bor Rifles which used 7.62×51 NATO rounds. In the same year, a model using .338 Lapua Magnum was revealed. Both of these rifles are bullpup-configuration bolt-action and magazine-fed. The trigger and the grip are placed in front of the magazine and the action. This significantly reduces weapon length as there is no “wasted” space in the buttstock.

The Bor Rifle looks very impressive, its yellow-brown hull is made from eloxated aluminum alloy. Without optics and ammunition, it rifle weighs 6.1 and 6.5 kg (for 7.62 NATO and .338 LM versions respectively). This includes sturdy and well-made bipod fitted to the fore end of the rifle. It also has a folding monopod behind the magazine which can be used to support the rife in firing position for an extended period of time. The buttstock is fully adjustable in all directions and cheek riser is comfortable. The buttstock can be removed with just one lever so the bolt can be removed and the rifle can be disassembled for cleaning purposes very quickly. The finish is excellent, the bolt moves quickly and silently in a 60° arc. Magazine hold 10 bullets and can be easily replaced even when lying down. The trigger mechanism is also fully adjustable, as it was taken from a competition rifle.

Barrels themselves have been taken from the “Lothar Walter” company’s match series. The precision of workmanship and its quality are beyond doubt. They have six grooves with an unusually large twist rate of 305 mm (1:12) for both calibers. Accuracy at ranges beyond 700m requires maximum of 254mm (1:10) while the requirements for the .338 LM are even more stringent. Barrel diameter gently narrows towards the muzzle, while the outer side has six relatively shallow crenellations, that can’t really make the barrel much lighter or increase its surface to make cooling more efficient; they’re mainly there for stylistic reasons. The muzzle is threaded and allows installation of a silencer or three-chambered gas break. The gas break should be able to reduce recoil with .338 LM rounds by 42%.

Bor Model has two available barrel lengths. 560 and 660 mm, meaning the total rifle length varies from 938 to 1,038 mm. That means this sniper rifle is comparable or even shorter than standard assault rifle. Increase in barrel length led to somewhat higher initial velocity of the standard sniper ammo in .62×51 caliber (880 m/s), increasing the effective rage to just over 900m. The manufacturer guarantees accuracy in the 0.5 MOA. According to some factory marksmen, shot groups at 100 m have 20 mm diameter, an excellent result. Picatinny rail allows for mounting of optical sights at the top of the hull. Leupold 4.5-15×50 ER (from the Mark 4 series) is the standard army solution for this rifle, while the police and special units make use of Schmidt & Bender, especially with the .338 LM variant. 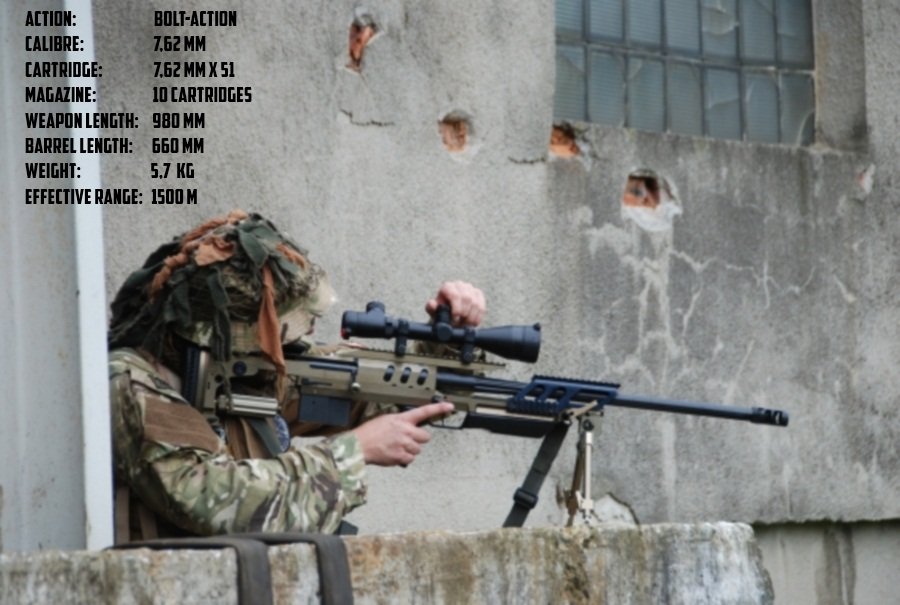 The 7.62 NATO model can use an optoelectronic day-night arming sights Bazalt model CKW. It has a variable magnification with field of vision ranging from 2 to 9 degrees during both night and day. Also it has a temperature range from -40 to +50 °C. It has low power requirements and is waterproof. This device still has some technical problems that affect its reliability, so it’s not part of the standard kit yet.

Bor sniper rifle may not be the lightest in its class, but thanks to its bullpup design, the weight distribution and balance allow it to be easily aimed from the standing position. The weapon functions smoothly and is very robust which gives it good mechanical resistance. Its specified firing speed is up to 15 rounds per minute, an impressive score for a repeating sniper rifle. Allegedly, the British soldiers in Afghanistan, have rated this rifle as better than their own model Accuracy International. Even its list price of 4,800 USD (3,500 € in Europe) doesn’t seem too high for a sniper rifle with these characteristics. The difficulty however, is that it is almost impossible to buy it. The production is very slow, because some final phase procedures are done manually. The Polish army is scheduled to receive their next batch soon, they won’t be disappointed.