Home » Kriss Super V Vector: The Return of the SMG

Kriss Super V Vector: The Return of the SMG

When the strange looking Kriss Super V Vector submachine gun appeared, its maker the “Transformational Defense Industries“ from Wyoming, USA latter known as KRISS USA was a completely unknown company. Only a few years later, the KRISS USA presented itself on the IWA 2011 international gun show as the owner of the famous Swiss “Sphinx“ company. The only suspect for such a fast growth in the time of the global economic crisis is the Kriss Super V Vector submachine gun. The name Kriss comes from the traditional Malayan knife with a smooth zigzag blade, a unique and deadly weapon.

For decades, the full-blooded assault rifles and the PDWs (personal defense weapons) have dominated the world small arms market. The sole idea of developing a new submachine design based on a pistol caliber has been looked upon as the bad investment. However, this concept has a few advantages over the assault rifles and PDWs firing new ultra-light, high-velocity rounds. The first one is that they use pistol ammunition, which is cheap and already widely available in the storage of all the armies of the world. What is more, the submachine guns provide great firepower at short distances; they are simple for training, and easy to use.

The technology of stamped sheets and polymers in their production makes them light, quick and easy to maintain. Because of all these characteristics, the submachine guns are interesting to the developing countries as well as the best equipped armies of the world. On the other hand, despite their shortcomings, the short-barreled commando versions of the assault rifles have narrowed the use of submachine guns as the weapons for the police agencies, security services and Special Forces. The new submachine gun integrates the small size, small weight, an excellent control in full-auto and the wide array of optional attachments. It’s no wonder it has drawn so much attention.

For the new submachine gun, the designers have chosen the old and reliable .45 ACP, which has excellent stopping power, even with the first hit. Despite of the heavy ammunition, its break-through construction provides much better control in full-auto, as well as easier one-handed use. In order to achieve that, several new solutions have been developed.

It operates on the delayed blowback principle. Upon the discharge, the bolt travels backwards, just enough to eliminate the recoil and the kick. As it moves along the curved grove, the slider compresses the main spring, which dampens the recoil even more. The result is a much gentler kick to the shoulder, weaker recoil, and more shots on the target, altogether with a lesser fatigue of the shooter, which usually comes after “wrestling“ with the gun while firing heavy rounds in full-auto. The barrel itself is set unusually low, almost in the level with the trigger finger, which also improves the control. This solution is more common on sport weapons, and dramatically increases the precision, even during the quick follow-up shots.

The Kriss Super V Vector looks more like a rotary hammer drill than a deadly weapon. It is 406 mm long, and the extended stock gives additional 210 mm. The weapon is 175 mm high, has a 140 mm barrel, with the right 1:405 mm twist. The weight is 2.5 kg without the ammunition, which is getting near the modern assault rifles. The two-piece receiver is made of highly durable glass-reinforced polymer. The field-stripping is quite simple, and it takes only ten seconds. It’s enough to pull out two pins for the field maintenance similar to the H&K MP5, while the complete disassembly requires taking out two more. The weapon can be disassembled into three parts, which enables the thorough cleaning. The first models used 13-round Glock 21 magazines. Now, there are special 30-round polymer magazines made by the renowned company “Magpul“.

Despite its strange looks, the users usually describe Kris V as a well-designed submachine gun. The center of mass is ideal, it has good ergonomics, and thanks to the rubber stock pad, it doesn’t slide or move during the quick firing at different targets. The back iron sight is a ghost ring, which is an excellent solution, as it allows the shooter to aim with both eyes open, giving the better perception of the combat situation. However, the modern submachine guns require the use of telescopic, reflex and laser sights, so the Kriss V is equipped with four Picatinny rails for various attachments. As we mentioned, the barrel is set in the level with the trigger, so the hand guard space above the barrel is used for inserting a Surefire tactical flashlight.

The folding loading handle is on the left side of the weapon and it doesn’t move during the operation. The ambidextrous fire mode selector is located in the middle of the upper half of the receiver. The modes are semi-auto, two-round burst and full-auto at 800-1000 rounds/min. The separate safety lever is also ambidextrous and located above the pistol grip. The trigger action is more than adequate for this type of weapon, and all the trigger stages work silently, with the moderate resistance. The .45 ACP rounds are subsonic, and thus ideal for silencing. The TDI has developed a special line of compact lightweight silencers for pistol calibers, called Defiance. All the Kriss V models feature a Nielsen muzzle booster, which transfers the recoil impulse onto the barrel and improves the handling in the full-auto mode.

The manufacturer claims that the Kriss V can group five shots in 2.5 cm at 25 m, from the standing position. At 100 m, (which is the maximum effective range) the group falls within 30 cm. Not even the long-barreled sport pistols have such precision. No doubt, this is one of the major selling points. Of course, the TDI has launched the civilian semi-auto version. The prices are relatively high, from $1,600 to $2,000. This weapon has no apparent advantages for the civilian users, as it is designed specifically for outstanding full-auto performance. However, the probable target group is the military enthusiasts. The manufacturer has announced the versions in other calibers as well, such as the 9 mm Para, .40 S&W, 10 mm Auto, etc. 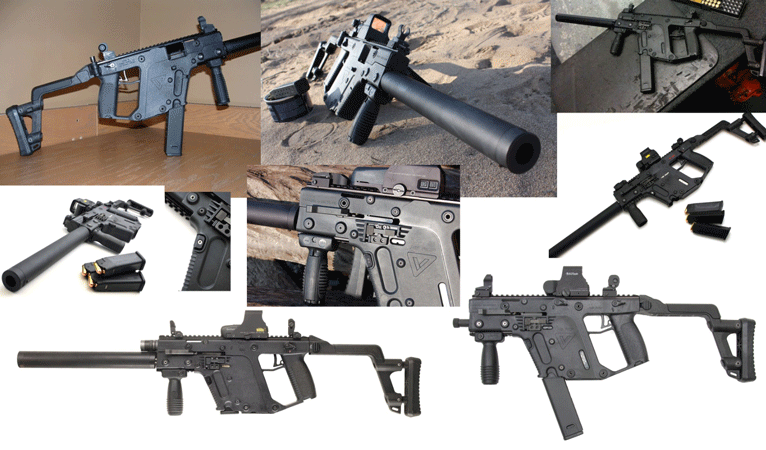 For the military users, however, the more important is the capability of the Kriss V system to adapt to all existing small arms calibers, including .223 Rem and .308. The US Army has made a deal with the TDI on the development of an experimental light machine gun, chambered for 12.5×99, which would eventually replace the ancient Browning M-2.
Images with courtesy of www.gunpundit.com, themarksman.net, noble-empire.com, and www.polycount.com.