In spite of the well-developed defense industry, primarily oriented towards small arms, Italian Armed Forces have been using a clone of M1 Garand rifle up to 1990. The BM-59 was a big, heavy battle rifle firing .308 Winchester (7.62×51 NATO) ammunition, which had already become obsolete as far as modern assault rifles are concerned. The main reason for its replacement was that rifles were virtually impossible to control in full-auto. Not many people know that “Beretta” has, in 1968, already begun developing a new assault rifle chambered in the newest caliber at the time, the .223 Remington (5.56×45), which has by then seen action in Vietnam.

This rifle, called AR-70/223 was among the first rifles that used this ammunition, besides M-16 and FN FAL, so it was met with an outstanding export success. In addition to Italian Special Forces, it was used by armed forces of Jordan, Malaysia, Indonesia, etc. At the point when all the Western world shifted completely to 5.56 ammunition, the Italians followed the pattern and started developing other designs around this fast and powerful cartridge. However, it was soon discovered that AR-70/223 had serious shortcomings. Among others, it was unable to use the standard M-16 magazine, it had weak bolt return springs, and using it with an optical sight was close to impossible. Finally, in 1985, “Beretta” started developing an improved version of the rifle, later called AR-70/90.

On the outside, when compared to AR-70/223 which looked more like a toy than a deadly weapon, AR-70/90 gives out an impression of a no-nonsense piece of gear. It uses the proven long stroke piston gas operation and a rotary bolt, similar to the one on AK-47, with two locking lugs. The construction is typical for the Cold War period – stamped steel sheets with spot welded components. This manufacturing procedure made the rifle cheaper and more suitable for mass production. 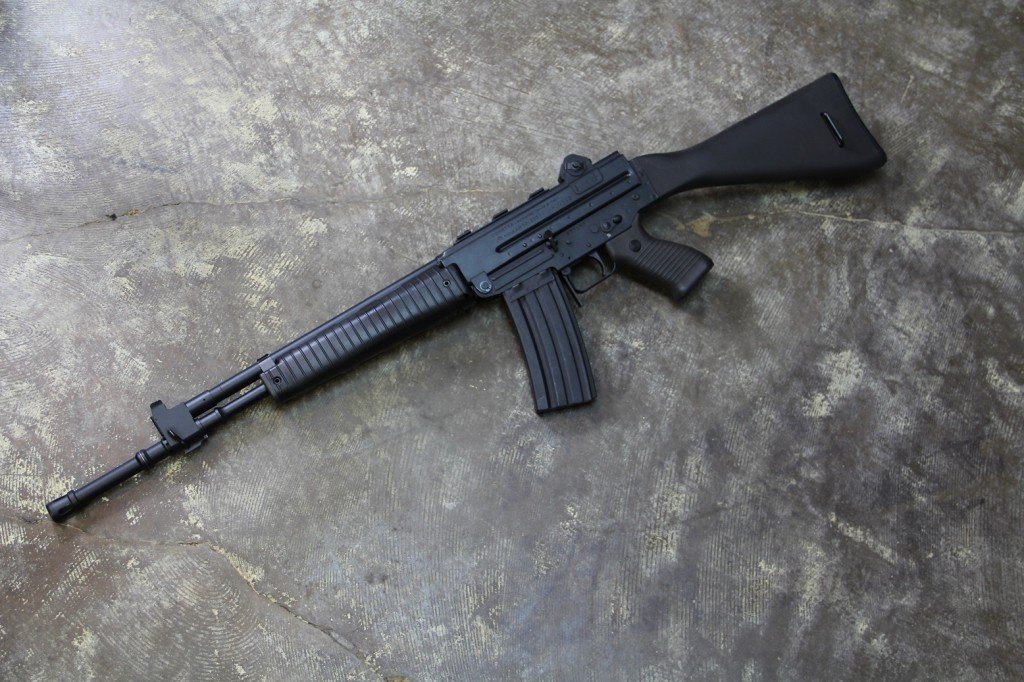 Unlike AR-70/223, which uses a rectangular receiver with a profiled steel sheer bolt guide, which used to deform in extreme conditions, leading to bolt carrier jamming, AR-70/90 uses a receiver with trapezoidal cross section, which is more durable, with sturdier guides welded onto the receiver. There is also a bolt stop feature that holds the bolt in the rear position when the last cartridge is fired, which AK-47 lacks.

All in all, AR-70/90 assault rifle is similar to the legendary AK-47 in many aspects. It has proven its quality in side by side testing with AR-70/223 and BM-59. In the end, Italian Armed Forces have adopted it as a standard issue in 1990. At the time it was a modern and promising weapon.

One specific feature of AR-70/90 is the gas regulator. Unlike with most other rifles, where the gas regulator has two positions, “on” and “off”, AR-70/90 gas regulator has one more position which enables increased gas flow, used in extremely low maintenance conditions. This feature is also used on several machine guns designs. Another unique feature of AR-70/90 is the barrel mounting system, which enables fast, field replacement of a barrel with no need for fine tuning. The barrel interior is chrome plated for increased longevity. 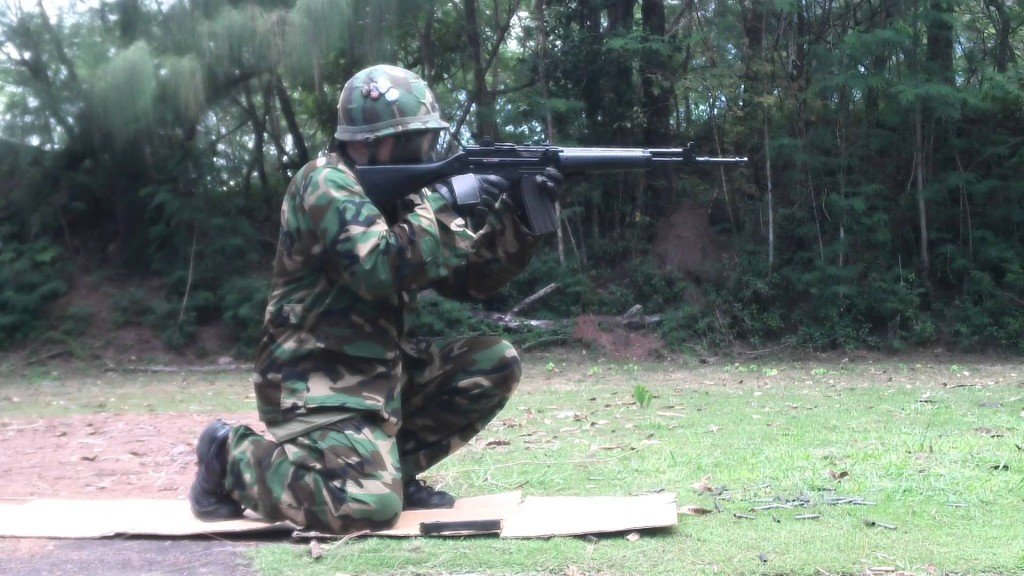 Unlike other assault rifles, which usually feature either a full-auto or three round burst mode, AR-70/90 has both options. Even though today most experts believe that a three round burst is an unnecessary complication, this only speaks for the effort that “Beretta” constructors have put into creating an ultimate assault rifle.

Aside from these two firing modes, there is a single shot and safety mode. Differently from AR-70/223 which has the fire selector on the right side only, AR-70/90 has an ambidextrous selector. The same applies to the magazine release button. The rifle uses three magazine types, with 5, 20 or 30 rounds. Visually, the trigger guard “bridges” the pistol grip and the magazine. It can be flipped down so the rifle can be used with thick winter gloves.

The iron sights are unusual but very innovative at the time when they appeared. The front adjustable sight is protected with a pair of massive side guards and is located above the gas regulator. The rear peephole sight is located at the end of the receiver and has two settings, for 250 and 400 meters. It can be adjusted for elevation and windage. The carrying handle is positioned in front of the rear sight, and its flat tops surface can be used for fast aiming in close quarter scenarios. The handle can be removed for fitting an optical device. Italian Army uses a 4x Aimpoint day sight and a passive Carl Zeiss Orion sight.

Aside from stamped steel sheets, AR-70/90 saw extensive use of polymer – the forward and pistol grip and the stock. The tubular, skeleton folding stock is used on the SC-70/90 version of the rifle. Special Forces use SCP-70/901 version, with the barrel shortened from 450 to 360 mm. In addition to rifle grenades, these rifles can be fitted with underbarrel grenade launchers, both the US M203 and Singapore CIS-40, as well as Italian Franchi GLF-40. Unlike M203 which is mounted under the forward grip, GLF-40 is mounted using two prismatic fixtures directly onto the barrel. This grenade launcher barrel doesn’t slide forward for loading, but swings to the side, so it can fire longer special purpose grenades.

Another interesting feature is the cleaning kit compartment in the hollow pistol grip. Front end of the barrel can be fitted with a bayonet and a bipod for more accurate long range fire. The rifle has further evolved into a semi-automatic hunting version AR-70/90S and a light machine gun AS-70/90, with a closed bolt operation and a 465 mm heavy barrel. Neither of these variants were particularly successful.

Although one may think that “Beretta” engineers gave their best, taking care of every detail to make an ultimate assault rifle, AR-70/90 series rifles found no other users but Italian Armed Forces. The reason for the missed opportunity is not the poor quality, but the time span in which they appeared – the 1990s, when the Cold War ended and the whole world was flooded by a torrent of AK-based rifles from the former Eastern Bloc countries. Besides, many companies were already experimenting with attractive bull-pup designs, like Steyr AUG, FAMAS, L85, and AR-70/90 looked too traditional. In the end, we should mention Italy’s relatively weak political influence, which was unable to push their defense products in the world markets.

Today, faced with counterparts like German H&K G-36 and the latest rifles with integral optics and the load of Picatinny rails, AR-70/90 has no chances for success. Still, one should not forget that “Beretta” is indeed very capable of designing a new weapon based on AR-70/90 inherently good design.