Zastava Arms from Kragujevac, Serbia has a long history of quality guns and weapons manufacturing. For the last 50 years focus of manufacturer was focused on licensed AK variants, which are amongst the most quality variables of the AK systems globally.

AK platform in its original state is now obsolete in various elements, so Zastava first introduced the M21 rifle, integrating new materials onto an old and trustworthy platform, but from data on the field (mostly foreign forces using it for private military personal armament) it was obvious that there is quite a lot of room for improvement, not only on the basis of the materials but also on the mechanism and caliber.

19 after 21 is a bit confusing in the nomenclature, but the new rifle is a real improvement in every important detail, compared with both AK47 and AK74, but also in comparison with a mentioned popular M-21 rifle.

As Cappy loves to say “everybody loves modular”. Modular is the main buzzword of armies all around the world, but in this particular case, with this multi-caliber system and benefits and problems it solves, that description is attributed properly.

Improved ballistics of 6.5 Grendel is obvious by an increase in long-range impact and improved lethality but it’s a “new” round with currently limited availability.
Keeping an option to use good ol’ and globally available (in almost unlimited quantities) 7.62×39 enables cheap training, easier logistics and an option for less rich countries to mass adopt M-19.

It’s not rainbows and unicorns with M19

Current design features have some room for additional improvement which would produce an almost perfect assault and battle rifle for a multitude of countries with budget challenges and without native small arms industry.

These are some of the potential design issues with the current design issues of M-19 Zastava, which are probably fixable before mass production and adoption. 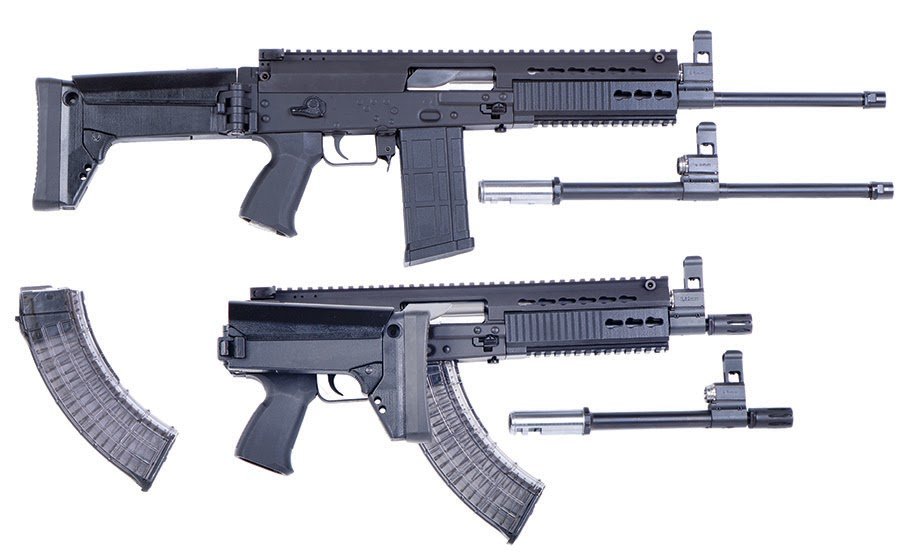 Lack of the bolt hold and release button

After the new magazine is inserted, an operator needs to use a charging handle to load a new bullet into the barrel. By adding a bolt release button that procedure would be much more streamlined, especially in lower positions, kneeling or prone. That would also add additional speed on reload and enable operators to keep their eyes on the target.

Lack of charging handle on the right side of the rifle

You can use the only centrally positioned charging handle for both hands, which is not perfect in laying positions, and also increase the learning curve with users used to the old AK bolt mechanism where the charging handle is usually operated by using the left hand in various ways.

Even with these issues, Zastava M19 is a modern assault/battle rifle designed and developed by the company with 169 years of experience in weapons manufacturing.

The rifle is adopted in the armament of the Armed Forces of the Republic of Serbia in smaller quantities, for final tests and feedback, so it is realistic that some additional changes will be requested and implemented before complete introduction in the whole force and potential commercialization and export.