Affluent hunters don’t buy their rifles in gun stores. For many of them a production rifle just won’t do, no matter how well-made it is. What they are looking for is a highly customized hunting piece. Although the demand for custom hunting weapons is on the downward slope, a handful of master gunsmiths still survive, inspiring awe with their products and innovation. One of them is the Austrian gunsmith Werner Bartolot, who despite his young age manufactures a series of outstanding rifles. Strictly guided by the customer’s requirements, he produces double rifles, O/U rifles and all drilling configurations, single-rifles, bolt-action rifles based on Mauser M-98, single and double-barrel shotguns.

Double rifles are No.1 most wanted pieces that people order with prestigious gunsmiths. Werner offers several models, including the Doppelbuchse chambered for the tropical .470 NE caliber. This powerful cartridge is used in African hunts for the “big six” – elephant, rhino, Cape buffalo, lion, leopard and the hippo. These animals are considered extremely dangerous to hunt. Two quick shots from a double rifle require not only courage but outstanding hunter’s skill. The round of.470 NE cartridge weighs 32.4 g, has the initial velocity of 655 m/s and the muzzle energy of E0=6950 J. With the rifle zeroed in 150 m, the bullet drop is 13.2 cm at 200 m. 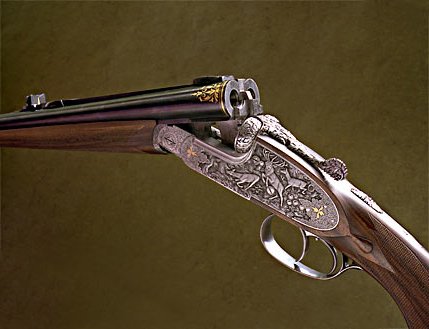 Such a powerful rifle requires top notch barrel and receiver machining. It features four folding rear sights for ranges from 50 to 200 m. The rear sight has a V-notch with a golden insert in the middle. The front sight is adjustable for elevation, and the rear sights can be adjusted for windage in a dovetail mount. The locking system is Purdey-Scott, with three locking keys. The rifle is equipped with Westley-Richards lever for breaking action. The striking and firing mechanism are located on the side plates with seven axles. This expensive H&H firing system has a safety interceptor system that catches the internal striker in all cases except then the trigger is pulled to the end. The safety slide is located in the usual place above the stock grip. The two independent triggers discharge each barrel.

This beautiful double rifle sports a German-style walnut stock, rich engraving with motifs of African hunts, bordered with fine arabesque patterns, combined with world-class finish. Besides the gargantuan .470 NE, Mr. Werner offers all possible barrel configurations, from .17 HMR to artillery-grade .700 Express. Each rifle is delivered in a luxury leather case. The price is negotiated carefully and slowly, but it always reaches several thousand euros. These African calibers have wide rims, which simplifies the installation of ejectors. In a dangerous hunt, ejectors can sometimes make the difference between life and death. 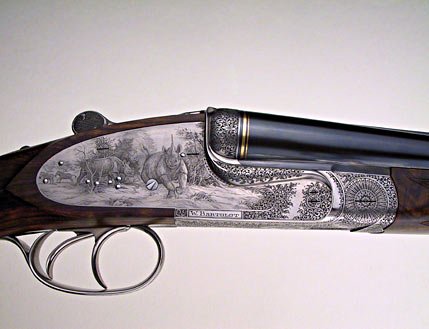 Considering the size of African game and the usual firing distances, it’s always advised to use iron sights, or 1-1.5x scopes. Professional hunters will tell you that a wounded leopard often charges the hunter, which leaves little time for searching for it in the eyepiece or reloading the rifle. Professional hunters have saved lives of many hunters in such situations.

Werner Bartolot also offers double rifles with Anson Deeley firing mechanism. In this system, breaking the barrels actuates the internal strikers. This is a very reliable and simple 150 year-old solution. Although Anson Deeley system is cheaper than H&H, this rifle is not cheap at all. The flamed receiver finish combined with tiny floral engraving will find their customer. As this double rifle is chambered in 9.3x74R, it comes natural to include scope mounts. Swarovski Z6 1-6×24 or Schmidt & Bender 1-8×24 would be a perfect choice as they allow quick aim at 10 m distances as well as hunting from a blind 150-200 maway. 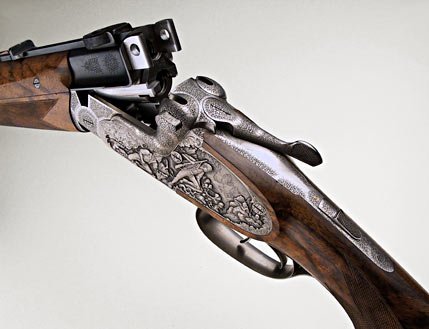 Werner Bartolot rifles are popular with long distance hunters as well. A break-action single rifle chambered in the ultra-fast 6.5-284 Norma uses the Handspanung device for manual cocking and decocking, Westley-Richards barrel action and Celtic engraving. Many European hunters prefer the purity and the fair chance of a single shot, where mistakes are unforgivable. This long range single rifle is sure to attract attention of your fellow hunters wherever it shows up. Austrian Emperor Franz Joseph, who was a passionate hunter, preferred a single shot rifle to any other. The walnut grain on this rifle stock is unbelievable. 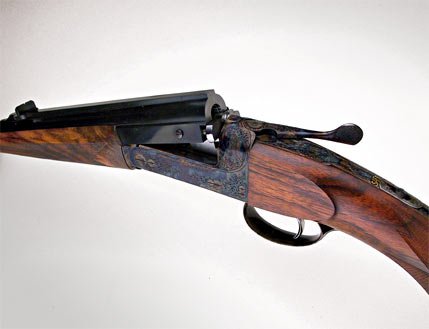 German hunting tradition has bred a special type of O/U rifle called Bergstutz. These slim and elegant rifles are favored by wealthy hunters in Germany and Austria. The lower barrel is chambered in a high-power caliber while the upper takes some of the popular moderate calibers. Werner models are offered in calibers starting from 5.6 mm for the upper and 9.3x74R for the lower barrel.

Rifles based on Mauser M98 action have always been popular with German and Austrian gunsmiths. Werner has equipped his Mauser design with a noiseless safety, fixed scope mounts and two-stage rear iron sight. The customers can choose the caliber and the barrel length. Its high price involves the flames receiver finish, blued side extractor and the state-of-the-art stock. This is another rifle that will excel in hunting the big six.

Where have all the cowboys gone: Texas House of Representatives votes on public carry
Airforce Colt