At the end of the 20th and the beginning of the 21st century, a father and a son, Erich and Walter Roesler started a family business in the Austrian town of Kufstein. They only had one permanent employee, and occasionally hired four more specialists for certain jobs. They were making hunting rifles in half-custom, half-manufacture operation. Those rifles were not simply remakes of different models, but had their own, completely original mechanism. Even though their rifles are full of expensive, hand-made parts, they are not only focused on profit, and their rifles are very reasonably priced, even despite the highest quality. This sets Titan Roesler apart from other new models which might be just as good, but cost a lot more.

Erich and Walter employed modern methods in the making of their bolt action rifles. By locking the bolt directly in the barrel, and not in the receiver they achieved easy barrel and caliber switching as well as left the option of using modern aerospace aluminum alloys for the construction of the receiver. This automatically made the weapon ultra light and suitable for both hunting in wait or active hunting which includes a lot of walking and looking for the game. This kind of dynamic hunting has been gaining in popularity lately because of its more chivalrous and challenging nature. Instead of using the Mauser 98 classical solution with locking lugs and the 90 degrees chamber opening angle, they opted for a solution including three locking zones distributed under 120 degrees angle. This enables the bolt action with just an opening angle of 60 degrees, which is a whole third shorter and enables faster action. The features of the rifle are a testament to the fact that father and son Roesler used precise cad-cam calculations. For smaller calibers, such as .222 Rem, .223 Rem, 5.6×50 Mag, .22-250, they realized that the construction will be solid enough with only three locking lugs. This was later confirmed in numerous rigorous tests. Those three locking lugs were why the rifle was named Titan 3. However, with stronger calibers, such as (6 mm Norma BR, 6 mm XC, .243 Win, .25-06 Rem, 6.5-284, 6.5×47 Lapua, 6.5×55 SE, 6.5×57, 6.5×65 RWS, 7×57, 7×64, .270 Win, 7 mm-08 Rem, 7,62×39, .308 Win, 30-06 S, .358 Win, 8×57 IS, 9.3×62, 6.5×68, 8×68 S, 7 mm RM, .270 WSM, .300 WSM, .300 Win Mag, .338 Win Mag and .375 Ruger) in order to ensure that the rifle will endure the additional strain, another row of locking lugs was added to the construction. Because of the six lugs, this model was named Titan 6. A company that small was not exactly expected to offer so many caliber options. A total of 31 calibers in one model is something that you can’t always expect even from much larger companies. This large offer only makes sense when we take into account the easy barrel switching on Titan rifles.

You can use the Allen wrench that comes with the rifle to unscrew two bolts and easily change the barrel and the caliber. You don’t have to change the bolt front. Of course, you can exchange the barrels betweens models Titan 3 and Titan 6. Seeing that the capacities of the factory cannot support the making of the barrels, Roeslers decided to get finished barrels from American Wilson Arms and German Heym. The reputations of these two companies are a guarantee of quality and their barrels complement these rifles perfectly. Standard caliber barrels are 56 cm long, while the magnum ones are 61 cm. The barrel is connected to a prismatic, carefully manufactured part, which takes some of the recoil energy and distributes it to the stock. By analyzing the offered calibers, you can easily conclude that aside from some hunting barrels, Titan 6 also comes with a purely long range or bench rest caliber. This makes the rifle quite suitable for long range shooting. We normally wouldn’t expect a rifle that costs just a bit over $1000 to offer the ability of changing barrels, which makes it both suitable for the hunting of deer and predators as well as for long range competitions. 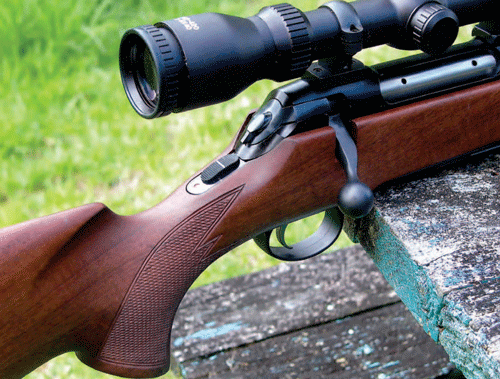 The bolt is made as one part, out of high quality steel. In case of the spray or rupture of the cap, which could be potentially dangerous, a special barrier and side openings on the bolt ensure that the hot gasses will be safely diverted away from the user. The six locking lugs on Titan 6 have a complete locking surface of 384.4 square mm, while the grip with the barrel base has 203.8 square mm. This makes this lock roughly as solid as the one on the Mauser M98. The extraction of the cases is done with the help of a 3.5 mm spring powered extractor. The receiver is made of extremely solid aerospace aluminum alloy with a cylindrical profile and perfectly polished inner grooves. This is most obvious in the smooth walk of the bolt. Both the pulling of the bolt handle and returning it into lock position are smooth and fast. Tests have been performed on the reaction time of the Titan 6 striking mechanism and have come up with a result of 1.7 milliseconds, while the famous Remington 700 needs 2.6 milliseconds.

The trigger guard is made out of dark aluminum alloy. The stock has a safety brake, reminiscent of the ones on most shotguns. It has three positions – frontal, not active, when you see the red spot, middle – makes locking and reloading possible, but not shooting the gun, and back – which makes the rifle completely safe. In the locked position the back of the bolt protrudes and is a sufficient indicator of the state of the rifle. Titan Roesler gets the ammo from box magazines holding three standard or two magnum bullets. You can also get extended clips with five standard or four magnum bullets. The magazine is released by pressing the two spring loaded magazine ejectors. 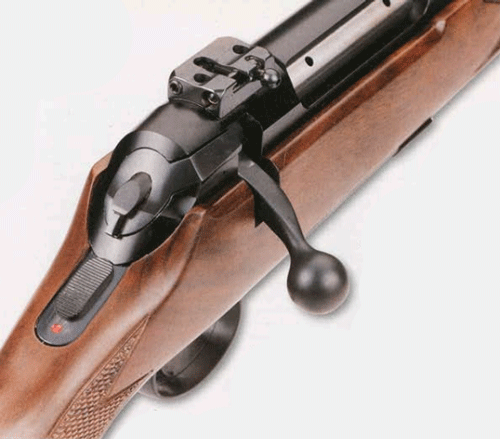 The stock is made of walnut tree, imported from Italy. Coming in various shapes, with three models intended for left-handed users. As the fashion dictates the rules, Titan Roesler adapted to the market and now offers stainless steel rifles and stock made of black polymer. The possibility of switching calibers, the barrels of 15 mm or 19 mm muzzle diameters, carbon or stainless barrel mechanism and walnut or polymer stock, has propelled Roeslers among the rifle makers which allow the buyer to create their own rifle. It is also important to note that the Titan 6 is a very light rifle (2.9 kg standard version or 3.0 kg magnum).
Image with courtesy of www.jagd-shop.at.