The company “Tikkakoski O/Y” was founded in the Finnish city of Sakara in 1893. Until the end of the First World War, they made various machines and early engines. Only in 1918, during the Winter War (1939-1949 War between Russia and Finland), “Tikka” started manufacturing guns for the Finnish army.

During the Second World War, the entire production capacity of “Tikka” factory was focused on making the famous Finnish “Suomi” submachine gun. When the war passed, “Tikka” returned to manufacturing peaceful machines, vacuum cleaners and sewing machines among them. Whenever a factory or a nation was forbidden from making weapons or found it unprofitable, it immediately turned to making sewing machines. Since manufacture of infantry weapons (rifles, submachine guns, machine guns, pistols) is very similar to manufacturing sewing machines and cash registers, at least concerning the industrial and technological capacity and requirements, Finns easily switched their production focus when the need for large amounts of Suomi machine guns increased.

Since 1965, “Tikka” was a famous manufacturer of shotguns and carbines that were exported to the US under the Ithaca brand. “Tikka” was in 1983 purchased by the much stronger Finnish company “Sako”, and they have been inseparable ever since in various weapon fairs and markets. Today they both belong to the powerful “Beretta” group. The “Tikka” central is located in the “Sako” HQ, in the city of Riihimaki. “Tikka” exclusively makes the T3 carbines, in sixteen sub-model and 22 different calibres. Those rifles are known for their accuracy and quality, as are all “Sako” rifles. Tikka T3 sub-models are: Hunter, Hunter Stainless, Hunter FL, Hunter, FL Stainless, Lite, Lite Stainless, Camo Stainless, Laminated Stainless, Battue, Battue Lite, Forest, Sporter, Varmint, Varmint Stainless, Super Varmint and TAC. These names reveal a multitude of hunting, competition, varmint and tactical versions of one rifle.

Technical characteristics of the T3 models are similar across the entire line, making it an excellent starting point for this review. The most important part of every rifle is its barrel. In this case, the barrels are cold forged in huge, strategic and expensive machines for cold forging of barrels. For Sakko and Tikka T3 rifles, forging is done on the same machine, using the same technology and from the same materials. “Tikka” barrels are made from chromium-molybdenum alloyed steel or high quality high-alloy stainless steel. Barrels are always made in free floating technology, meaning they never touch the stock at any point along the barrel’s length. Special attention was given to the muzzle, because that detail is crucial in determining the rifle’s accuracy. The crown of T3 barrels is done with maximum of hand craftsmanship. The hull is closed, meaning it only has an extractor opening. Top of the hull is flat, adjusted for attachment of Sako-Tikka “optilock” optical sight. Picatinny or Weaver sights can also be attached.

Front of the safety is sloped, so the bullet case is wholly within the safety. Lateral, wide steel extractor is a push type extractor. Meaning that in the moment when the rifle is locked, the extractor falls into the lower groove of the case. Round spring ejector ejects the spent casings or unfired bullets to the right. The bolt handle is mostly straight and pear shaped at the bottom, it allows cocking, emptying and loading of the barrel. The handle can be removed from the round part of the bolt mechanism. Smooth and quiet operation is the result of fine workmanship on the bolt mechanism. Tikka T3 is not an expensive rifle, however, the softness of cocking easily equals the one in most expensive Sauer and Sako rifles. The two-position safety catch is easy and precise to operate. Set back, everything is blocked and safe, set forward, ready to fire. It also has two red dots that indicate that the rifle is ready to fire. Tikka rifles T3 is supplied with ammunition from the single column detachable clip magazines. They are made of strong glass fiber reinforced composite. The magazine holds 3, 5 or 6 rounds depending on model and caliber. Magazine release is located just in front of the magazine, so the magazine always falls directly into the hand of the shooter after release. Excepting the Battue model, equipped with quick mechanical sights, T3 rifles do not have mechanical sights installed. They allow for installation of other optical or other sights. It is not a bad solution, because removing sights for installation of new ones usually causes unattractive damage to the rifle.

The Importance of Stock

Another important item for rifle accuracy is the firing system. These rifles have single-stage pull with positive trigger feel. It is easily adjustable through the magazine well from 1 to 2 kg (2 to 4 lbs). The adjustment is done through the magazine opening. The trigger is single action and has an option of firing as a single set. Transfer is excellently done, as is the absolute stability of the connection of stock and hull. The stock can be made from high grade walnut or glass fiber reinforced copolymer polypropylene, depending on the model. Composite stocks also have checkered patterns on grip areas. Spacers allow adjustment of stock according to the physique of the shooter. Sling swivel is standard in all models, and stocks are specific for sub models if T3 rifles.

The Hunter model is intended for hunting large game. It comes in different variant s depending on twenty different calibers it can use, they range from small .204 Ruger all the way to the largest 9.3×62, .300 WM and .338 WM. Depending on the caliber, T3 Hunter barrels can be 510 (20”), 570 (22 7/16”) and 620 (24 3/8”) mm long. Although these hunting carbines have classical full stocks made from full high-grain walnut wood and normal length barrels, they are exceptionally light. Ranging from 3 to 3.2 kg (6 5/8 lbs. to 7 lbs.). Even with high quality optics installed through Sako-Tikka optilock mounting, the rifle won’t be too heavy for a day of hunting. Optilock mounts, developed by “Sako” engineers, come in four heights and two diameters (25.4 and 30 mm). The inner scope saver ring is made of polymer and acts as a ball bearing which prevents the scope tube from being deformed. It is an excellent, solid and expensive mount. 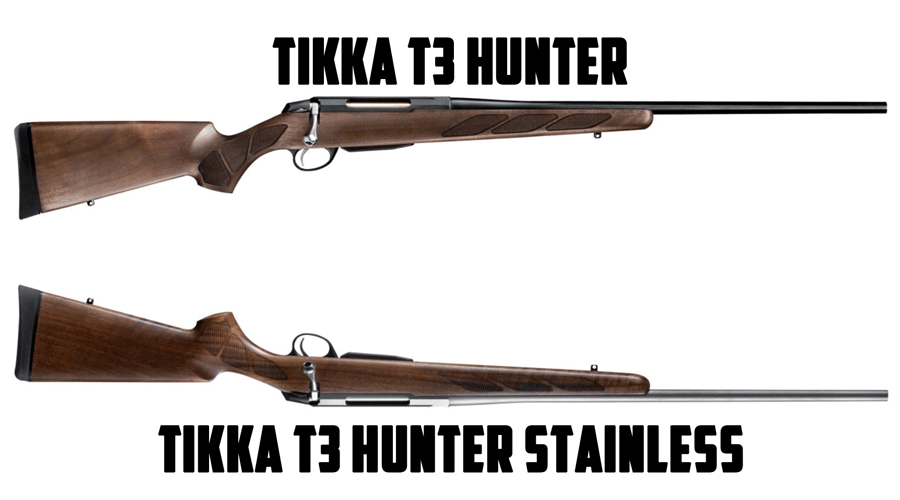 This rifle has a laminated stock, adjustable in all planes and a heavy bull barrel 610 mm long. It fires .222 R, .223 R, 6.5x55SE, .260 R and .308 W rounds. The weapon weighs 4.4 kg and is of excellent quality. It truly represents the ultimate target rifle, capable for creating smallest bullet groups. Unlike other, much more expensive rifles, this one is actually affordable.

Varmint is a very popular brand of rifles, it includes Tikka T3 Varmint, T3 Varmint Stainless and T3 Super Varmint. These are multipurpose rifles that fire .22-250 to .300 WM rounds. Their barrels are 600 mm long and they have black polymer stocks. Adjustable cheek piece is ideal for long range shooting and due to its low weight of 3.4 to 3.7 kg, the rifle can be used for hunting. This is another model that offers much but won’t bleed your wallet dry.

With high quality and very reasonable price, significantly lower than similar quality rifles, T3 models deserve a sincere recommendation and offer plenty of bang for your buck.
Images with courtesy of tikka.fi