Stevens model 200, although low priced, with more than basic finish and plastic stock, this is a formidable rifle which offers a platform for a number of modifications combined with match-grade accuracy.

The company which makes this rifle is much less known brand than the company which gave birth to it –  “Savage”, the company which in 1920 bought “Stevens” factory (since 1864). Savage is famous for their not too pricey high precision bolt action rifles,  and five years ago they tried to breach into the low cost market, using the very model Savage 200. 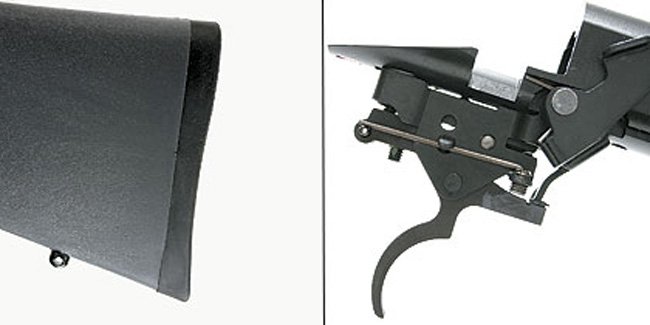 Rock-solid bond between the stock and the action

Even the first glance uncovers that there is more to this rifle than it meets the eye. Matte finish on the surfaces and square, acute edges are tell-tale signs of the price range.  The grey synthetic stock, clearly molded, even slippery a bit won’t attract anyone who is used to quality wooden stocks. However, as soon as you take the rifle and aim it, the overall impression changes drastically. The shooting range has even more severely silenced our doubts.

Stevens 200 action is the same as one used for more costly Savage Model 110. The bolt handle has the standard 90° travel, the safety is right where it should be for all hunting rifles – on the neck of the stock. The trigger, although not too soft, enables accurate fire with relatively short pull. The magazine is completely enclosed within the stock, which is one of the drawbacks because the remaining ammunition must be unloaded through rifle’s action. Stevens 200 is delivered without iron sights, as the designers have probably foreseen that a highly accurate hunting rifle will primarily be used with a scope.

The action, which is the heart and soul of every rifle, is constructed with reduction of manual labor in mind, but the solutions which made this possible have contributed to the precision of all rifles on which they are used. The forged steel action body is rotund in shape, with no cams. The shoulder for recoil transmission is a washer which sits between the barrel and the bolt. The method for securing the barrel is also simplified. Unlike classic solutions, where the barrel rests on the shoulders on the thread, and is calibrated by machine during the installation, both Savage and Stevens have barrels fixed by additional safety screw, which allows barrel replacement by a gunsmith, but quite simple with no need for machine work.

Another interesting feature is the bolt, which has locking lugs positioned on a separate head, which is connected to the body by a spring which pushes the head in the forward position and provides surprisingly precise fitting on the locking shoulders. This solution makes “Savage” actions to be cheap to produce and extremely precise at the same time. On the model which we tested, the extractor was located in one of the lugs, while the button-shaped ejector is also installed onto the bolt.

The bolt operation is “push feed” type, and unlike the more common “Mauser”, it does not lead the cartridge from the magazine, since the cartridge sits freely on the top of the magazine and is pushed directly into the barrel. When it finally sets in the chamber, the extractor grips the cartridge. A design like this enables for the bolt head construction which grips the bottom of the casing from all sides.

The bolt handle is a separate piece, manufactured by casting as well as most of the parts. It is fixed onto the bolt body by a hex screw. It is checkered on the upper side, with the explanation that it prevents hand from slipping while locking, as the “push feed” action calls for firmer push, so that the extractor claw could overcome the rim of the casing. On the right side of action bridge, again unlike with the “Mauser” type actions, there is a lever for the bolt removal.

The stock also bring some interesting innovations which, besides cutting the costs, improve the rifle’s accuracy. Stevens boasts a plastic, molded stock which houses the action through metal inserts, which are precisely embedded in the cast prior to molding, similar to Glock’s solution for the inner frame base. All these features combined ensure firm connection between the stock and the action, which is a prerequisite for high accuracy.

The firing mechanism is a standard one, with one trigger which is adjustable for pull and travel length. The rifle we tested had a relatively crisp firing, with the force of about 2 kg. Stevens comes with this type of trigger only, which separates it from more expensive Savage models which are delivered with “accutrigger” – a trigger which can be adjusted to extremely short travel and weak force of pull, and has an additional safety similar to the one on Glock models – a lever inserted through the cutout in the trigger. 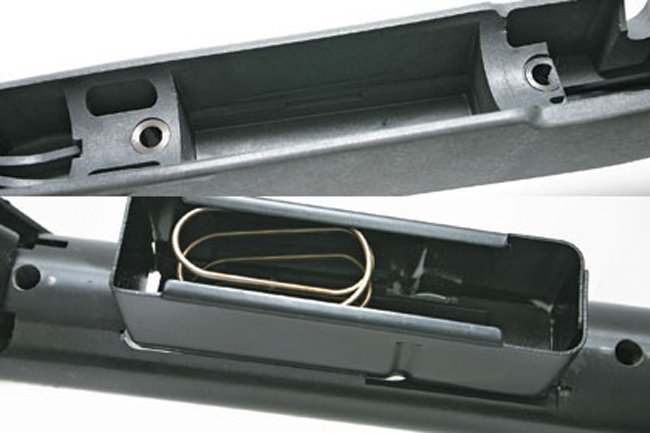 Its plastic stock and relatively lightweight big caliber barrel result in small weight of the rifle, which is one of the main reasons why Stevens originally doesn’t offer the Model 200 in such a strong “African” caliber. The owner of Stevens we had a chance to try opted for this combination as an ideal system for hunting in South Africa, where he grew up, and where rifles are often carried in hand, without a sling, and rarely fired. Regardless of the additional buffer attached over the original rubber butt on the stock, the kick is not mild, especially if fired on the range from a bench.  But, as the owner of this rifle says, in a hunt, this feature adds for the of adrenaline rush.

Stevens, or if it sounds better – Savage, is yet another proof that low price, achieved by optimizations and adaptions of the design to the manufacturing process, thus avoiding manual labor of highly qualified craftsmen, mustn’t always mean reduced versatility of a weapon. In spite of cheap looking plastic stock and finish, no real hunter would refuse a rifle with almost match grade accuracy with such possibilities for upgrade and customization.
Images with courtesy of shootingtimes.com and gunreports.com.