Golden, Colorado, U.S.A. Earth. Black, laser engraved words on a piece of CPMN S30V steel. This is not a message on the side of a spacecraft meant for the extraterrestrial intelligence. Every knife enthusiast knows that every high-end Spyderco knife bears this inscription on the ricasso. For years, Mr. Sal Glesser’s family operation stands for the leading company for production folders. Despite their flattering position, designing the new and improving the existing solutions is the continual process in Spyderco. The result is not always ideal, but among the vast diversity, some models stand above the others.

One of the earliest folders still in production is the Police model. Besides the three generations of this knife, one German LEO together with a knifemaker Ulrich Hennicke, using the basic design and his experience adapted it to tactical needs. The new, fourth version was called Ulize. It’s a thin and stylish 104 mm recurve blade, with a centered tip for easier penetration and prominent belly for cutting tasks. Thanks to the finely textured G10 scales, and drilled out liners, the knife weighs only 136 g. Lock back feature makes it comfortable for righties and lefties alike. With all positive and attractive features, this is above all a dedicated tactical knife, designed for professionals who deal in saving and taking lives if needed.

Another design that has endured the decades of popularity is Calypso, one of Spyderco classics. Shortened as Caly 3.5 CF, the secret of its long life is simplicity and versatility. It’s a utility knife with the broad leaf-shaped 89-mm flat ground blade and a flat and comfortable handle with carbon fiber scales. The blade steel is triple laminated with Japanese ZDP-189 powder steel core, which contains staggering 3% of carbon with hardness of 63-65 HRC. The outer layers are 420J2 Stainless, with much lower mechanical properties. The weight and proportions are ideal. Until you need it, those 89 g disappear in your pocket. It’s thin and pointy blade can do any task becoming a folding knife.

The name of the knifemaker Brad Southard is relatively new in the blade world, but he became famous as a designer of tough, yet slick folders. His cooperation with Spyderco gave birth to the first Spydie with a flipper. The flipper is a feature pioneered by Kit Carson, and is basically a protrusion of the ricasso on the cutting edge side. When the blade is folded, the flipper protrudes between the liners on the back side. Bu pushing or pulling it down, the blade flies open. The blade of Spyderco Southard is made of Carpenter CTS-204P super steel. Although its 88 mm blade is elegant and very organic, the hollow grind runs up to two thirds of the blade height, which is the feature of many production knives. What the knife lacks in the blade it makes up in the handle. The combination of titanium and G10 with Reeve Integral Lock is lightweight and able to withstand all sorts of abuse one is ready to throw at a $400 knife.

Belonging to the third generation farmer family, Ed Schempp is used to hard jobs, but is also a dedicated knife designer who often draws inspiration from the traditional forms. This time he gave it his best to come up with an original tool for the hardest of jobs.  His model Tuff really stands up to its name. Extremely resistant CPM S3V blade is 4 mm thick and 94 mm long, set at a 20 degrees angle to the handle. This is the least stressful and the least tiring position for the cutting jobs that take time. The G10 and titanium handle is dotted with unusual craters which help traction. The knife locks with the Reeve Integral Lock.  The unique feature of the knife is the groove which runs along the blade from the opening hole to the tip.  It reduces the weight of the heavy blade stock and facilitates easier opening. The knife weighs 179 g. 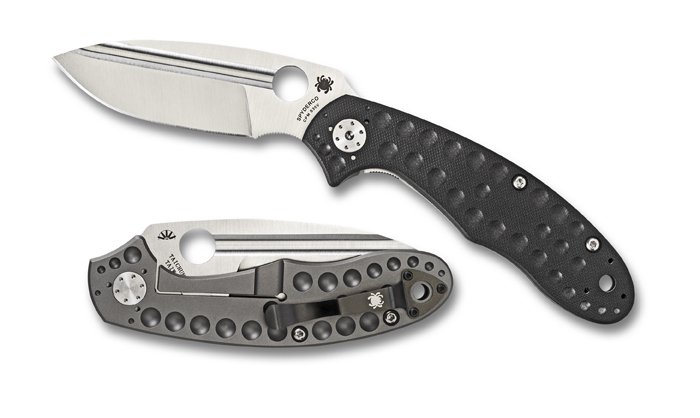 Knives have been made and used for millennias, and designing something completely new is harder with each passing day. On the other hand, there are proven different solutions which are used in many parts of the globe. A few years ago, Spyderco has launched the Ethnic Series Knives which emulates original centuries old designs. So far it included Persian-style blades,  shabaria, barong, p’kal, kukri, kriss and recently Hungarian traditional fejesgörbe. Designed by Szakonyi Gabor, Spyderco Hungarian Ethnic Folding Knife with CTS XHP super steel 92 mm long blade combines the pleasant curves of the original with modern materials, like polished G10 used for the handle and reliable liner lock. The steel bolsters are real eye catchers on this knife, but their up-swept shape stands out from the strict functionality of the original. 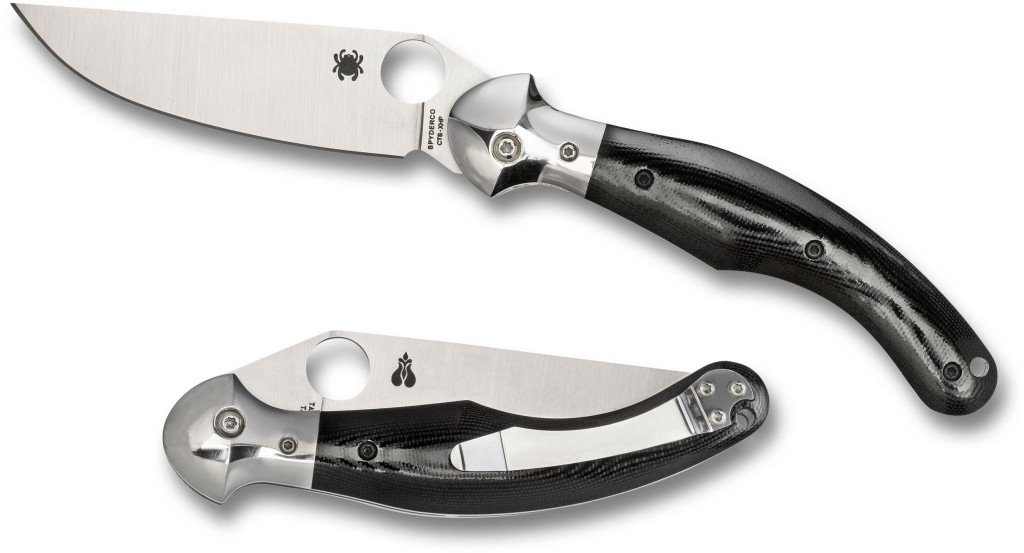 Since the early 90s, the compact Spyderco Delica model set foundation for what is today called a workhorse model. As one of the best selling models, the 4th generation clips itself to the pockets of people of all occupations. To honor the critical role that Delica had in Spyderco’s history, the premium version Delica Titanium Damascus was launched. It’s 75 mm damascus blade forged of cobalt alloy VG-10 and a softer chromium steel is a breathtaking pattern of lines contrasting the gray titanium handle slabs. And the best part is, it is useful and versatile as only Delica can be. 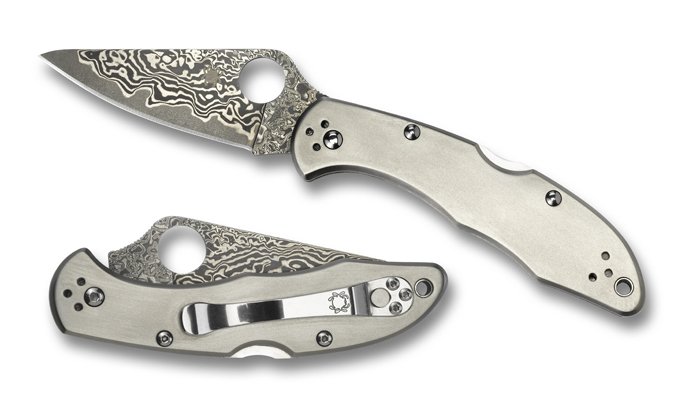 Somehow, the fixed blades were always outside the Spyderco’s focus, although there were always a few of them in the lineup. The new Spyderco Enuff series offers exactly what it says – a blade that is long enough, a handle large enough and enough strength for every knife task. There are three versions with the identical 101 mm black FRN handle and identical Boltaron sheaths. There is a choice between three classical 70 mm blade shapes; the drop point, leaf-shaped and the fully serrated sheep-foot, ideal for cutting fibrous and sinewy materials. The tang is drilled out, so the knives weigh only 108 g. The knives have an excellent balance and the cutting edge starts only 3 mm from the handle which enables for the maximum force cutting, as in whittling for example.

Stuart Ackerman is a custom knifemaker from New Zealand, with a reputation for making functional utility knives. The new Spyderco Serrata model is one of those. Its massive 118 mm blade is made of 440C, 5.2 mm thick stainless steel. What surprises is the manufacturing technology. Instead of forging or rolling, this knife is cast. The people at Spyderco say that in this process the steel develops a specific crystal structure in so called dendric pattern akin to a branching tree. Apparently, it has certain advantages during the field use, maintenance and sharpening. The balance, handle shape and the general impression is outstanding. The handle is black micarta and the knife comes in a Boltaron sheath. 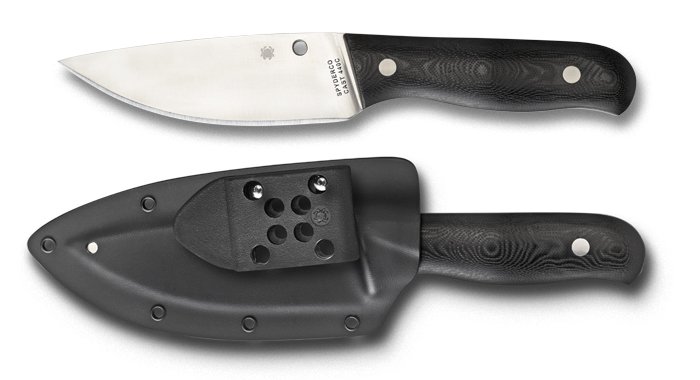 Most of us choose a folder for our EDC use. However some of us prefer smaller fixed blades. Spyderco offers several knives in that range and one of them is Swick 3. It’s a lightweight and compact integral knife made of a single slab of S30V steel. This 60 g knife is 3.7 mm thick and has a 60 mm flat ground Wharncliffe blade. The large finger hole allows for the firm grip and makes precise cuts much easier. The knife comes with no sheath nor handle scales, so every user can customize it by their liking, either by wrapping a rope round the handle or crafting a unique set of scales. 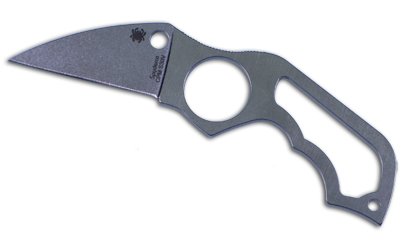