Spanish company SPS improved the immortal Colt M1911 design and made an excellent compact sport pistol. During the IPSC European Championship which took place in September in France, many companies which produce guns and accessories for IPSC had their booths. The booths promoted the companies’ products, but some of them also had options for direct sales. That’s how we first met the outstanding SPS company, more accurately their pistol made for the Modify Division.

Practice shooting includes pistols, revolvers, rifles and shotguns. The most popular category is, however, pistol. It is divided into divisions: Production, Standard, Modify and Open. Guns for Production, Standard and Modify divisions have dimensional limitations – they must fit into the control box which measures 225x150x45 mm. Production and Standard pistols cannot have compensators, nor collimator and reflex sights. Modify-class pistols can be fitted with compensators and the mentioned sighs, but nonetheless must fit into the control box. Producers have an uneasy task to create pistols with compensators and reflex sights, which can still fit into the 225x150x45 mm control box. It takes many cuts and resourcefulness.

The success followed the tradition

By the end of the 20th century, most European countries faced the laws which prohibited civilians from carrying pistols and revolvers. The consequence of such policy was that many weapons factories were closed or simply shifted their production to more “civilian friendly” programs. The Spanish companies were the ones hit hardest by these measures, as they used to produce most beautiful pieces od compact handguns. Names like “Astra”, “Star”, “Llama” whose products marked the 20th century became history. On the other hand, the twilight of pocket pistols and revolvers meant a new dawn for producers of sport handguns, as it was the time when a new sport, the IPSC started to gain popularity. In 1966, a company called SPS was established in the town of Ripollet outside Barcelona, with the production focused on sport pistols. 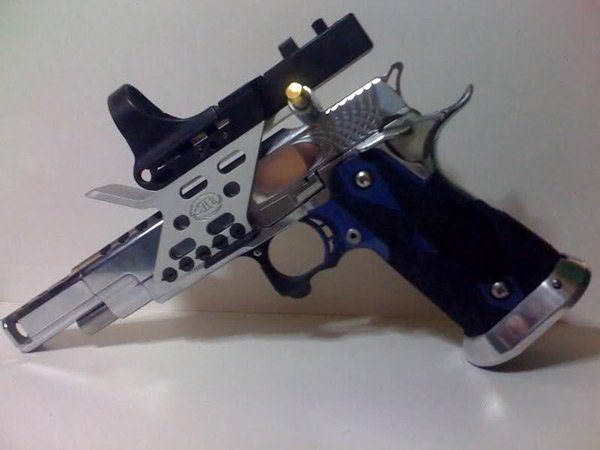 The centuries of gun making in those parts of Spain guaranteed that it will become a success. Its director Mario Llobet purchased the state-of-the-art CNC machines and employed young constructors and gunsmiths. They acted rationally: not inventing anything new but adopting and improving almost a century-old Browning construction called Colt M1911. Following the example of the American STI, SVI, “Caspian”, Canadian “Para-Ordnance” and the Israeli “Bull”, the Spanish SPS was also equipped with the wide magazine well, suitable for high-capacity double stacked magazines. As such magazine wells are difficult to machine from a single piece, and micro-casting in extruders is neither much easier nor cost-effective – the Spanish, like the STI and SVI, went for the polymer magazine wells.

Once made and tested, the molds can make thousands of cheap casts which are all the same. They can even be made in colorful varieties. The company exploited the option and now they offer the IPSC shooters blue, red, black, green and pink magazine wells – handles. That was no joke, however. The point was to follow the trends and separate IPSC shooting from anything that can be perceived as militant, violent or criminal. Hey, no one has ever robbed a bank holding a red gun!

As the IPSC pistols fire tens of thousands of rounds in their life time, the polymer receiver was out of question. The receiver is all stainless steel, in full length, and it houses the firing and locking mechanism. The slide was also copied from Colt M1911, with some general improvements and adaptations. 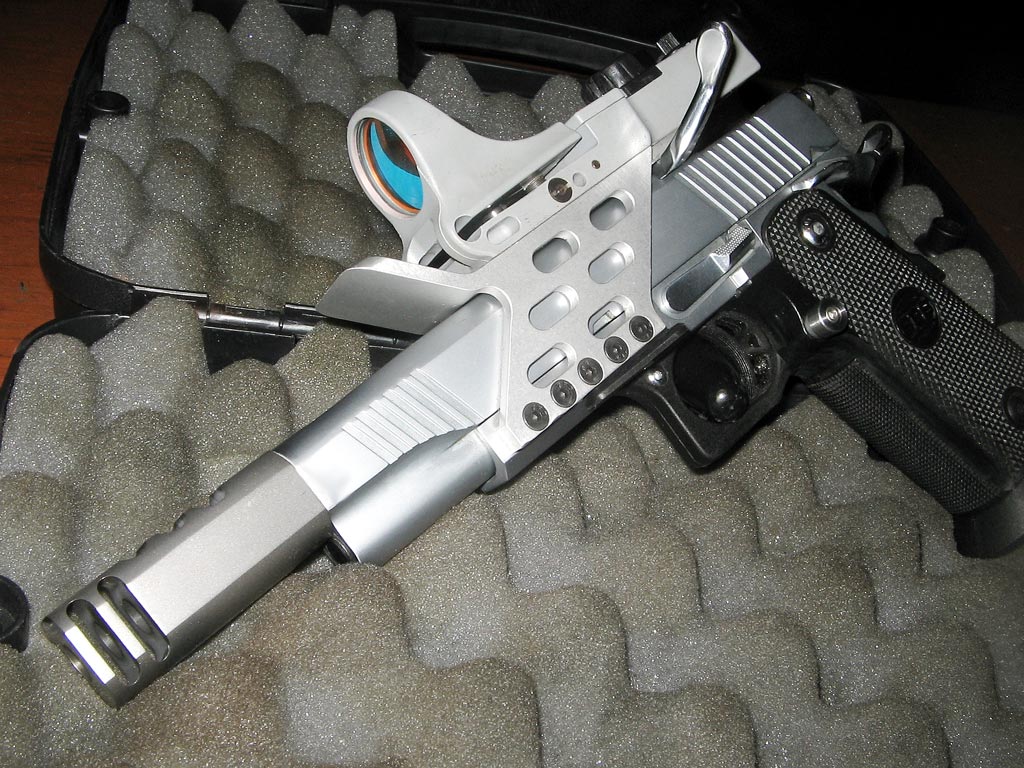 And the barrel? Again, the smart choice. For a barrel manufacturer to build a name takes a long time and cost a lot of money. Why not take ready-made barrels, machined from top-notch stainless steel by famous German company “Lothar Walther”? Another smart choice was avoiding the barrel bushing – instead barrels have a conical shape in the forward part. The ones that have to be compensated, though, end in a long threaded part on which the compensator is installed.

All parts of the gun are separately heat treated in the factory. It is especially important for the magazines. Many factories buy “outsourced”magazines for their models from companies like “Metz Gare”, “Ram Line” and others. With its competitive price and quality, SPS magazines became popular among shooters. They are made from stainless, heat treated steel and are polished on both outside and inside.

Shooters who use American STI and SVI pistols often buy SPS magazines because they are reliable and cheaper. The magazines for the Open Division which are limited to length of 170 mm, take up to 29 rounds of .38 Super/9×19. For shooters that means that they can go through most of the stages without reloading or one reloading only. This magazine is definitely their best-seller, with the price of €62.

Aiming made much easier

Thanks to the good people on the SPS booth, we took a closer look on SPS Modified 4.5”. This compact pistol has a 113 mm barrel and is chambered for 9×19,  .38 Super,  .40 S&W and  .45 ACP. It is 207 mm long,  and 140 mm high without the “glass” – which is how the shooters call the reflex sight, and 40 mm wide. With measures like these and the slanted handle bottom, it easily fits into the control box and weighs 950 g. The variant without the compensator, the upper edge of the slide is slanted as well. The gun features an active Colt safety and, if required, an adjustable SA trigger. 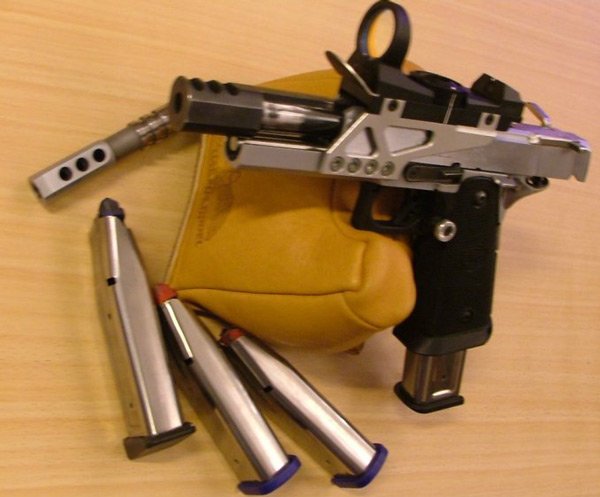 This is an exceptional sport pistol and firing it is different than with a serial pistol. The two shots follow each other in lightning speed, right on the spot with minimum straight recoil. In the rapid fire, the burnt gases exit the barrel through the ports on the upper side of the compensator, keeping it in horizontal position. This is truly a nice “muscle pistol” with comfortable handle. SPS also produces mounts for “C-more”, “Docter” and “OKO” reflex sights, which are mostly used types, besides the “AIM Point”. These sights, most importantly the “C-more” make aiming much more easier, especially for shooters who are not used to the Modify Division.

The SPS pistols won many trophies, and it is used by Gabriela Kraushofer, the current world champion in Open Lady. The prices of SPS pistols vary from Standard to Open models in Europe from €1,460 to €1,900, which is still cheaper than a STI, STV or “Caspian”…