SIG P-320: Why Are You Wearing That Glock Suit?

For some time now, classic high-capacity service pistols with DA/SA operation (like SIG P-series) are being replaced by new designs with polymer frames and hidden hammers. In the 80s Glock was the first model to start this silent revolution. Since then, a Swiss giant SIG tried to breach into this part of the market twice.

The first time it was some 20 years ago with its SIG Pro model, which is still sold today by the name SIG 2022. It is offered in 9 mm Para, .357 SIG and .40 S&W. Although it is an excellent pistol, it was received as a cheaper option to more popular P-226/229 models, and those who were looking for a Glock or the new Smith & Wesson MP simply ignored it.

The second attempt came with the model P-250, which was marketed for its easy and fast format change. In short, the whole mechanism could be transferred into a bigger or smaller frame with additional options like caliber shift or barrel length. Still, its DAO trigger made it unpopular with law enforcement agencies, whose members prefer models that have SA option as well.

Eventually, SIG engineers decided to start developing their own service pistol with polymer frame and hidden hammer. An engineer shooting star Ethan Lessard was the head of the project which was designated as P-320, so that a difference could be made between the new concept and the P-226 series. The first prototypes were based on a P-250 polymer frame. By the year 2011, the development ground to a halt, but in June 2013 the first, so-called zero series, was ready for testing. In February 2014 the new SIG P-320 hit the storesin the USA. 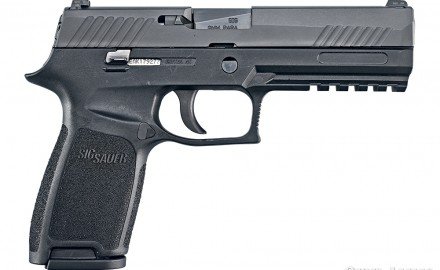 Like with the previous models, they kept the standard rotating takedown lever which requires removing the magazine and pulling the slide rearwards. With Glock models, it is enough to pull the lever down, pull the trigger and remove the slide pulling it to the front. Pistols with classic hammers cock the mechanism with the slide moving back, while pistols with hidden hammers do it when the slide moves forward. The decades of developing safety procedures inspired SIG designers to stick with the traditional takedown routine, although P-320 also cocks with the slide travelling forwards.

The designers wanted P-320 to have the same trigger travel length and force of pull from the first to the last round. To achieve this they had to copy the Glock one more time. The trigger spring is partially engaged even before the gun is cocked. It results in a 5 mm trigger travel and the force of pull that can be adjusted between 2.5 and 3.4 kg, which is more than acceptable for a service weapon. 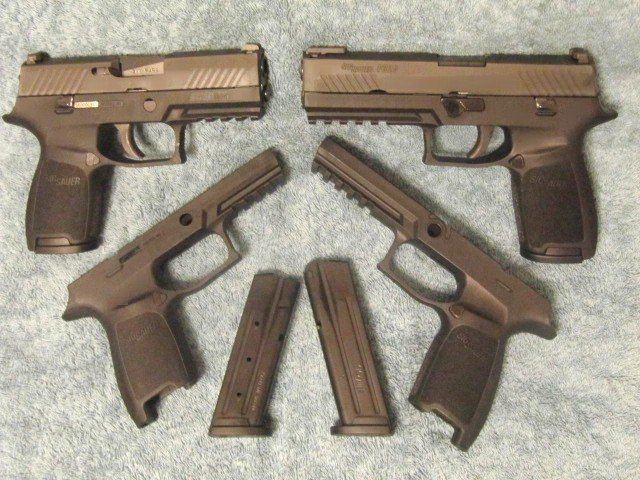 Its polymer frame is basically just a covering around the insert, a mechanism chassis machined out of stainless steel, which houses slide rails as well. The bottom part of the frame features the omnipresent Picatinny rail for all sorts of tactical attachments. The grip is well shaped and it will suit different hand sizes vie interchangeable back inserts. The grip could be more angled though, as its axis is pretty close to vertical.

The pistol features standard SIG black finish and excellent SIGLITE luminous dots on sights, visible even in full sunlight. One of the selling points for SIG P-320 is its modular design, which is out of reachof most of modern service pistols. The dimensions can be changed quickly and easily and, consequently, the purpose of the pistol, from the full sized combat pistol, via the Carry version for officers and military police to the compact model for concealed carry. This concept is called MHS (Modular Handgun System).

Although SIG has always had civilian market in its sights, the real reason behind the appearance of P-320 is the tender for a new MHS for the US Army. The bottom line is that P-320 is far from a perfect pistol. Even within the company there are models that currently offer better performance. Still, the Force is strong with this design and that is something that shouldn’t be ignored.