The importance of submachine guns in modern warfare is not likely to diminish anytime soon, although almost every assault rifle in the world is followed by its carbine version. Submachine guns are simple and inexpensive weapons, with straightforward manufacturing process, and there are countless different designs, as almost every country has developed at least one domestic model. However, there is one submachine gun which has risen above the others and in the last few decades built an army of users. It is, of course, Heckler und Koch MP5. Despite few shortcomings experts and users alike consider it the best weapon in class and it’s holds a world record in number of armed forces which use it. 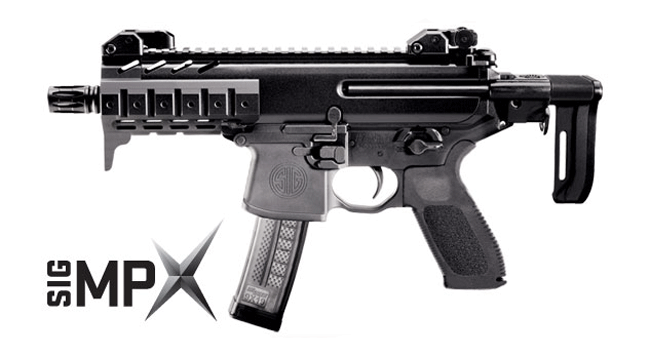 Excellent ergonomic solutions, good accuracy and control in full-auto, ideal weight and capability for wide range of tactical attachments made it the favorite weapon for close quarter battle (CQB). On the other hand, the elaborate locking system, with rollers and delayed blowback makes this weapon expensive and demanding for production, as it requires skilled workforce and quality machinery. For that reason, Heckler und Koch company has moved to a simplified model, designated UMP, with a molded polymer frame and delayed blowback operation. The original MP5 model is currently produced only in one factory in Turkey, which can by no means satisfy the demands. While the mother-company is looking for an appropriate replacement for its bestseller, the competition is restless.

An heir or usurper?

A Swiss-German concern SIG Sauer is one of the most revered players among the manufacturers of high class small arms intended for service and civilian use. This time, they came forth with an interesting weapon, with a clear intent to claim the throne which has so far held by the H&K MP5. At the “Enforce Tac” gun exhibition in March this year, the visitors could see a family of promising submachine guns dubbed MPX. These new weapons are introducing some 21st technology in design and manufacturing. Although, at the first glance inspired by the MP5, the new SIG MPX is the first, truly modular automatic platform which uses pistol ammunition. The gas operation with the short stroke piston is relatively new feature, which has just been introduced with assault rifles. The application of this solution definitely increases reliability and resilience, when compared to existing Vorgrimler system of delayed blowback with return rollers. What is more, the self-regulating gas valve provides a safe operating cycle, with either 9 mm Para, .40 S&W or .357 SIG ammunition, with no need for additional adjusting or manual switching.

The best of both worlds

The lower portion of the receiver is made of aluminum alloy and polymer, and the ergonomics are similar to the M-4/M-16 assault rifles family, so the users can easily adapt from one weapon to the other without any special training. The weapon’s modular construction makes changing the caliber, barrel length or attaching integral silencer much easier. The detachable upper portion has tubular construction and it houses the rotating bolt, barrel and the short stroke gas operation with a self-regulating valve. The handguard is made from aluminum alloy and it accommodates a long Picatinny rail. 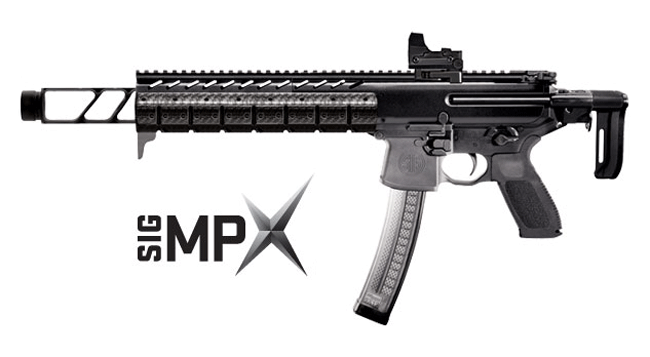 The MPX has outstanding folding iron sights, but they are only backup solution, because this weapon was intended for fast reflex sights in combination with laser sights and tactical flashlights. For this reason, the handguard can be equipped with Picatinny rails on 3, 6 and 9 o’ clock positions as well as with vertical forward grip. Aside from aluminum rails, the ultra-light carbon fiber ones are also available.

Changing of the barrel (and the caliber) is simple and fast, with no need for complete disassembly. It only takes releasing the safety lever and the barrel can be pulled out. Even with the caliber change, besides the barrel, it only takes changing the magazine. The self-regulating valve will do the rest. This feature improves the versatility and usefulness of the weapon. From the short-barreled submachine gun which comes handy in cramped spaces and vehicles, to the long silenced barrel, this weapon covers a wide range of tasks. In addition, the users can choose between widely available military 9 mm Para, the heavy round of .40 S&W, which became the most popular police caliber in the States, or the super fast .357 SIG, which offers extended range and penetration. 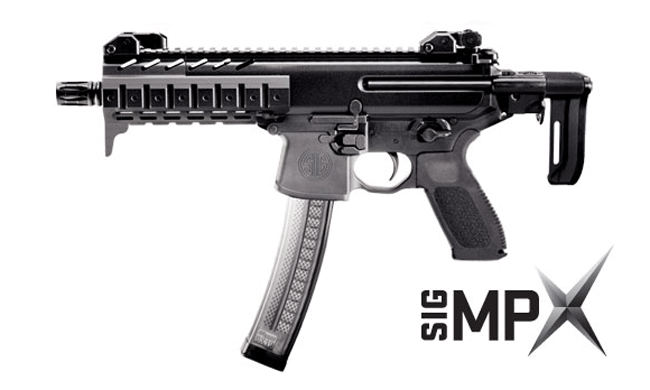 Regardless of the caliber, the grooves twist rate is the same 1:254 mm. The MPX fires from closed bolt, which significantly increases the accuracy. When the last round is fired, the follower stops the bolt in rear position, so that after reloading there is no need for cocking once again.

In the basic configuration, the MPX comes with 165 mm barrel, with the 114 mm one also available (MPX K version). The regulations for the US civilian market propose the minimal barrel length of 407 mm. SIG has bypassed this, a bit absurd regulation by fitting its semi-auto model MPX C-9 with standard 165 mm barrel, and over it a 242 mm long skeletal construction, dubbed the gas brake. Interestingly enough, by fitting a simple tube over this “abomination” you get a surprisingly effective silencer. If the tube is filled with some kind of sound-absorbing material, the civilian SIG MPX becomes a high-class suppressed weapon, comparable with integrally silenced MPX SD which is sold only to government agencies. The civilian version is about to hit markets in the States these days, with the price between $1,800 and $2,100. The stock is collapsible, just like MP5’s, but is is equipped with bigger shoulder rest, which is more comfortable. The manufacturer leaves the option for sideways folding stock, if that is more to buyer’s taste.

The new submachine gun is an attractive, technologically advanced weapon, and based on everything it offers, has a good chances for success. But, it wasn’t the first one to challenge the dominance of the submachine king – the H&K MP5. 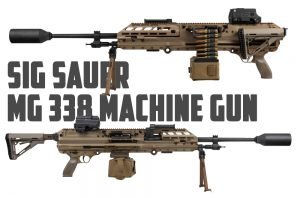