Top Quality manufacture and classical weaponry has placed the Canadian company at the top of world production.

It is well know that the “Para-Ordnance” company was founded in 1985 by two schoolmates – Ted Savo and Tanos Polizos (Both European emigrants to Canada). In the beginning, they made only pain ball models, only to quickly begin the manufacture of real weaponry (combat and competition handguns with M-1911 system), and they gained worldwide fame when they made the first true, high quality (and to this day, the best) metal double-stack with high-capacity magazine for M-1911. During the 2009, the company has seriously expanded their business, by founding the sister-company “Para USA” in Pineville, North Carolina. Finally, early this year, they became a part of very serious group of American military capital (Freedom Group), owned by “Cerberus Capital Management”, thus entering the competition with largest American manufacturers like “Smith & Wesson”, “Springfield Armory Inc.” and “Kimber Manufacturing”.

The company itself has made a complete transformation during the last year and went from being just a civilian to one of the more ambitious military manufacturers. They even moved their HQ and capital from Scarborough, Ontario in Canada to the USA. It is not surprising then, that the leading model of this company (famous for its M-1911 system handguns) for 2012 a Spartan, ultra-modern, high quality version of that exact gun (coming in two types), meant primarily for servicemen and called simply Para 1911 Black Ops. 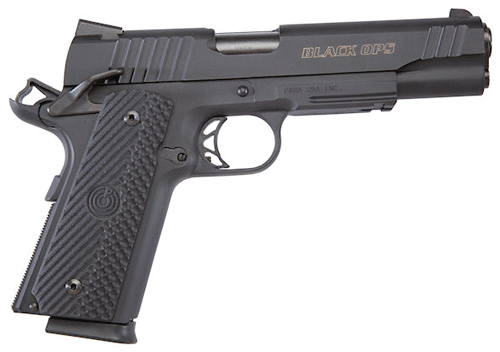 New model of Para 1911 Black ops .45 ACP, is single-stack and is of widely known classic make, made from cold forged stainless steel with lowest margins of error. This combat pistol has a total length of 210 mm, match grade classically configured cold forged barrel, 127 mm long. Its total mass is 1,120 g without the magazine.

Para 1911 Black ops uses 8 round magazines (it’s delivered with two clips with thick plastic cover), and its commands and function do not differ from other artisan .45s.

Slide does not have any specific markings. It contains a barrel with a classic extractor and an ejection port (top of the slide). It uses Colt-Browning short-recoil system. The barrel has a leftward twist rate of 1:16 of inches and six grooves. There is a carefully crafted feed mechanism at the beginning of the chamber, made so it could work with all types of bullets. This model has a full length recoil spring guide rod, which improves accuracy and reliability.

Only a small number of these guns was made to the same high quality like the model made by “Para-Ordnance”. Top models come with a high price, so both types of Para 1911 Black Ops cost 1,299 USD.

A Century of Reliability

Sides of the slide on both front and back have a very aggressive and shallow, flat and wide, symmetrical surfaces for cocking. Ejection port is widened, which increases operating reliability. Classic internal extractor which confirmed its reliability in over one hundred years of service is strengthened and modified even more.

Frame of this gun with Picatinny rail on the lower part of tipstock also brings nothing new, but it has been fully tricked-out. The frame is traditionally shaped, it is completed by straight housing for the firing pin, chequered with thirty lines per inch. Other parts are mounted on it according to the most modern combat standards, even though there are no visible frills. It has a fully adjustable selective trigger with trigger stop. The trigger is lightened, with an incision. Beaver tail is also included, with a wide ridge at the bottom and ambidextrous long but narrow lever of the manual safety lock, with curved and ridged lever surfaces. Classic joint connects the slide and the frame into a whole, while round button of the magazine catch is enlarged and finely chequered. Para 1911 Black Ops is completed with sharply chequered, thin and comfortable holster made from G-10 fiberglass grip.

Top Quality is the Name of the Gun-game

The best thing about this pistol, however is its final processing, impeccable composition and high quality ionbond synthetic finish. There is no extended loading chamber, but the interior of the frame is finely worked, making loading both quick and safe. Two types of this model differ only in sights. Limited model has micro-adjustable rear sights, made by the LPA Company and a fibre-optic front one. The standard model has a low Novak with Trijicon night-glowing dots. Concerning accuracy, it can be numbered among the better pistols of this type. With all bullet types, hit groupings in 25 meters are in the 38 and 60 mm diameter, which is a characteristic of only first-class, truly excellent weapon. It is a truly impressive combat firearm, especially considering the deadliness of heavy .45 ACP rounds. This is why Para 1911 Black Ops is a truly effective and deadly weapon whose quality is beyond question. We have not tried Black Ops, but if the quality of previous models is any indication, the latest one is a certain winner.