Home » 3D Metal Printing an AR-15 at Home? Is There a Price for Freedom?

3D Metal Printing an AR-15 at Home? Is There a Price for Freedom?

The appearance of the first fully operational and lethal 3-D printed gun exploded like a bombshell last year. Now everyone can build a homemade weapon just by downloading the schematics and hitting the Print tab. These days, the pioneer of the 3-D gunsmithing, Cody Wilson, has revolutionized the concept even more, by introducing first metal designs.

The Ghost Gunner is the name of his new project. Basically it’s a milling machine operated by a PC. These computer-controlled machines operate a drill head that moves in three-dimensional space, carving preset shapes into polymer, wood or aluminum. Wilson’s mill, however, is adjusted to create a single specific object: the lower receiver of an AR-15 assault rifle. The machine is sold by Defense Distributed, a company owned by Wilson, for $1,200.

No one could have thought that one single component may aggravate the gun control circles so much. The lower receiver is the key component of every AR-15 based rifle, as it connects the stock, barrel, magazine and other parts. This is the part that has the serial number and other markings engraved into it. One may mill their own lower receiver at home and order the rest of the parts from online retailers, completing a semi-automatic rifle with no serial number, obtained through no background check and no waiting period. It was already given a nickname “ghost gun“. Apparently, the law prohibits selling a regulated gun component, but not making one from a scratch.

Making the best out of this legal loophole, some DIY gunsmiths have been making their AR-15 receivers for years, but Wilson is set to make the process even easier and more accessible. “Typically this has been the realm of gunsmiths, not the casual user. This is where digital manufacturing, the maker movement, changes things,” he says. “We developed something that’s very cheap, that makes traditional gunsmithing affordable. You can do it at home.”

For Wilson, this project is only one in a series of anti-regulatory and anarchic ventures. His point is that technology can render the entire notion of government obsolete. For the last two years he has been developing firearms patterns that could be printed as easy as a new page, trying to neutralize the gun control. “This is a way to jab at the bleeding hearts of these total statists,” Wilson says. “It’s about humiliating the power that wants to humiliate you. 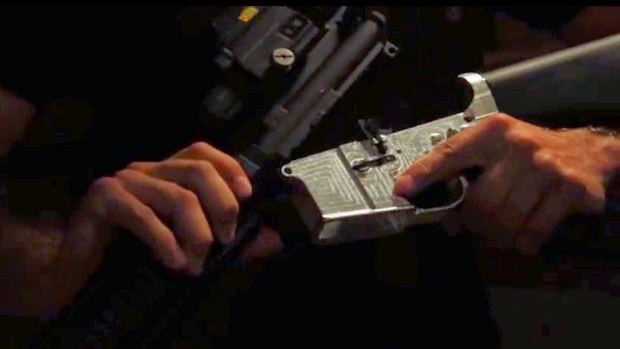 So far, Defense Distributed’s storm raising designs have included 3-D printable plastic components for AR-15s, but also a complete 3D-printed pistol, dubbed the Liberator. But the switch from 3-D printing to CNC-milling metal has made the whole concept usable. “3-D printing guns was about signaling the future. This is about the present,” he says. “You can use this machine today to create something to the standards you’re used to…The gold standard of the gun community is metal.”

The whole process of milling a metal DIY lower receiver is not as complicated as it may seem. Carving a complete receiver out of a aluminum block would be lengthy process. But there are so-called “80 percent lowers”, metal pieces shaped like a lower receiver that is about 80 percent finished. They only need minor modifications to become a working gun part. According to the bureau of Alcohol Tobacco and Firearms, the 80 percent line is the closest an object can come to a regulated rifle without legally qualifying as one. However, precisely finishing the remaining 20 percent has still required a tens of thousands of dollars’ worth milling machine. 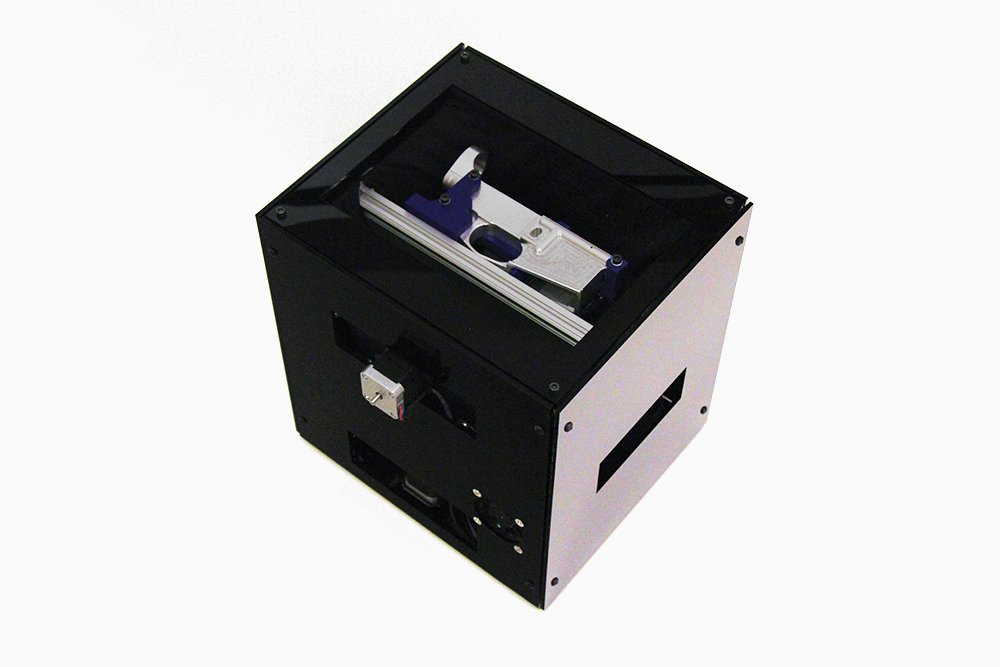 Similarly to the 3DE-printers, CNC mills are moving from industrial production to low-cost, household devices. Desktop CNC mills like Shapeoko and the Nomad cost about thousands or even hundreds of dollars. The Ghost Gunner was built with $20 open-source Arduino microcontrollers, a custom-designed spindle (the head that holds the drill) and a steel carbide bit. Defense Distributed’s mill can’t carve pieces as large as the previous two, but is more rigid and precise, thanks to its small size. It is able to cut an aluminum lower receiver from a 80 percent lower within an hour. Wilson says that would still be impossible with today’s cheapest hobbyist mills but doesn’t require five-figure professional tools. “We’re making this easier by an order of magnitude,” he says.

Aside from his anarchist ambitions, Wilson admits that the Ghost Gunner is also a money-making project. Selling their own CNC mill will enable Defense Distributed to fund its activities, unlike their previous 3D-printing projects. Offering pre-orders of the device through an Indiegogo or Kickstarter campaign was also considered, however, but both sites’ terms of service don’t allow the sale of weapons or tools for making them.

From uncontrollable 3D-printed guns to Bitcoin money-laundering software, the Defense Distributed and its first man have demonstrated a knack for throwing technological gasoline onto political fires. Wilson’s latest brainchild is surely to stir some gun control lobbyists. He released the Ghost Gunner in the heat of a debate in California over a state law that would ban the manufacture of all guns without serial numbers. The bill, widely known as the “Ghost Gun ban” and introduced by Los Angeles state senator Kevin de Leόn earlier this year was designed to criminalize either 3-D printing or finishing an 80 percent lower without a government-assigned serial number in California. The legislation passed California’s senate and assembly,  but was vetoed Tuesday by the state’s governor Jerry Brown, who wrote that he “can’t see how adding a serial number to a homemade gun would significantly advance public safety.”

The veto came as a blow to gun control advocates like state senator De Leon who have warned against the DIY lower receivers.  “New technology that makes manufacturing guns available to the general public raises questions about whether homemade guns are made by dangerous individuals [like]…criminals and the mentally unstable,” de Leόn said in a press conference last January. “The threat is real. We’re beginning to see an emerging industry and market for ghost guns…No one knows they exist until after a crime has been committed.”

To make the matters worse, police believe that 23-year-old John Zawahiri used an AR-15 built from an 80-percent lower on his killing spree through Santa Monica last year. Zawahri had a history of mental illness and had previously been denied a license to buy guns; The semi-automatic weapon he assembled from the bootleg lower receiver and parts ordered online was also illegal in California. 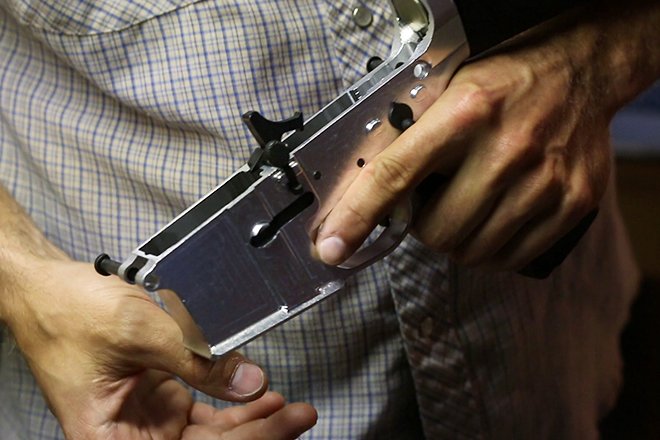 Following the governor’s veto of the Ghost Gun ban, Defense Distributed’s CNC mill could make untraceable guns even more available. What is more, Wilson has applied for a trademark for the term “Ghost Gun”, which could effectively limit how gun control advocates are legally able to use it.

“This wouldn’t be worth doing if Kevin de Leόn didn’t know about it,” Wilson says. “What excites me is giving this world to the politicians. Our strategy is to literalize and reify their nightmare, to give them the world they’re talking about.”

When asked if his milling machine can be used for crafting uncontrollable weapons that result in real violence, Wilson says that that the potential for violence is part of the price of freedom. “I believe it’s in the stable of popular rights afforded to the people, a republican ideal consistent with civil liberties,” he says. 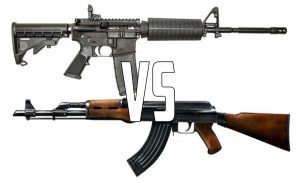