The story of the ‘broomhandle’ Mauser gun begins between 1890 and 1895, when Feederle brothers (Fidel, Friedrich and Joseph), employees of Paul Mauser, owner of the Mauser company, designed and developed a new pistol on their own accord. It was a recoil operated, locking breech, semi-automatic gun. Serial production began in 1896, the gun was patented under company’s name and the original creators practically fell into oblivion.

The gun itself, the “Red 9”, uses a short recoiling barrel with the bolt located inside the large barrel extension. The bolt and barrel are locked by the vertically tilting locking piece with two lugs that locks into the recesses on the bottom of the bolt. The gun is hammer fired. Early guns had hammers with large, round shaped hammer heads with coned sides. The safety is located at the left side of the hammer and locks the hammer when engaged.

Ammo is stored in a non-removable fixed box magazine, with a capacity of ten rounds. The gun fires 7.63 x 25 mm Mauser cartridge. It served as a basis for Soviet 7.62 x 25mm Tokarev round, developed in late 1920s. 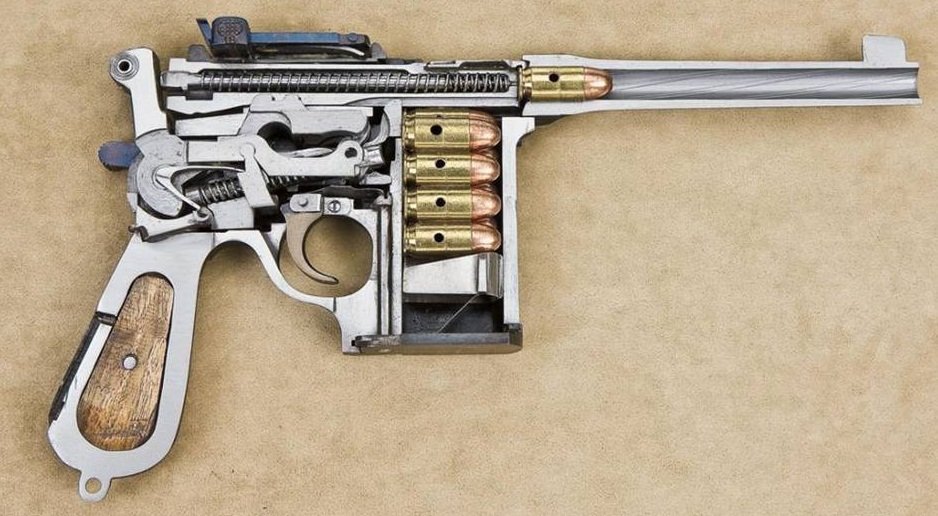 Ten round magazine was accepted as a standard since 1905, earlier models also used 6 or 20 round magazines. It’s loaded with single rounds or via stripper-clips. One of the gun’s prominent features is a distinctively shaped handle, which gave it the name ‘BroomhandleMauser’. Optional (and also distinctive) feature of the gun was the wooden stock, which also served as holster, since it was made hollow. The C-96 took its final shape in 1912, when new type of safety (marked NS – “NeueSicherung”) was adopted, along with shorter and wider extractor and smaller and lighter hammer. 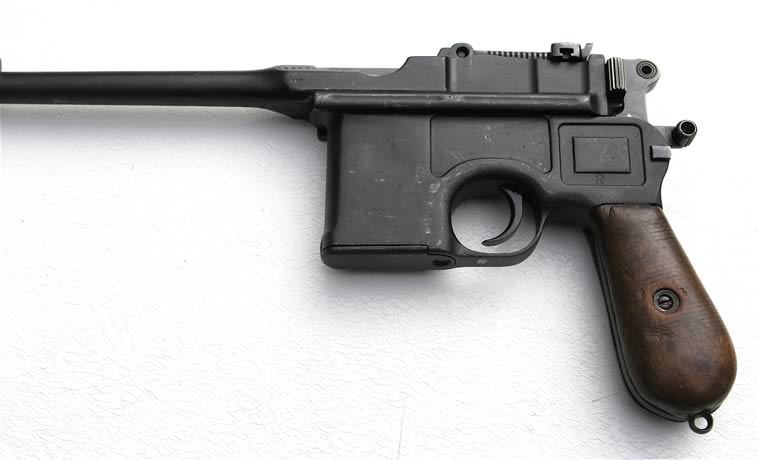 The weapon had been offered to German Imperial Army in 1896, but was rejected in 1908, after long and extensive testing, in favor of the Luger P08. Despite the rejection by the German Army, Mauser C-96 eventually saw service in the WWI. Large number of guns (several thousands) were ordered shortly after the outbreak of the war, since Lugers were in short supply. In 1917, the army ordered a new batch of Mausers, chambered in 9 mm Luger Parabellum, a round with more stopping power. To prevent any accidents due to the different caliber, each guns’ handle was stamped with a large arab numeral ‘9’, painted red.

The C-96 was produced in a multitude of variants. Some of the notable examples include the M1898 (already mentioned version with a wooden stock and holster), M1896 Kavallerie Karabiner (with “slab-sided” receiver, standard 10-round magazine, a permanently affixed wooden stock and forend, and a lengthened 300 millimeters (12”) (early production) or 370 millimeters (15”) (late production) barrel), M1932/M712 Schnellfeuer (detachable magazine-fed, selective fire, made by the Spanish BeisteguiHermanos and Astra), M1921 ‘Bolo’ Mauser (shortbarelled, 99mm, smaller grip). Nickname ‘Bolo’ Mauser(Bolshevik’s Mauser) originated after the Soviet Russia purchased a huge quantity of shortbarelled variant, in 1920s. 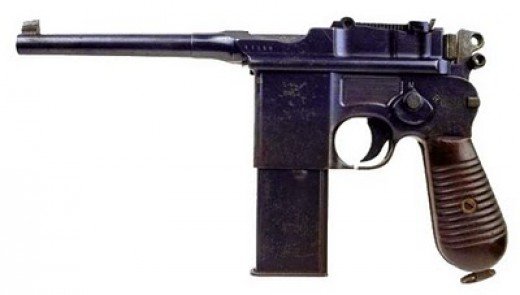 In November 15, 1899, the future prime minister of Britain, the 25 year old Winston, armed with a C-96, was accompanying some soldiers aboard an armored train with the goal of going on a reconnaissance mission in the Colony of Natal. Boer forces set an ambush by sabotaging the rail track with a big boulder. The train crashed into the rock and slowed down. Then came a hail of bullets from the Boer positions. The British soldiers returned fire, and did their best to get the injured and wounded out of harms’ way. Next move was to uncouple the locomotive, so that it can be used as a means of escape and protection from gunfire. Meanwhile, the Boer cavalry swept down the hillside, approaching the train. The locomotive, loaded with troops, managed to escape. Those who could not manage to board the train were taken prisoner. Churchill wasn’t lucky enough to get away, as he was standing in a gully near the track. One of the Boer soldiers spotted him, got off his horse and took aim with a Mauser rifle (he was none other than Louis Botha, future Boer commander general and the prime minister of Transvaal). Churchill reached for the pistol in his belt, but realized it was not there – he forgot it on the train. Defenseless, his only option was to surrender. Despite being civilian, Churchill was treated as an officer POW.

The prisoners, including Churchill, were set on a march to train transport in Pretoria, bound for POW camp. During the march, Churchill realized that he had two magazines (20 round each) of his C-96 Mauser left in his pockets. The problem was not that he had the magazines themselves, but what kind of ammo they contained. The rounds were of a ‘dum-dum’ type, expanding bullets, outlawed by the Hague Convention of 1899. The Boer soldiers despised such ammo, showing no mercy to the POW-s who had it in their possession. Therefore, Churchill needed to act quickly, in order to save himself from demise. Furtively, he managed to dispose of the magazines by dumping them in the thick grass by the road. His act was spotted by an Italian volunteer in the Boer army, CamilloRicchiardi, who spared Winston’s life, by pretending not see him dumping the notorious bullets.Ricchiardi, a well-known Italian adventurer of the time. He died in 1940, never knowing that his act of mercy 41 years prior would have such an impact on Britain and a world beset by WWII.

Maxpedition Knives – The Market Sovereign
SIG P-320: Why Are You Wearing That Glock Suit?