A recent shooting at a high school near Portland, Oregon, took the toll of one child, a 14-year-old, and many were hurt and scared. Student Jaimie Infante told CNN that at first she wasn’t aware that it was shooting she heard, and only after the assistant principal told students to go into lockdown mode did they realize it was really happening.

As the sources told CNN, the shooter appears to have committed suicide. According the law enforcement officials, they believe they know his identity and that he was a student of the same school, however, they are not ready to reveal all the details, as Scott Anderson, Troutdale Police Department Chief, said.

“This is a tragedy that affects our whole community. This is not supposed to happen to any school or to any child, but we will get through this together,” he added.

Details concerning the shooting were not available right away and it is believed that the shooter used a rifle, entering through the school gym, where he shot and killed Emilio Hoffman, a 14-year-old student of the school.

“I heard these pops and I thought they were firecrackers, but then I saw a teacher run out with his side kind of bloody,” said Hannah League, a student who hid in a classroom with some of her friends when the shooting started. “You don’t think something’s going to happen like that — especially to your school. It’s kind of, like, crazy,” she said.

The shooting caused reactions nationwide, with president Obama saying that the nation should be ashamed of its inability to pass tougher gun restrictions through Congress, claiming that such mass shootings are slowly becoming commonplace in America. He added that most members of Congress are “terrified” of the National Rifle Association and that nothing will change until the public opinion demands the change. 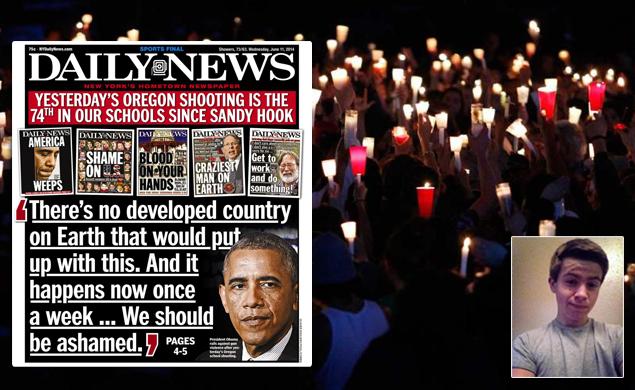 “The country has to do some soul searching about this. This is becoming the norm, and we take it for granted, in ways that as a parent are terrifying to me,” Obama said.