After President’s attempt at gun control reform failed in the U.S. senate, president Obama and his allies in congress found their hopes dashed by last Wednesday’s decision in Washington.

Now the questions arises, just how do they intend to do that? After the tragedy in Newton and collective emotional surge failed to carry them through to what can they hope for?

Well, they’re not just giving up, that’s for sure.

A California Democrat, Representative Mike Thompson still wants to introduce a similar bill in the House. He continues his efforts at persuading a moderate Republican House representative to co-sponsor his bill. The Republican said he would vote for it but wouldn’t co-sponsor it.

Rep. Thompson continued with the statement that all silent supporters need to “get involved” and call their representatives, since public opinion isn’t worth much without public involvement. After all, polls indicated 90% popular support for the bill and Democrats didn’t even manage to get 60 required votes to prevent the filibuster.

The president was exparated and Expressed anger in his White House Rose Garden address (http://www.youtube.com/watch?v=MQGoyQ-TXwo).

He said: “If this Congress refuses to listen to the American people and pass common-sense gun legislation, then the real impact is going to have to come from the voters.”
He called on the people who supported the legislation to act politically and call their representatives.

“So, to change Washington, you, the American people, are going to have to sustain some passion about this. And when necessary, you’ve got to send the right people to Washington. And that requires strength, and it requires persistence.”

What follows seems more of the same, Representative John B. Larson, D-1st District, stated that he plans to introduce a provision identical to the one that failed in the Senate. He is hoping to find a bipartisan co-sponsor. His hopes seem as wishful thinking considering he mentioned Paul Ryan, a diehard libertarian Republican as a potential ally in this. 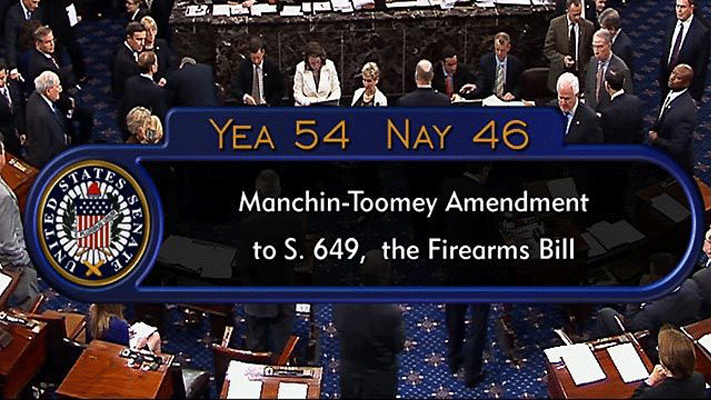 Larson argued that that kind of bill is another line of attack to reach gun control consensus after its failure in the Senate. He cited filibuster as most in need of reform, since the bill passed simple majority but needed 60 to invoke “cloture” and shut down a Republican filibuster.

For the opponents of stricter gun control, it seems that business as usual is the best path. They defeated this bill despite intense public outcry, and seem to be in comfortable position to rebuke similar attempts by continuing as before.