California’s gun-control proponents have suffered another setback. A federal judge, Anthony Ishii, has ruled that the state cannot force gun buyers to wait for a 10-day period to pick up weapons they purchased if they already own a gun or have a license to own a handgun.

The judge said that the 10-day waiting period for firearm owners unduly restricts their constitutional rights, and that such a measure is not justified by safety concerns. He pointed out that all gun purchasers, no matter how many firearms they already own, must pass a state background check of their mental-health and criminal records, which makes another full waiting period unreasonable.

He said there that evidence corroborated the fact that some gun buyers, two individual plaintiffs included, have decided not to bother with the purchase, since the expense and time needed for a second trip to a gun store.

Judge Ishii said that the 10-day waiting places a burden on people exercising their Second Amendment right to keep and bear arms.

This ruling applies only to people who already legally own guns or have a license to carry concealed weapons. First-time gun buyers will still have to wait for 10 days, since that part of the law was not challenged in the lawsuit.

It’s not all good news for repeat gun purchasers however, the state can still require all buyers to wait for their background checks to be completed before they can pick up their guns; that period can sometimes stretch to more than 10 days.

Judge Ishii has put this ruling on hold for 180 days in order to give the state time to appeal to the Ninth U.S. Circuit Court of Appeals.

This February, a panel of that court struck down a law that required a showing of “good cause” to obtain a concealed-weapons permit. They ruled that California must permit law-abiding citizens to carry handguns in public.

That ruling is also on hold until the appeals court considers the state’s request for a new hearing before an 11-judge panel.

According to Brandon Combs, executive director of the Calguns Foundation, the ruling passed this Monday is “an important step toward restoring fundamental individual liberties in the Golden State.” His company was a plaintiff in the case. 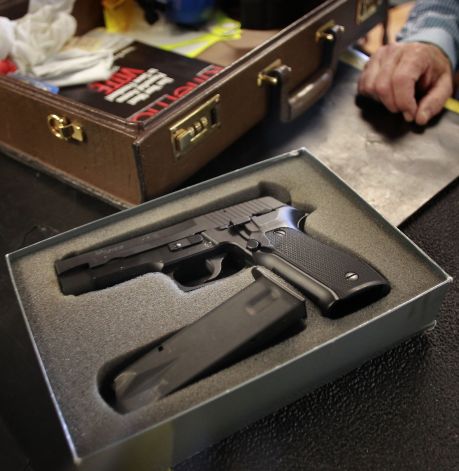 He said that this ruling casts doubt on other gun-control laws in California, including the state’s ban on gun models that can be legally bought elsewhere, the limit of one firearm purchase per 30 days, and a requirement that chambers of new semiautomatic handguns be “micro-stamped” in order to ease tracing their cartridges at a crime scene.

Lindsay Nichols, an attorney of the Law Center to Prevent Gun Violence, has called the ruling “very disturbing.” She said that the waiting period can “act as a cooling-off period” for people who buy weapons due to anger or suicidal impulses.

Ishii disputed that in his ruling, insisting that a cooling-off period was pointless for individuals who already owned guns.

Standard computerized background checks clear 20 percent of all prospective gun buyers in less than an hour, the judge said. He also said that only 10 states, of which California is one, demand a waiting period for firearm purchase.