There are many things that can be made with 3D printers and a completely functional gun is one of them. The 3D Printed gun was not so easy to make, but it was quite cheap to produce – $25 was all that was needed. On the other side, a 3D printed bullets are quite easy to make and is even cheaper.

This weekend, a man named Jeff Heeszel released a YouTube video of a man firing a shotgun. Nothing unusual about that, you’ll say, but he wasn’t shooting a regular bullet, it was a 3D printed bullet that was created at home, on a personal 3D printing machine.

This bullet didn’t perform as well as a regular bullet, but it still worked. The video shows how 3 different shotgun slugs perform while being fired from the shotgun. The targets were a wooden dart board, piece of pine wood that was 2 inch thick and a mannequin’s head. Two first targets were completely destroyed by the 3D printed bullet, while mannequin’s head wasn’t badly damaged. This short and effective YouTube video shows how powerful these plastic bullets really are. 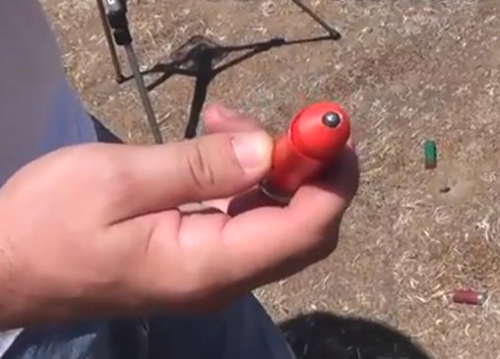 Jeff Heeszel claims that it’s not a problem to make these bullets. It’s easy and fast, he says, he spent one hour to make the first bullet for the shotgun. And the best part is, the 3D printer that was used in the process costs only $800. While Jeff and his friend made these bullets for fun, there may be other people who could use 3D printers for making not only bullets, but fully functional weapons as well. Will that ever happen on a mass scale? I guess we will have to wait and see.