Browning A5: Autoloader with High Warranty

The last year’s IWA 2013 Outdoor Classics saw FN Browning company from Herstal, Belgium overwhelming its competition. Heavy lies the crown, and whoever plays the game of thrones either wins or dies. That is why the people from Browning marked the 40th exhibition anniversary with two completely new designs. One was the brand new auto-loading shotgun named A5 and the other the new direct action hunting rifle dubbed Browning Maral.

Visitors of the exhibition were surprised to see a shotgun which reminded them a lot of the Auto 5, but with the ultra modern Kinematic Drive action. The shotgun enthusiasts are familiar with the Auto 5 distinctive features: the rear part of the receiver was bulging above the stock and many hunters were repulsed with that “unfinished” look. Its function was to prevent the hand from slipping forward from the grip and also housed the rear sight. Beauty is in the eye of the beholder, that’s for sure, but the engineers from Browning decided that among the multitude of look-alike modern auto-loaders there is a place for the old Auto 5 look once again. With the retro look on their mind, they designed an ultra-modern shotgun bearing the legendary Browning  stamp.

The new autoloader is chambered for 12/76 and 12/89 gauges. We also expect the 20/76 gauge variant, as there are almost no new 16/70 gauge shotguns. Browning A5 has five variaties; the A5 Standard, A5 Composite, A5 Camo Infinity, A5 Camo Max 4 and A5 Ultimate Ducks. The Camo and Composit models are gauged for 12/89, and the Standard and Ducks are in 12/76. All these models feature three barrel lengths; 66, 71 and 76 cm. Every barrel is equipped with interchangeable Invector chokes. The tubular magazine loads four cartridges, with the possibility of reduction to two shots, in the case of legal limitations.

Depending on the barrel length, these shotguns weigh between 3 and 3.2 kg. The Camo Infinity model has the mossy oak camo pattern, while the Max 4 is covered with Real Tree M4 protective coating. The A5 Standard features a 2nd class walnut stock and blued steel parts. The Ultimate Duck version is more luxurious and sports a nickel plated receiver and the higher class walnut stock. The Composite model is completely black, featuring a black composite stock.

This shotgun includes all the latest Browning patents which have been proven on other models. The only pioneering feature is the action, seen for the first time on this weapon. The Kinematic Drive is the action that beats all the others, because even the strongest advocates of gas-operation are adopting this new principle. The Kinematic Drive is a registered trademark, although it’s a inertial system where the massive back part of the bolt moves forward after firing, compressing the strong short spring, which then kicks it back again. By the rotation of the bolt head with four locking lugs, the breach is unlocked and the cycle is repeated. The FN company guarantees reliable operation with all ammunition loaded with 28 to 65 g. 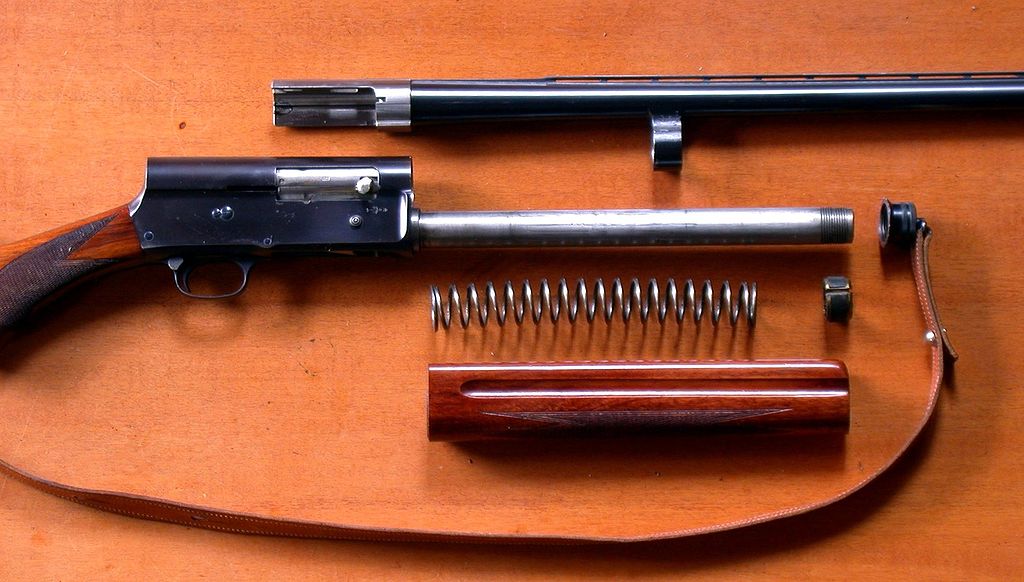 Other factories are adopting the inertial action because it’s easier to produce and the hunters love it because it’s easier to clean. The bolt handle comes easily out on the right side for the disassembly, and the lever on the rear part is easily slipped into the stock channel housing the return spring. The whole action works like a charm, with the Browning’s proprietary simultaneous loading.

The barrel is produced by back boring, and it is adhering to all Browning innovations. The manufacturer claims that the 32 mm long forcing cone will force the pellets into the cylindrical section of the barrel with minimal friction and without deformation. The end of the cylindrical section is an threaded on the inside, where the interchangeable DS choke will be screwed in. These chokes are 80 mm long and feature a number of innovations. Firstly, they are thicker and have a double edge, which prevents gases from entering between the choke and the barrel. The special copper alloy ring seals this space and also prevents the choke from unscrewing during the intensive shooting situation, which many chokes tend to do. We can surely believe the Browning engineers that a shot fired from these barrels has higher initial velocity, thickness and regular scatter on the target area, with fewer deformed pellets skimming the barrel wall. 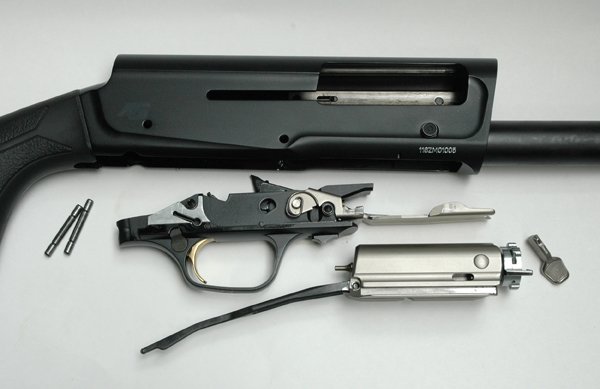 The strong kick makes inertial action always criticized by the fans of gas operation. Thanks to the new Inflex II stock shock absorber, the new interior design of the A5 guarantees much softer recoil.  The new elastic material absorbs the shock without sliding down the shooter’s shoulder and jacket. With the shotgun, the manufacturer supplies three different thickness shock absorbers, 12, 20 and 25 mm

The A5 is disassembled simply by unscrewing the front cap. There are no complications such as pistons, levers and seals which hamper the gas operating weapon. Even the main return spring is located in the stock and there is no need to remove it anytime.

After these B.A.C.O. tests, we understand why Browning, for the first time in its history, offers a seven year warranty for every A5 auto-loader, or 100,000 cartridges fired!