This superb break-action rifle is a universal hunting rifle, especially for gentlemen hunters who are continuing the Old World traditions. European hunting philosophy was based on measuring a hunter’s dexterity and wood lore with the natural instinct of the game. These hunters are reluctant to accept technical superiority of modern rifles. They hunt with pieces that don’t rely on interchangeable magazines, but one cartridge only. After the single shot is fired, the game is either dead or mortally wounded, or it has outwitted the hunter and is free to roam the wilderness. If the hit isn’t vital, bloodhounds are used to track it down as soon as possible and put it out of misery.

The stalking method, or Pirsch in German, is maybe the most exciting way of hunting. It shows the hunter’s capability to move silently through the woods. It also implies that the hunter knew how to choose his gear, for example boots that don’t make big splashes, or clothes that is not too dark neither too light for the hunting ground, and gear like binoculars, backpack, knife, sling and the gaiters that don’t make noise nor glitter in the sun. Stopping in a stalking hunt often includes continuing to walk in the place, using a branch or a mosquito screen in front of the face or freezing while leaning on the hunting stick. All these procedures are essential for you to experience the beauty of one shot hunting – and the beauty of Blaser BD14. 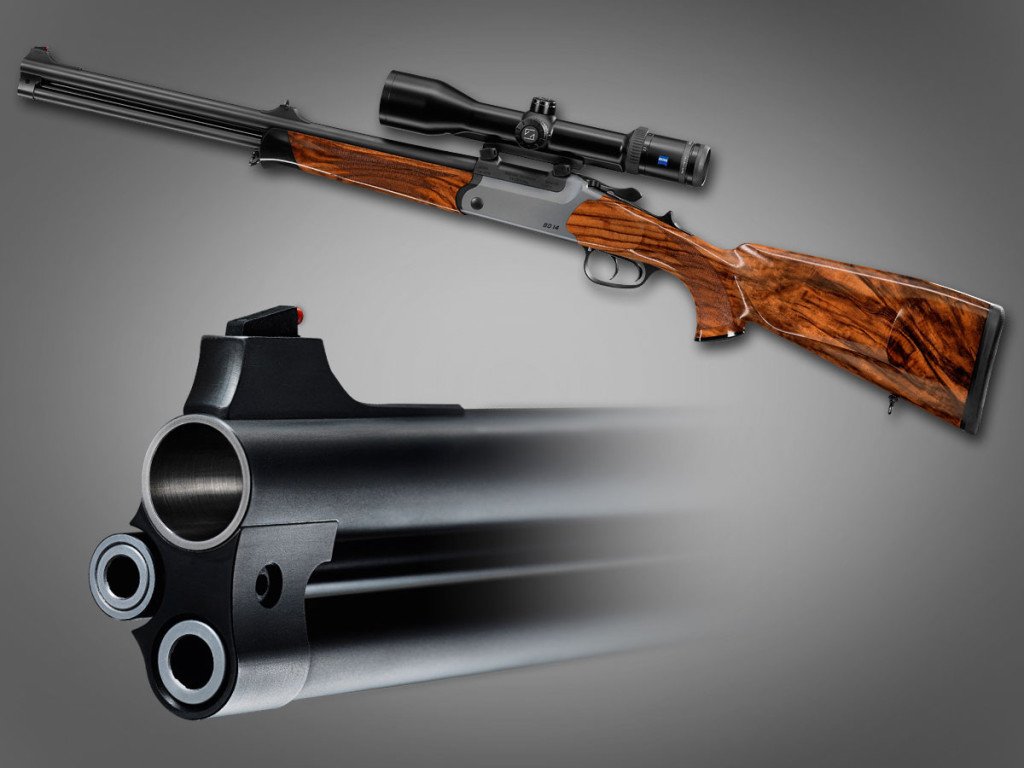 In the most developed countries with the best hunting grounds, a hunter is a hunting gentleman who during the stalking may run into a trophy predator, a varmint or any big game. The hunter is free to hunt whatever he wants and whatever the hunting calendar allows. Blaser BD14 is the rifle for such a hunter. Designed as a drilling, with the shot barrel on top, the big caliber rifled barrel is directly underneath, while the small bore rifled barrel on the right side, between those two. In German-speaking countries, this configuration is called Bockdrilling.

The shot barrel is chambered for the increasingly popular 20/76 gauge. The main rifled barrel can be chosen from a range of calibers like 6.5×55, 6.5x57R, 7x57R, 7x65R, .308W, 30-06S, 30 R Blaser, 8x57IRS and 9.3x74R. This wide choice is more than enough for hunting any big game in Europe and Americas. The side barrel can be selected from smaller calibers like .22 Hornet, .222Rem, 5.6×50 R Magnum and 5.6x52R. The 20/76 gauge, nine different main rifle calibers and four side rifle calibers will satisfy even the pickiest hunters. This all-rounder has 56 cm barrels, regardless of the caliber, and weighs only 3.3 kg. Carrying this rifle all day, even through the thickest vegetation won’t be a problem at all. It weighs like a lightweight double-barrel, and is lighter than any hunting rifle. 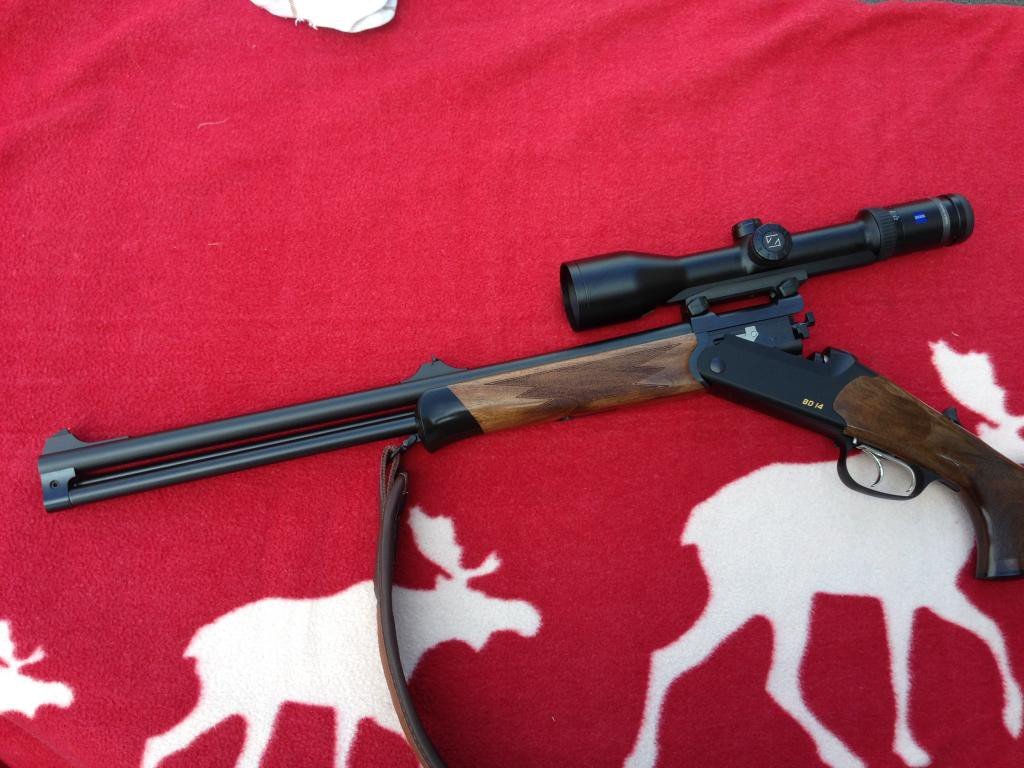 All three barrels of BD14 are connected by a sturdy forged steel monoblock at the chamber zone. It is the only point where the barrels are fixed. They are free-floating all the way to the muzzle. Don’t get confused by the clamp on the muzzle. It is only for protection, welded to the shot battle, which allows free movement of the rifled barrels, or so called temperature dilatation. It is a process when the heated barrels which has fired a several shots is leaning to the cold barrel. The free-floating construction eliminates this effect because the barrels only touch one another in the monoblock zone. The monoblock features a protrusion with a groove. The purpose of the groove is to fit a profiled locking block which protrudes from the receiver. The lock is extremely tough and based on steel-on-steel principle. In front of the front trigger there is a dedicated pin that releases this locking block, which is easy to remove for inspection and maintenance. 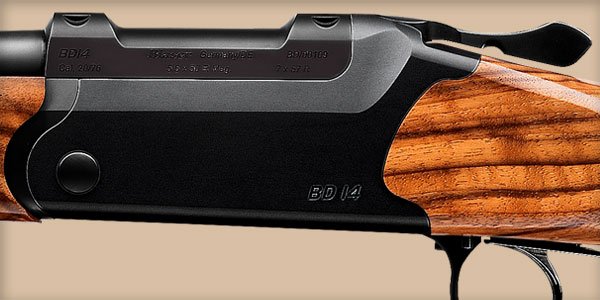 The top side of the monoblock features four machined rails for standard Blaser scope mount. The Blaser mount is characterized by ruggedness and stability even when the scope is repeatedly mounted and dismounted. For the forest hunting conditions, Blaser BD14 is equipped with an outstanding set of iron sights.  The front sight is designed as bright orange round insert while the rear sight is adjustable for windage and has two flippers – the narrow U notch or the broad U notch. The first setting is used for targeting a distant game which is stationary while the other is perfect for wild boars on the run, where the accurate aiming is impossible. Still, this elegant rifle would benefit from a quality scope like 1-4×24, 1-6×24, 1-8c24 or even 1-10×24.

Like all modern big game rifles, Blaser BD14 is equipped with a Handspannung, a device for manual cocking. All three barrels can be cocked by moving the ergonomic slider on the top of the grip forwards. Moving the slider backwards decocks the barrels. With rifles like this one, the barrels are usually cocked when the rifle is raised to the shoulder, and decocked by sliding the slider backwards when it’s lowered again. The rifle has two triggers for three barrels, aided by a fire selector. When the square indicator is raised the front trigger fires the large caliber barrel, and then it’s depressed, it fires the side barrel. The rear trigger is reserved for the shot barrel.

The rifle’s exquisite walnut stock and the receiver and the side plates are engraved, which imply that this drilling may soon be followed by a cheaper basic version. The large caliber barrel trigger can be adjusted to the minimum force of 650 g, which is on the level of sporting rifles. The manufacturer guarantees that grouping of shots fired from both barrels will fall into a 50 mm circle at 100 m, while each individual barrel will make 30 mm groups at the same distance.