After the massacre in the Newton Elementary school, firearm owners, already anxious that President Obama would tighten up the gun control legislations have gone into shopping overdrive. Large government purchases, and a plan by the DHS to purchase over a billion rounds have added fuel to the fire.

Increased demand for guns and ammunition has cleaned out stores across the country. Concerned gun owners are buying ammo, faster than stores can stock up. There are waiting list as long as two months, and most popular calibers are nigh impossible to find and their prices have soared as much as 70 percent.

Steve Warholic spends nearly all of his work hours at a Nevada ammunition store scouring the Internet trying to secure additional supplies. He is trying to find bullets for the customers at Stockpile Defense and the store’s shooting school that trains 50,000 people in firearms handling every year.

Although Warholic has managed to find new supplies, the store cannot keep up with the demand. There are 50 million rounds of ammunition on order, and he says he will consider himself lucky to get 10.

“The running joke with our distributor is that we tell him, ‘You don’t need to come to work anymore. We’ll take everything on your list,’” said Warholic.
Civilian gun owners are not the only ones affected, law enforcement agencies have also been forced into ammo saving mode. Ammunition shortage has especially struck smaller agencies that don’t have the same level of funding and supplies. A 200-member force in Richmond California, has phased out live ammo training and switched to dry fire exercises, Airsoft pistols and laser guns to simulate live fire exercises, to save both ammunition and money.

“Ammunition has tripled in price over the last decade. We now have to wait a year to eight months for a shipment,” said Capt. Mark Gagan, spokesman for the Richmond Police Department.

This spike in demand is hardly new. Surge in gun and ammo sales has been almost constant since President Obama’s election and the re-election. The economic downturn has also played into personal security fears of increased crime rates. 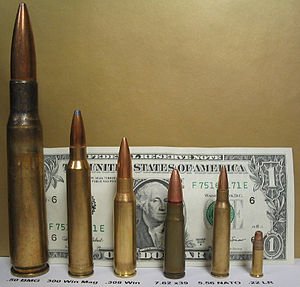 Considering low supply, gun stores have put in place restrictions, limiting the amount of ammunition any one customer can purchase. This January, Walmart created three boxes per customer daily limit.

Dick’s Sporting Goods in Bee Cave, Texas has a regular morning lines of 10 to 15 people every Wednesday and Friday, when new ammunition shipments come in. “We’re getting in anything that we can and we still sell out,” said Payton, a salesman at Dick’s. “People panic, that’s all.”

Ammunition manufacturers are reporting up to tripe digit increases in sales. Olin Corporation, which owns Winchester, reported that company’s earnings in first quarter were 190 percent higher than they were a year ago. With hundreds of millions of dollars in backorders, they have added hundreds of employees and equipment and increased overtime. Some are even running factories around the clock.

Joseph Rupp, chairman of Olin has said: “Our sales are only limited by the amount we can produce.”

Despite the increased demand, manufacturers are not planning to build new factories or significantly change their production process in a way that would increase expenses. Basically they are waiting for the surge to “blow over”, since the last one lasted only six quarters.