Home » Aero SR: The Only Survivor

Aero SR: The Only Survivor

A limited number of small arms is designed exclusively for self-defense, sports, and survival. These guns are usually highly specialized and simple carbines which fire pistol rounds. This concept has bred a series of compact, but not necessarily too reliable and accurate carbines, all of which followed one rule – they were lightweight and easy to use. They were made for fast, intuitive operation in distress, at the ranges under 100 m. One of the latest survival carbines comes from TNW Firearms, Inc.,  a little known company from Vernonia, Oregon. Aero SR (Survival Rifle) was conceived as a survival weapon, initially for pilots and their emergency survival kits. However, the rifle soon became popular among “urban survivalists” as well; the people who are preparing for major natural disasters, nuclear holocaust, zombie apocalypse, etc. These preppers are always looking for a simple, yet reliable weapon for home defense. Carbines like this one are also interesting for campers, climbers, and other outdoorsmen, whose occupation does not include firearms, but they want to have a single piece just in case. Such a weapon first of all needs to be lightweight, easy to carry and fire, especially for those inexperienced. On the other hand, it has to be accurate and effective at shorter ranges.

Without much fuss, we can say that all these features are combined in a single carbine – Aero SR. With the price between $650 and $700 it didn’t take long for it to become widely sought for civilians in the US. In a nutshell, this is a fairly simple semi-automatic, blowback operated weapon, with a long carbine barrel and stock, which is fed by standard Glock magazines. The whole system can be field stripped for cleaning and storage in no time. 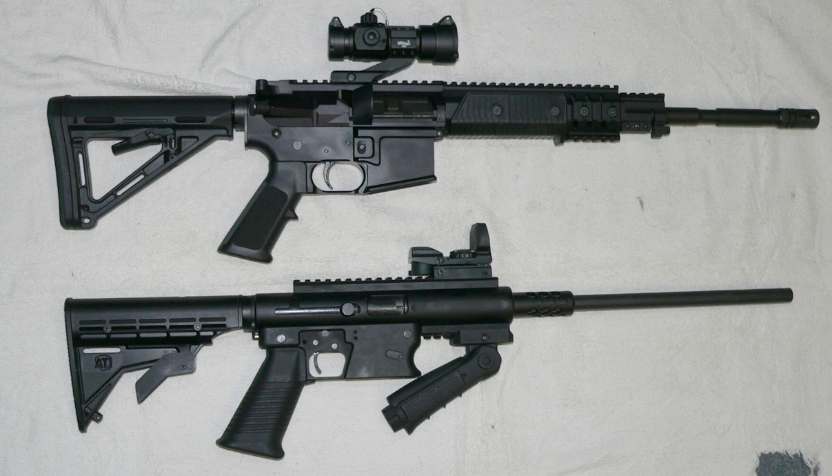 As simple as it comes

The engineers have successfully merged the simplest possible construction with a few parts and the modern, mean-ass tactical looks. What is more, at the first glance the Aero SR really reminds of the AR-15/M-16 rifle family (although they do not have any similarities in construction).

The basis of this weapon is the receiver machined from a piece of steel tube. The receiver houses a fully cylindrical cold forged barrel which is 413 mm long. The barrel has six lands and grooves, with the right twist. The barrel is fixed to the receiver by a threaded perforated hand guard, which is simply screwn into the receiver. During the field strip, first the barrel is disconnected, then the bolt and the return spring are removed from the front side. The bolt has two parts, the rear one cylindrical which makes for the easy travel through the receiver. The receiver has two ejection ports, on the right and the left side, so that when the rifle is put back together, the user can adapt it for left handed use as well. The cocking handle canal has an upwards cut canal on the rear part, where the cocking handle rests when the weapon is empty. In this way, the rifle can be carried around with empty chamber and the bolt in rear position. Pushing the handle downwards, the bolt moves forward, collects the new round from the magazine and leads it into the chamber. There are no additional safeties, as the constructor worked with the idea that those might confuse untrained users.

The bottom side of the receiver features two steel lugs which hold the trigger unit as a whole. The trigger mechanism is set into a separate steel housing with the pistol grip and the trigger guard, in front of which is the magazine well.

The shape of the plastic pistol grip bears striking resemblance to AR-15, which is a smart advertising stroke, but also a convenient feature for the American users, which are used to handling AR-15/M-16 rifles more than anything else. The magazine release button is located on the left side of the magazine well, and it is the only button to be found. The collapsible telescopic stock with the rubberized, slip-resistant butt is also AR-15-type. The design allows it to be replaced with any other similar model available in the market. The complete carbine is 830 cm long and weighs only 2,830 g.

The top part of the receiver houses a MIL-STD-1913 Picatinny rail in full length, which can accommodate all kinds of aiming devices, as the rifle comes with no built-in iron sights. The Aero SR system is delivered with a cheap Nc Star 4×30 scope, together with the mount and the rings. For an average user this is more than enough. Another, shorter Picatinny rail is attached on the bottom front side of the receiver, which enables for a front vertical grip, tactical flashlight, etc. The surface of the rifle is Parkerized in the black matte shade.

We’ve already mentioned that Aero SR is capable of semi-auto fire only and uses standard Glock magazines. It comes in 9×19 Para, .40 S&W and .45 ACP, the caliber determining the magazine capacity. For example, in 9×19 Para, the capacity goes from 12+1, 17+1 to even 33 rounds, with the extra long magazine. Also, the owners may order separate conversion kits for all these calibers. The conversion procedure is performed easily, with no additional tools and the whole process lasts several minutes. This option is offered for those who think that the time will come when a certain type of ammunition may become scarce or unavailable, so they want a survival rifle which will enable them to change between the calibers and use what ammunition they could find. In the end of the world scenario, of course.

Accuracy not only on paper

Nonetheless, in its simplicity the Aero SR is a great carbine, reliable, extremely accurate, and very controllable (due to the straight line configuration), and unbelievably easy to use. The accuracy can be attributed to the quite long barrel, but also the ideal balance (in the magazine zone) and the straight configuration which dampens the recoil and allows for quick aiming, shot after shot. The published factory testing results which show that it easily hits the targets at even 200 meters, while at 50 meters it makes remarkable groups of shots. Depending on the caliber and the ammo type, the accuracy varies between 1.5 and 2 MOA. With accuracy like this, the Aero SR is a serious defensive weapon that can be used by virtually anyone, either a complete beginner or a trained pro.

All things considered, despite the limitations of a pistol caliber which limit the hunting role, the Aero SR carbine is more than useful survival weapon, but also the emergency close quarters defender in urban environment and a home defense scenario.